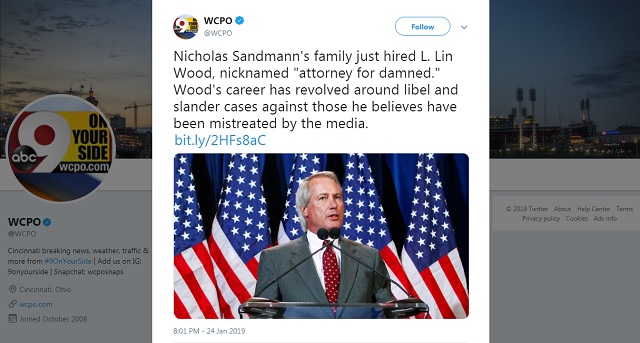 L. Lin Wood, nicknamed “attorney for the damned” by former CBS anchor Dan Rather, visited the Sandmann family earlier in the day, according to a news release from Sandmann family attorney Todd McMurtry.

“He is committed to bringing justice to 16-year-old Nick Sandmann and his family,” McMurtry wrote.

Wood “often (seeks) eye-popping damages for those he believes have been libeled or slandered in the press,” according to a 2011 Washington Post article about his defense of Republican presidential candidate Herman Cain. (Cain had been facing accusations of sexual harassment that derailed his campaign.)

Other notable clients include the family of JonBenet Ramsey, who were suspects in the child pageant queen’s murder, and Richard Jewell, a Centennial Olympic Park guard misidentified as having bombed his workplace in 1996.

“Attorney for the Damned.” Here’s some of the cases he’s been involved in according to his website:

– lead civil attorney for the late Richard Jewell in matters arising out of reporting about Mr. Jewell in connection with the 1996 bombing of Centennial Olympic Park in Atlanta

– lead civil attorney for Jeff Greene in libel litigation against The St. Petersburg Times and The Miami Herald related to Mr. Greene’s 2010 campaign for the Democratic Nomination for the U.S. Senate from Florida

– attorney for Dr. Phil McGraw in connection with false and defamatory articles published by Newsweek, the Daily Beast and the National Enquirer

– lead civil attorney for Howard K. Stern in the prosecution and defense of defamation claims arising out of the death of Anna Nicole Smith

– attorney for Beth Holloway in matters relating to the media coverage of the May 2005 disappearance of her daughter, Natalee Holloway, in Aruba and in a pending civil action against the National Enquirer in federal court in Alabama

– attorney for Sharon Rocha in matters relating to the media coverage of the December 2002 murder of her daughter, Laci Peterson

– attorney for former U.S. Congressman Gary Condit in defamation matters relating to the May 2001 abduction and murder of Chandra Levy in Washington

This is a very serious individual.

Wood appeared on Fox News on October 7th, 2018 and talked about how Judge Brett Kavanaugh should sue the media:

As we saw with the Gawker case, there’s no question the American people are sick and tired of the fake news media destroying innocent people’s lives.

I have a sneaking suspicion that if Wood drags any of these propagandists before a jury in Kentucky they’ll be eager to find them guilty.