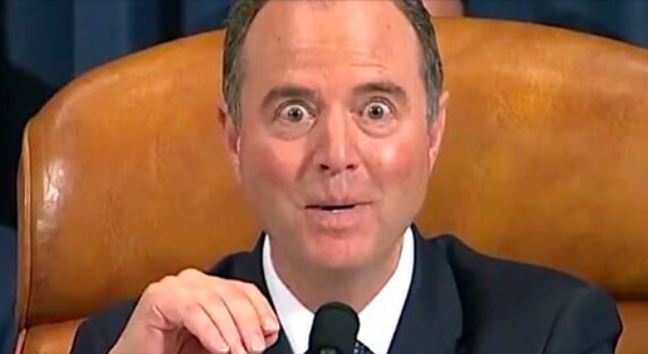 Schiff has finally met his match, someone who isn’t going to put up with his lawless, partisan, anti-constitutional, authoritarian bull-crap.

And there is nothing Schiff can do about it.

Schiff is a snake, and we all know it. He’s been using his position in Committee to hide things that put his narrative (and the people who have been spinning it) in a bad light or might exonerate the political rivals he’s worked so VERY hard to destroy.

But now, in Richard Grenell, he has met his match.

But first, a quick recap of what got us here…

Schiff has enjoyed feasting on a ridiculous amount of power in his tight little fists. He has quite contentedly used his party’s majority to shield him as he weaponized his power against his enemies.

He was almost certainly the source of leaks of classified information.

He opposed Nunes releasing the truth about what was really happening in the Russia investigation, trying to block it, trying to demonize him in the public eye, releasing a counter-narrative memo that — eventually — was shown to be as entirely worthless as the man who wrote it, while the Nunes Memo was vindicated when investigations had run their course.

Schiff assured us that he had evidence of Russian collusion — which never materialized. He was smack-dab in the center of the alleged ‘whistleblower’ conspiracy that leaked THE Ukraine Phone Call to the public, his staff flew to Ukraine before the news became public, and met with people connected to Burisma.

He demanded hearing after hearing in the Russia case, putting people on the stand (and then leaking closed meeting info to the press even before they were over. And yet he refused to release transcripts of many of these interviews.

His role as ringmaster in the Impeachment Circus will be fodder for historians generations from now. In particular, his ‘parody’ phone call fiction, his whistleblower connections with a plan to reveal him, until his own connections to him became apparent. His secret hearings and selective leaks, while refusing to release transcripts for the hearings, even when they reportedly held testimony exculpatory to the President. (We would argue BECAUSE it was exculpatory.) And he forbade any witnesses in the defense of the President that were not ALSO on the Democrats’ wish list of witnesses.

He secretly subpoenaed 1000s of phone records (Effectively granting himself the powers of a FISA judge, under dubious authority) and released private phone records of… among other people… journalists, political rival congressmen, and lawyers.

He’s a devious, power-hungry snake. But this snake has met his match.

If Schiff is a snake, Grenell is a mongoose.

There is a ream of documents relating to the now-completed Russia investigation that both parties, in a rare moment of bipartisanship, have agreed to release to the public.

Schiff has been stonewalling.

DNI TO SCHIFF: THE TRANSCRIPTS ARE READY TO RELEASE. A big development in the fight over 53 secret interviews the House Intelligence Committee conducted during its Trump-Russia investigation. Acting Director of National Intelligence Richard Grenell has sent a letter to chairman Adam Schiff notifying him that transcripts of all 53 interviews, over 6,000 pages in all, have been cleared for public release. “All of the transcripts, with our required redactions, can be released to the public without any concerns of disclosing classified material,” Grenell wrote to Schiff in a letter dated May 4.

The Intel Committee did the first probe into Russia’s 2016 campaign interference and allegations of Trump-Russia collusion. Even today, its findings make up most of what we know about the affair. As part of that investigation — it was run by then-majority Republicans — the committee interviewed some key witnesses in the Trump-Russia matter: Donald Trump Jr., Steve Bannon, Andrew McCabe, Sally Yates, Michael Cohen, Hope Hicks, and many more.

…The interviews were conducted in secret. But by September 2018, with the committee’s report long finished and made public, the Republicans who still controlled the committee decided the interview transcripts should be released to the public. In a rare moment of comity, Democrats agreed, and on September 26, 2018, the committee voted unanimously to release the transcripts. But there was a catch: The documents would have to first be checked for classified information by the Intelligence Community. So off they went to the IC — never to be seen again.

Still, back in in May 2020, they’re still secret. Two weeks ago, the Wall Street Journal editorial board reported that the IC had finished its review of 43 of the transcripts, but Schiff was refusing to release them. The paper said Schiff was also preventing declassification of the remaining ten transcripts.

In the letter, Grenell revealed that the 43 transcripts have been finished since June 2019. Schiff has been sitting on them all that time. Grenell said the final ten have just been finished as well. “I urge you to honor your previous public statements, and your committee’s unanimous vote on this matter, to release all 53 cleared transcripts to Members of Congress and the American public as soon as possible,” Grenell said. Just in case Schiff is still not interested, Grenell added, “I am also willing to release the transcripts directly from the Office of the Director of National Intelligence, as to ensure we comply with the unanimous and bipartisan vote to release the transcripts.” — Byron York at Washington Examiner

Fox reported on Shifty’s reaction to this development as being in ‘panic mode’:

Transcripts of House Intelligence Committee interviews that have been cleared for release show top law enforcement and intelligence officials affirming they had no evidence of collusion between the Trump campaign and Russia during the 2016 election, senior administration and intelligence community officials told Fox News on Wednesday.

This would align with the results of former Special Counsel Robert Mueller’s investigation — which found no evidence of illegal or criminal coordination between President Trump, the Trump campaign and Russia in 2016 — but the numerous transcribed interviews could raise further questions about committee Chairman Adam Schiff’s past statements saying that there was “direct evidence” of collusion.

What’s the matter, you little weasel?

You haven’t got something you’re trying to HIDE, do ya?

What with all these new developments with Flynn, Papadopoulos, Page and even the Mueller investigation… it’s almost like you are concerned about where exactly the breadcrumbs might lead.

Are ya getting nervous? Good.