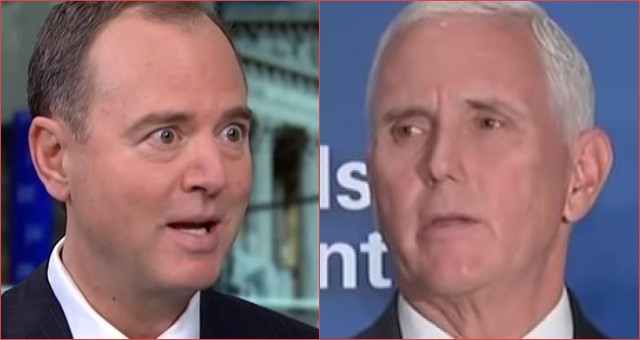 If congressmen could be charged with libel and slander, this guy would be doing time…

(TNS) The only thing worse than House Intelligence Committee chair Adam Schiff’s ridiculous, unsubstantiated claims about the Trump administration is the fact that the Garbage Party’s propaganda media continues to give him air time.

Right on cue following the Democrat-only impeachment of President Donald Trump for allegedly doing to Ukraine what former Vice President Joe Biden actually did (and admitted to), Schiff (D-Calif.) trotted up to an MSNBC camera to claim that Vice President Mike Pence is equally guilty of some kinda ‘Ukraine’ corruption.

We have acquired a piece of evidence, classified submission by Jennifer Williams, something she alluded to in her open testimony in going back and looking through her records, she found other information that was pertinent to that phone call that we asked her about and made that submission.

There is nothing that should be classified in that submission but yet the vice president’s office has said they’re going to assert classification.

It is not proper to classify something because it would be embarrassing or incriminating, and that summation does shed light on the vice president’s knowledge, and we think the American people should see it. Certainly any senators in the trial should have access to it.

But it just goes to show that there is a body of evidence, documentary and otherwise that administration figures from the president on down to include the vice president do not want the American people to see or know. And the question is will they succeed?

Will the cover-up succeed, or will the Senate insist on what we were not able to obtain in the house? And that is a White House that will comply with the lawful process.

Adam Schiff is coming after Mike Pence next. pic.twitter.com/9LZJKVSDK3

What an absolute load of BS.

When the Trump administration released the transcript of the phone call in question between President Trump and Ukrainian President Volodymyr Zelensky, it caught Schiff & Co. off-guard because presidents don’t do that (because they don’t have to — it’s called “Executive privilege” and the president has a right to protect his conversations with world leaders).

But when the administration claims executive privilege, suddenly it’s a ‘cover-up.’

And remember, this is the guy continues to claim he’s got evidence of “Russian collusion” between Trump and Putin when it has never existed because the entire narrative is a lie.

You have to give Democrats one thing: They sure are predictable.

Adam Schiff is a disgrace to the institution of Congress. But given his party’s history and reputation for destroying institutions and unraveling the cohesive fabric of our society, he fits right in.

What About Schiff’s Ukraine Ties?