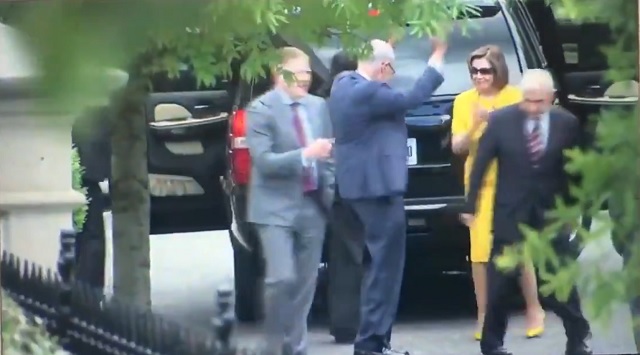 Senator Chuck Schumer was filmed cheering along with Nancy Pelosi on Thursday after leaving a meeting with the White House on Iran shooting down a US drone in the Gulf of Oman.

Our cameras at WH catch House & Senate leaders leaving the #WhiteHouse this afternoon after situation room briefing on #Iran and #Irandrone. Spotted – @SenSchumer @SpeakerPelosi @SenJackReed. Details on #CNN now on @TheLeadCNN & soon in our own @CNNSitRoom. pic.twitter.com/kOBuAOwIeG

CNN reporter Seung Min Kim tried to explain it away by stating definitively on Twitter: “Schumer was telling Pelosi he was overjoyed because his mother had just been released from the hospital and is OK. Pelosi had asked how his mother, who had been rushed to the ER, was doing.”

Schumer was telling Pelosi he was overjoyed because his mother had just been released from the hospital and is OK. Pelosi had asked how his mother, who had been rushed to the ER, was doing. https://t.co/X3BxJOqzuH

I’m gonna need at least two sources not directly connected to Schumer before believing that.

Schumer has always been a war hawk on Iran and he even went against his own president, Barack Obama, to take Israel’s side over America’s in opposing the Iran nuclear deal.

“The greatest threat to Israel in the short term is Iran, we know that. That’s why I opposed the agreement, because Iran is such a danger,” Senate Minority leader Chuck Schumer said yesterday of his opposition to the Iran deal in 2015. Schumer spoke at a breakfast of the Council of Jewish Organizations of Flatbush, Brooklyn.

[…] “I am, Baruch Hashem [thank God] the highest ranking elected Jewish official ever in America. Tell you what a great place America is– my father was an exterminator, he didn’t go to college, and his son is the highest ranking Jewish elected official.”

“The greatest threat to Israel in the short term is Iran, we know that. That’s why I opposed the agreement, because Iran is such a danger.”

“So it’s our obligation– I had an hour lunch, just me and Bibi Netanyahu, and this was the subject because it is so important.”

[…] “We have to let the young people know… the danger that Iran presents to Israel. I can’t tell you the intelligence briefings I get. I can tell you this much: The number and accuracy of the rockets that Iran has brought into Lebanon is much much greater than it was during the last Lebanese war… If Iran tells Hezbollah to send rockets into Israel, there will be much more… death and destruction…. This is a real danger. We must alert the world that Iran is not a benign country but seeks Israel’s destruction and has more power to do it than just about any country since the founding of the state of Israel.”

“That will help the young people to understand what Israel is up against.”