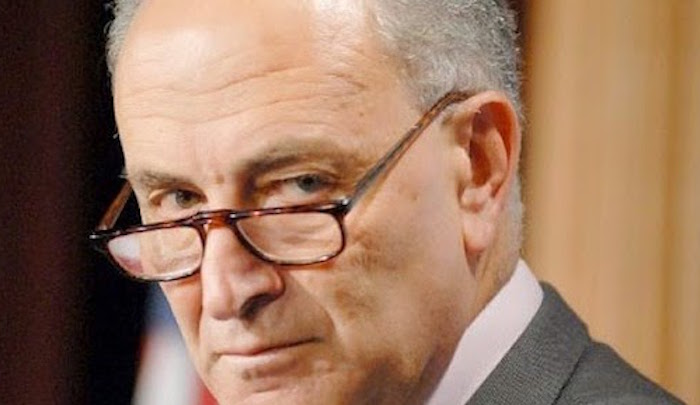 (The Olive) The Democrats have played their hand; they have shown their cards. The Democrats led by Chuck-you Schumer and Nancy no-mind Pelosi have declared loud and proud – Mr. President, there will be NO Wall!

All the Politicrats have dutifully fell in line behind Chuck-you Schumer and EVERY one of them voted no on the House bill that added billions for border security.

Some conservative commentators are saying the Politicrats refusal to fund Trump’s border wall has nothing to do with the wall itself – that is completely absurd and incorrect.

The reasoning behind the Politicrats refusal to allocate funds for a border wall is two-fold. First, the Politicrats hate Trump and all he stands for with a passion that borders on fanaticism. They will do anything to make Trump fail, even if their action(s) harm America. Second, the funding refusal has everything to do with the wall. Walls work, the Dems know this – if a wall is built, then the stream of illegals will come to halt for the most part. Illegals are where the Politicrats are going to be able to renew their voter base; a wall would be highly detrimental to their plans to regain power.

Make no mistake about it – immigrants who come here illegally will support the Politicrats. This is so much more serious then many people realize. If enough illegals fill the right voting districts across the U.S., and they vote legally (upon becoming citizens) or illegally – the Democrats could potentially remain in power permanently; the Republicans would not stand a chance in winning elections. Don’t doubt me on this, the Dems are very well aware of this – this is why they fight so hard to stop any and all funding for securing the Southern border – their very survival depends on it.

More and more Americans are waking up to the fact that despite the constant media spin, not to mention their outright lies – that the Democrats are NOT supporting ANY of the American public as they claim. No the Politicrats are using the American people to achieve their own goals as defined by the powerful Democratic leaders like Schumer and Pelosi.

The wall is more important then ever; the U.S. needs strong security at the border to stop the flow of illegals, drugs, terrorists, and disease that is being carried into the U.S. by these “immigrants.” We also need to stop the illegals for another reason – they will become the Politicrats new voter base ensuring the Dems remain in power for decades.

If the Politicrats seize power, well – we haven’t seen anything yet. This is what will happen:

If anyone thinks the above is in any way far-fetched, well you have not been paying attention.

The Democratic position on border security

Lets go back in time and review the positions of todays Politicrats just a few short years ago. The very people who absolutely refuse to allow a penny for a border wall to be built – were in FAVOR of border security. What a bunch of hypocritical sell-outs!

“Our priorities on immigration reform are clear. Our first responsibility to the American people is their safety. We must secure our borders and enforce our laws…” (emphasis mine) (source)

“Because we do need to address the issue of immigration and the challenge we have of undocumented people in our country. We certainly do not want any more coming in.” (source)

“And yet, at times you become so overtaxed you have to concentrate on saying, ‘The people who should be here are those who come legally at this time.’ And we’ve got to, for the time being, enforce our borders.” (source)

“All Americans, not only in the States most heavily affected but in every place in this country, are rightly disturbed by the large numbers of illegal aliens entering our country,” he said during the 1995 State Of The Union address, for which he received a standing ovation.

“The jobs they hold might otherwise be held by citizens or legal immigrants. The public service they use impose burdens on our taxpayers,” he continued.

So basically, not all that many years ago, the Democrats were FOR securing our Southern border. Illegals were a huge problem, and one that needed solving. Now – illegals are the new Politicrat voter base so they need to be allowed to come to the U.S. – because they serve the Politicrats self-centered needs.

It is all of a suddenly inhumane to refuse these migrants entry into the U.S. Of course once they are here, we simply have to take care of them, they need welfare, food stamps, housing, education, medical care etc. Oh, and by the way, the U.S. taxpayer needs to pay for it. Why we can’t expect these people to support themselves can we? That would be unconscionable.

The Politicrats will (and have) tell you that President Trump is pandering to his base with this need to build a wall business. Trump’s “base” is less than 25% percent of the American people, as these clueless Dems will inform you. Except that: Trump’s “base” elected him president in 2016. Trump’s “base” has raised (privately) over 13 million dollars in six days to fund the border wall that American’s do not want, according to the Politicrats.

The Politicrats (Democrats and RINOs) have become political terrorists – seizing every opportunity to serve themselves and their own power and wealth driven agendas at the expense of the American people – whom they care nothing for as demonstrated with this latest refusal to fund border security.

Its time for Americans to rise up and say enough! – tell the Politicrats that their days are numbered, and that America DOES want a secure border – which means a secure future for all Americans.

There is the “great wall of China,” and there is “the great Trump wall” for America – lets get it done!

Since 2013, Christian news magazine The Olive Branch Report has featured the insightful writing and reporting of Greg Holt. His writing has been featured on American Prophet, Conservative Firing Line, DC Clothesline, Godfather Politics, Capitol Hill Outsider, Sons of Liberty Media, Rev. Austin Miles, and others. Greg is also the Publisher and Editor of Inspirational Christian Blogs