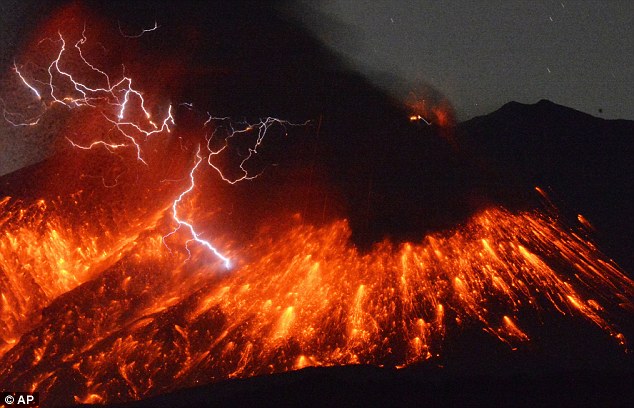 (Natural News) Yellowstone might get all the headlines, but there’s another supervolcano slowly brewing in the U.S. that could one day lead to catastrophe.

The Long Valley Caldera is considered a supervolcano by USGS volcanologists, although scientists were unsure until recently just how much magma was lying beneath it. Now, studies have shown that there’s a reservoir beneath it with more than 240 cubic miles of magma, more than quarter of which has the right composition and temperature to be liquid. Although there aren’t any signs of an impending eruption at the moment, it’s worth noting there has been an uptick in activity at the site over the last four decades.

A caldera is formed after an eruption brings magma to the surface. When magma fills the chamber below a volcano, this causes the crust to expand and the volcano grows. Following the eruption, that volume is displaced, which makes the ground above it sink down into a depression shaped like a bowl that is similar to a crater. This particular caldera is situated near the Nevada border south of Mono Lake.

Scientists note that the Long Valley caldera has been growing since 1978, likely because of an influx of magma into the chamber below it. In other words, the tank is filling up to get ready for its next eruption. While there aren’t any signs that an eruption could occur soon and the proportion of liquid magma inside could actually decrease as the supervolcano sits dormant, the possible scale of an eruption here is enough to keep scientists watching it closely.

Should all that liquid blast out of the ground, Long Valley could be just as cataclysmic as the supereruption seen at the Yellowstone supervolcano 640,000 years ago that created the caldera currently sitting on that site measuring 35 by 50 miles.

Long Valley has hot springs and a geothermal system, not to mention lots of small volcanic activity including quakes and minor eruptions of gas, magma and rocks. Its last mega eruption, known as the Bishop Tuff eruption, took place 760,000 years ago and saw 150 cubic miles of magma spewed into the air in what is the third-biggest super-eruption in recent geological times.

The blast, which created its current caldera of 20 miles by 10 times, was 2,000 times greater than the 1980 Mount St. Helens eruption. Glowing hot ash covered east-central California, with some airborne ash falling as far afield as Nebraska, while the surface of the Earth sank more than a mile into the ground. What’s in its reservoir now is enough to create an eruption that matches that.

There are three active supervolcanoes in the U.S. at the moment; the Valles Caldera in New Mexico is the oldest of the three and had its last big event 1.25 million years ago. On that occasion, it blasted 70 cubic miles of magma in an eruption that created a caldera measuring 12 miles by 14 miles.

All three hot spots are under constant monitoring because any event that takes place has the potential for huge consequences. Air traffic around much of the world would come to a stop, vast areas of land would be covered with ash, and there’s no telling how poorly the planet’s plants would fare and how that would impact human life.

Moreover, the gas that is emitted could be composed of potentially deadly chemicals. It would also set off a global climate chill that could last for decades, and experts believe it would be the worst thing that has ever happened to human society.

While volcanic gas emissions and earthquake swarms could precede an eruption at these sites, there’s still an element of unpredictability involved as these volcanic unrest symptoms can go on for decades or even centuries without an eruption. In other words, it can be difficult to nail down precisely when a supervolcano might erupt.