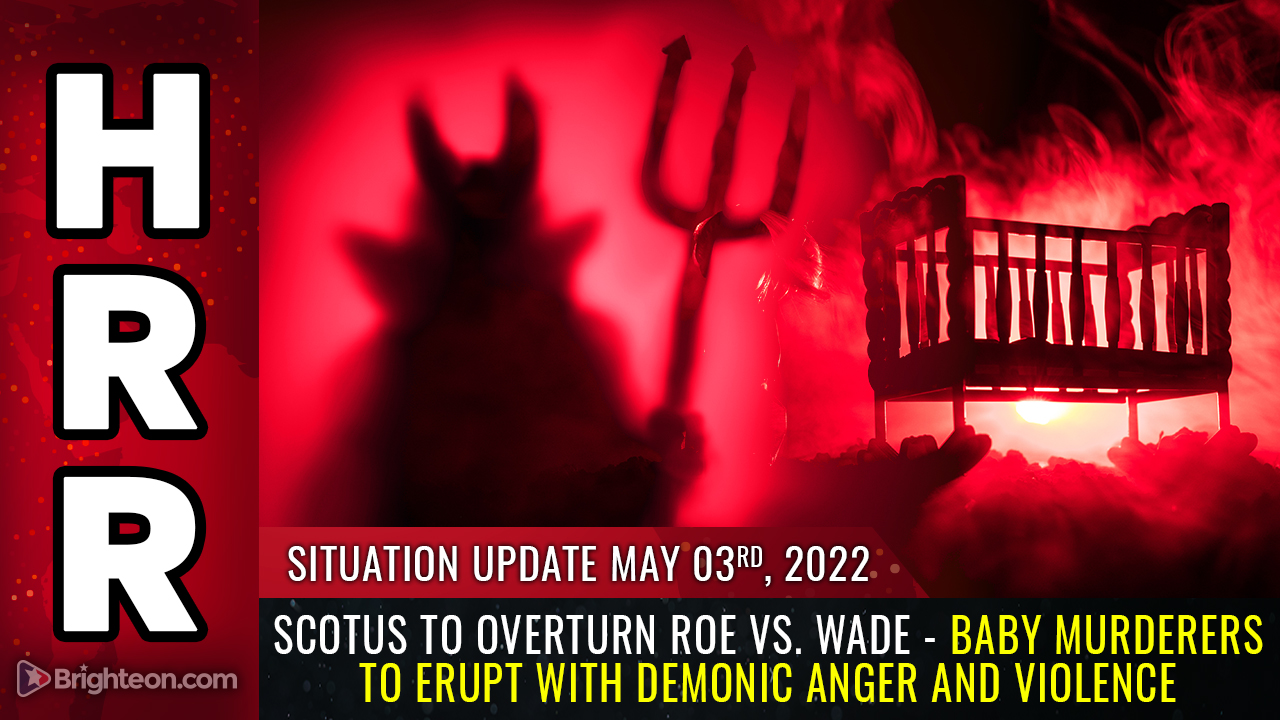 (Natural News) And now the demons come out for all to see.

The pro-abortion, baby murder advocates are already erupting in madness and anger over a leaked draft of a US Supreme Court decision that, if published, would overturn Roe vs. Wade and end federal protections for abortion.

Because the “right” to murder their own babies is the pillar of the violent, demonic, life-destroying Left, they are right now losing their minds over this, organizing protests and taking to the airwaves to denounce anyone who seeks to protect the life of an unborn human child.

Now, we are all getting to see the horrifying truth about the political Left in America: They are out for blood.

What do pedophilia, transgender genitalia mutilations, grooming and abortion all have in common? They’re all aggressively demanded by the Left (Democrats). Just about anything that mutilates a child, rapes a child, murders a child or disfigures a child is 100% supported by evil Leftists who absurdly call themselves “pro choice.”

But the child gets no choice at all. If we don’t protect the life and the choice of the unborn, then we value no life at all.

And these same people pretending to be “pro choice” demanded mandatory vaccines and mandatory masks for everyone, choice be damned.

They never believed in “choice.” They only believed in murder and violence against children. They simultaneously believe in their own “right” to murder their own unborn children while stripping away your right to say no to masks or vaccines. They are tyrants. Child-murdering tyrants.

And now they’re doubling down on that, demanding that SCOTUS alter its decision and protect the “right” to murder unborn babies in America.

Left-leaning states can still remain baby murder capitals, even if Roe is overturned

A defeat of Roe wouldn’t outlaw abortion nationwide, by the way. It would merely send the issue back to the states to decide on their own what they wish to do about the legal framework of abortion. Without any doubt, left-leaning states like California, Illinois, New York and Maryland would double down on child murder and even become abortion tourism hubs that accept pregnant women from other states who wish to murder their own children.

What SCOTUS is simply saying in the leaked draft is that Roe vs. Wade was never passed as a law and thus was never properly debated or supported by the people and their representatives. The original 1973 decision was overreaching and smacks of the kind of judicial activism that Leftists always demand for their hot-button issues.

If states like California want to affirm the “right” of abortion factories to engage in the serial murder of human babies, they will still be able to operate as murder hubs and accomplish the demonic, ritualistic sacrifice of human children that they desire. (The abortion industry is steeped in Satanism, human sacrifice, organ harvesting and worse…)

Naturally, all those engaged in abortion practices will one day have to answer to God, but at least with Roe overturned by SCOTUS, many pro-life states can declare themselves to be protectors of human children rather than murderers.

God’s wrath against America may be redirected only to those states that declare themselves to be baby murder factories.

Hold your ground and denounce the baby murderers… call them out for what they truly are: Demonic, murderous entities who fail the test of being “fully human”

Now is the time to take a stand and join the fight to protect the sanctity of human life in America. Stand up now and voice your support for overturning Roe vs. Wade. Denounce the delirious baby murderers and call them out for what they have truly become: Disgusting demons and Satan worshipers who harvest the organs and blood of children for everything from vaccine medical “research” to Satanic rituals that they pursue to increase their dark powers.

Remain peaceful but forceful in your courage and your voice: Call out the baby murderers and let them know that we know they are harboring demons and evil entities inside their biological shells. We know they want to end humanity and depopulate the planet, and that abortion is one of their key weapons to achieve that, right alongside vaccine clot shots, plastics chemicals in the food supply and chemtrail geoengineering while stripping the atmosphere of CO2 which brings life to plants and crops. The Left is at war with everything that gives live to planet Earth. They are a lunatic death cult.

We are now in the final battle for the survival of the human race, and the abortion advocates have chosen to be on the anti-human side, with Satan and his minions. Let us defeat them and dismantle their murder factories once and for all. Every human life has value from the moment of conception, and organized abortion has always been a crime against humanity.

In today’s Situation Update podcast I call out the demons and Satan worshipers for what they truly are: