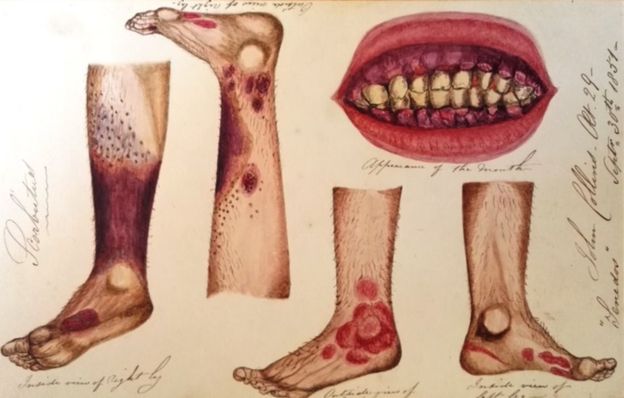 Scurvy is an ancient disease strangely making its rounds again after the last 100 years saw an eradication of it, or so we thought.

But can later progress to:

We are talking about scurvy!

It is caused by going three or more months without enough vitamin C and treated by eating more vitamin C rich foods.

Because we live in a modern, science and tech-driven world, we rarely think about deficiency-caused diseases that used to ravage and kill off the world’s population in ancient days. Lucky us! But also unlucky. Because we rarely give it a thought, we become blind to the dangers of malnutrition diseases when they quietly creep back in.

You may have heard that the sailors of yore had problems with a mysterious condition later found to be scurvy and eventually discovered that eating limes cured it. That’s where the origin for the term “limeys” comes from.

While scurvy was first documented way back in 1550 BCE by the ancient Egyptians, it is perhaps most famous for the effects it had on 18th-century mariners. Long periods at sea meant a lack of fresh fruit and veg to eat, so the disease ravaged pirates, and severely affected the British Royal Navy, whose sailors were much more likely to be killed by diseases like scurvy than through combat. In fact, it’s thought that scurvy was the biggest cause of deaths at sea – overtaking violent storms, shipwrecks, battle, and other diseases put together.

The disease has also impacted various explorers, such as those on Robert Falcon Scott’s 1901 Discovery expedition to Antarctica, the one prior to the ill-fated 1910 expedition that led to his death. Although Scott was opposed to the slaughter of penguins, his scurvy-ridden team discovered that eating fresh seal and penguin meat could massively improve their symptoms.

Today, scurvy is seen mainly in the developing world, where malnutrition is most common. But scurvy seems to be experiencing a resurgence in countries where people should have access to plenty of vitamin C-rich foods. (source)

Doctors in the developed world are spotting scurvy again

Given the symptoms list, it’s easy to see why modern scurvy would baffle doctors in the developed world. Some of them, however, are catching on.

Eric Churchill, MD of Springfield, Massachusetts, who is in a new documentary on vitamins called Vitamania, told IFL Science that he diagnosed 20-30 cases of actual scurvy in the past 6 years.

Many people who have difficulty affording food tend to go for food that is high fat, high calorie, and very filling – if you have a limited food budget, those are the meals that will fill you up and will satisfy you more than eating fruits and vegetables.

Scurvy stands out in our minds as something that is so basic and easy to avoid, and yet these people have ended up falling victim to an illness that simply should not exist in a developed country. (source)

What is causing modern cases of scurvy?

We forget that most of the world’s history battled extreme hunger and malnutrition. Getting calories by ANY means necessary was the rule of the day. It’s only the world’s top richest people and a tiny window of time in recent history that enjoyed the kind of food and nutrition of which most of history could only dream.

While kings and queens may have met their demise by their bizarrely indulgent, decadent tastes for rich foods, peasants all throughout history survived from calories derived from starches like barley-cabbage soups. If they were lucky they’d get a meat scrap here and there. But rarely. Notice the glaring lack of vegetables, greens, and fruit.

Sure, high-calorie macronutrients kept them slaving away on the fields… until they died very young. They lacked sanitation, too, and could easily succumb to infection or malnutrition.

Do you see a glimpse of history in our modern practices? Today, the poorest people living in developed nations like the U.S. eat empty, high loads of calories. Cheap food just to survive.

But in a brutal twist of irony, we are now starting to see people who are suffering from both excess and deficiency thanks to nutritionally-stripped, refined foods that are loaded with rancid, hydrogenated fats, concentrated corn syrups, processed sodium that displaces potassium and lab-created junk. We’ve got plenty of calories, but the body can only try so hard to extract micronutrients from that!

We are now left with developed nations where doctors must be on the lookout for early signs of Victorian-era diseases like scurvy, pellagra, beriberi, and rickets. Do you think Charles Dickens and Victor Hugo are sighing from beyond the grave?

Solving the problem of creeping scurvy

People who gravitate toward micronutrients like vitamins, minerals and amino acids found in a diverse diet report feeling better. There’s been more of an interest in micronutrient or whole food or plant-strong diets to overcome issues like an auto-immune disease. Perhaps some of the symptoms of modern diseases, such as bleeding gums, speaks to a diminishing vitamin C storage when under attack from pathogens.

We all know that the answer to fighting scurvy symptoms (aka vitamin C deficiency) is to eat more foods that contain vitamin C, but there’s a little more to it than that.

What you should know about vitamin C

Here are some things to consider before you journey into getting more vitamin C:

I’ve known people with colds to take 22,000mg of vitamin C before hitting the diarrhea stage. That’s obviously a mega dose and I’m not saying you should do that. Maybe it shows that the immune system utilizes much more vitamin C when we are ill.

You will notice that while these foods are top vitamin C contenders, they actually do not provide much vitamin C in each serving.

Vitamin C supplements have changed a lot in recent years. Some contain fat or bioflavonoids for greater bioavailability, some are “buffered” to soothe sensitive stomachs and many are now whole food based.

Personally, getting more vitamin C has changed my life. It has kept fatigue and colds at bay, boosted my immune system making me happier, helped me battle stress, cure UTIs and stop yeast infections, soothe gums, and rebuild collagen. It is the ultimate anti-aging vitamin! I eat plant-strong and rotate the Ester C, bio-ascorbate and sodium ascorbate mentioned above. I add dried rose hips to tea whenever I think about it.

In the developed world there is a lopsided focus on mental issues. But research shows that this wonder vitamin even helps dimish anxiety, addictive cravings, and worrisome thoughts, and that can’t be a bad thing! More proof that mind and body are connected and both need nourishment!

Tell us what vitamin C has done for you!

How do you like to take it? Will you watch the Vitamania documentary? How will you stock up on it in your preps? Let us know in the comments below!