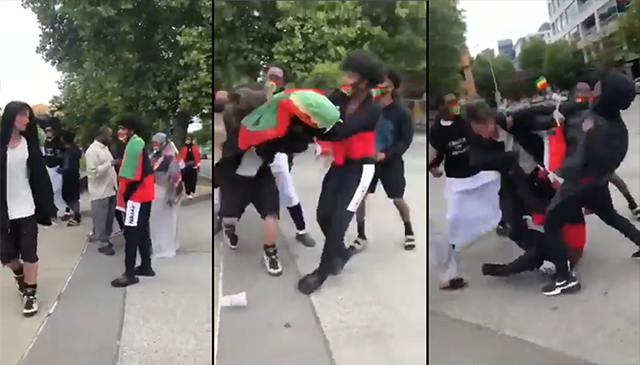 Viral video out of Seattle shows a mob of African immigrants assaulting a white man in the street while screaming racial epithets and proudly flying the flag of the terrorist separatist group the Oromo Liberation Front.

The mob is seen swarming the man — outnumbering him around 7 to 1 — and punching him repeatedly and kicking him while he’s on the ground as shocked onlookers scream in horror.

Video of the attack appears to have first surfaced on Friday.

Yo, what the hell is happening in Seattle? Who are these people with the flags? https://t.co/wMadK4J6yV

They are Oromo extremists targeting Ethiopian Christians& non-Oromo Ethiopians.Back in Ethiopia, they killed thousands of people(burned alive & slaughtered).They burned down churches & businesses. At the same time they protest in USA to show the western as they are "the victims". pic.twitter.com/ldJfgT7QCY

A victim of Oromo Nationalist terror group in Washington Seattle over spilled to USA pic.twitter.com/RS5NDxYIWA

Another group of Oromo protesters were filmed cursing America and shouting, “F**k the silent majority!”

The assault was complete ignored by the media and was only picked up by an Ethiopian site Borkena which opposes the Oromo separatist movement.