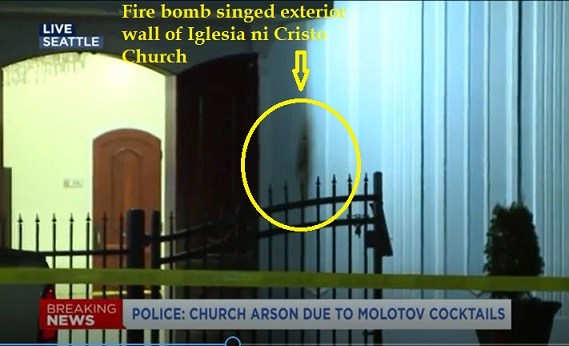 Two days ago, I posted about pro-abort feminists throwing fire bombs at a church in Trelew, Argentina last Sunday night.

Church firebombing has come to America.

About fifty people were worshiping inside the church. Fortunately, no one was injured.

Witnesses called 911 to report a fire outside the church. By the time the Seattle Fire Department arrived, the fire had already been extinguished.

Witnesses said a person had thrown lit bottles of an unknown liquid at the building. Seattle Fire spokesman Kristin Tinsley said the fire was started by several Molotov cocktail devices, which caused minor damage to the exterior of the church and some vehicles outside.

Below is a video from a surveillance camera across the street from the church, showing several Molotov cocktails exploding against the front of the church.

Seattle Police Arson/Bomb Squad detectives have taken over the investigation and are working with witnesses to develop a suspect description.

Q13 Fox reporter John Hopperstadt tweeted that church members said they had “confronted” a group of men outside the church a few days before the arson.

Iglesia Ni Cristo is an independent nontrinitarian Christian religious organization that originated in the Philippines. It claims to be the one true church and the restoration of the original church founded by Jesus, and that all other Christian churches are apostates.