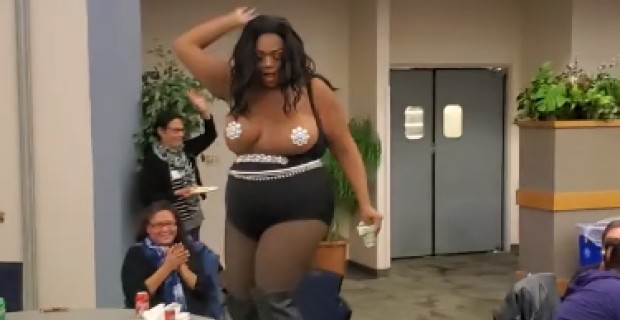 Despite complaining about a lack of money, King County leaders used taxpayer dollars to fund the performance of a transgender stripper at a recent conference on homelessness.

Beyonce Black St James was hired to twerk in attendees faces and expose his/her breasts as the audience cheered and handed over dollar bills. The stripper also gave lap dances and kissed attendees.

The theme of the conference was “decolonizing our collective work,” yet another illustration of how obscure, radical, identity politics social engineering is infecting everything.

“For years, Seattle has claimed that it “needs more resources” to solve homelessness, but as the video shows, they find it totally appropriate to pay for a transgender stripper to grind on members of the region’s homelessness nonprofits and taxpayer-funded organizations,” commented Christopher F. Rufo, who posted a video of the performance.

The event was organized by All Home, the coordinating agency for homelessness in King County, which is headed up by Kira Zylstra who earns roughly $123,000 a year. Zylstra has been put on paid leave pending an investigation.

For years, Seattle has claimed that it "needs more resources" to solve homelessness, but as the video shows, they find it totally appropriate to pay for a transgender stripper to grind on members of the region's homelessness nonprofits and taxpayer-funded organizations.

Seattle has huge problems with homelessness which will not be solved by transgender stripper performances.

As we highlighted earlier this year, a leftist council member recently tried to stop feces being cleaned off the streets of Seattle with a power washer, arguing that it was racist.

According to Larry Gossett, power washing “brought back images of the use of hoses against civil-rights activists.”

Seattle parks are also becoming no-go areas for the general public because of spiraling problems with aggressive homeless people and trash.