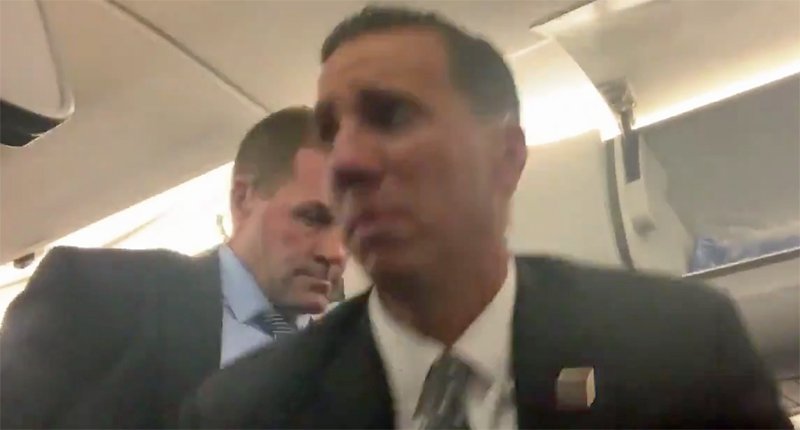 A Secret Service agent blocked the phone of a CBS reporter who was attempting to ask White House senior adviser Jared Kushner a question on Tuesday and told the journalist he didn’t “give a damn” who he was.

CBS correspondent Errol Barnett wrote Tuesday that both Kushner and his wife, Ivanka Trump, daughter of President Donald Trump, were on board his commercial flight from Washington, D.C., to New York City. Barnett said he planned to ask the couple some questions, but his recorded attempt later was thwarted by an irked Secret Service agent who told him there was a “time and a place” for such queries.

When Barnett tried to identify himself as a reporter, showing his credentials, the agent replied: “I don’t give a damn who you are.”

Jared Kushner did not answer my question and the secret service informs me, while obscuring my phone, that despite identifying as WH press, there is a “time and a place” for questions.

It is unclear when and where that is. pic.twitter.com/KRzlj3hrqw

It looks to me like Barnett tried to block Kushner’s path and the Secret Service just assumed he was a threat.

Is Kushner supposed to hold up everyone’s flight so this idiot can ask some stupid question which he already knows he will get a canned response?

Did he expect Kushner to be like, “Oh yeah, I know I didn’t talk to anyone else about this Saudi Arabia situation, but I guess I’ll just give the scoop to this random schmuck harassing me on a commercial flight who claims he’s a news reporter!” Maybe Barnett should have tried to question Kusnher while he was using the plane’s bathroom. He could just knock on the door and shout his question through while there’s a big line behind him waiting to get in!

Barnett went on to whine about the incident and act like this was some attack on press freedom on CBS News:

Anyone could put an ID on the end of a CBS keychain and say they’re with the press. It doesn’t give you special powers which entitle you to get around the Secret Service.

It looks like this great patriot agent, despite doing the right thing, is going to be put through the wringer just for doing his job:

Spox statement to @cbsnews via @ArdenFarhi

“@SecretService is aware of the video… circumstances surrounding the incident are under review… appropriate action will be taken if necessary. No further comment will be made until the incident is able to be fully reviewed.” pic.twitter.com/LgffT77Mnc