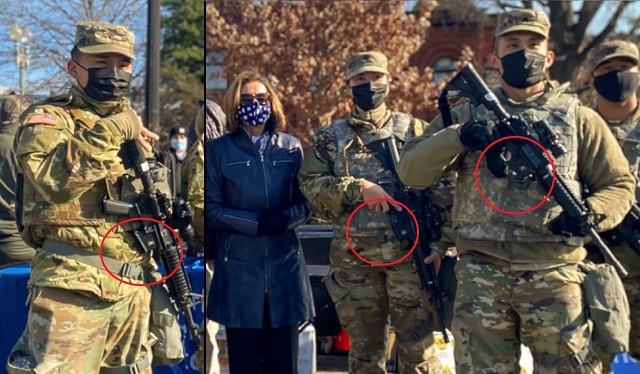 Photographs and video from Washington, DC over the weekend show National Guard troops allegedly tasked with protecting the Capitol do not have magazines in their rifles.

Look closely, there's no magazines in those guns.

Our ruling class doesn't trust the National Guard to be armed. https://t.co/c7Dfet4KYW pic.twitter.com/evFaKNEadc

National Guard are all over the streets with rifles at the ready — but none of them appear to be loaded.

This video from @RichieMcGinniss is from Saturday in DC. No magazines. pic.twitter.com/CIewAFPP5P

Same situation here with the troops McGinniss reported are surrounding "the entire perimeter" of the Capitol grounds. pic.twitter.com/F1HxG1oxdZ

For contrast, the National Guard troops protecting government buildings in Sacramento and the Illinois State Capitol both have magazines in their rifles.

For contrast, the National Guard in Sacramento do have mags in their rifles. https://t.co/QDoAtEsd8U

The National Guard protecting the Illinois State Capitol also have mags in their rifles. https://t.co/RuXCTV1ahY pic.twitter.com/b63I1RAUE1

The Army Times reported on Tuesday that the National Guard troops being sent for Joe Biden’s inauguration are being “screened” at the request of Democrats “to ensure that deployed members are not sympathetic to domestic terrorists” — i.e. Trump supporters.

From The Army Times, “After deadly Capitol riot, Army looking at which troops require security screening ahead of Biden inauguration” (HT: Amuse):

The Army is working to determine which National Guard troops assisting the Jan. 20 presidential inauguration require additional security checks, and is also offering more training on threat detection for those Guardsmen arriving to Washington, D.C., in the coming days, according to the service.

The measures come in the wake of the deadly Jan. 6 Capitol riot and after Rep. Jason Crow, D-Colo., spoke with Army Secretary Ryan McCarthy this weekend and expressed “grave concerns about reports that active-duty and reserve military members were involved in the insurrection” at the Capitol.

Crow, an Iraq and Afghanistan veteran, said he asked McCarthy for Army Criminal Investigation Command to review the backgrounds of any troops involved in inauguration security, “to ensure that deployed members are not sympathetic to domestic terrorists.”

[…] “We are working with the Secret Service to determine which service members supporting the national special security event for the Inauguration require additional background screening,” an Army spokesperson said in an emailed response to queries.

It appears as though the regime in Washington doesn’t trust the National Guard to be armed — even despite their additional screening efforts.

In contrast, Saddam Hussein — who Joe Biden told us was the worst dictator in the world to justify supporting regime change in Iraq — used to walk around in large crowds surrounded by civilians and soldiers armed with AK-47s (who were known for firing celebratory shots into the air).

Though Pelosi, McConnell, Schumer et al. have been spent the last week virtue-signalling and posing as the guardians of democracy against so-called “insurrectionists,” the latest Gallup poll shows congress has only a 15 percent approval rating

Regimists want you to believe this guy is a "domestic terrorist" who aimed "to capture and assassinate elected officials." https://t.co/Ai3UQYftEk

A YouGov poll taken immediately after the “storming” of the Capitol found 21% of Americans overall and a plurality of Republicans 45%-43% were willing to tell a pollster they “approve of the storming of the Capitol Building.”

Taken in aggregate, it’s probably the right decision for our widely-despised Congress to keep the troops unarmed!