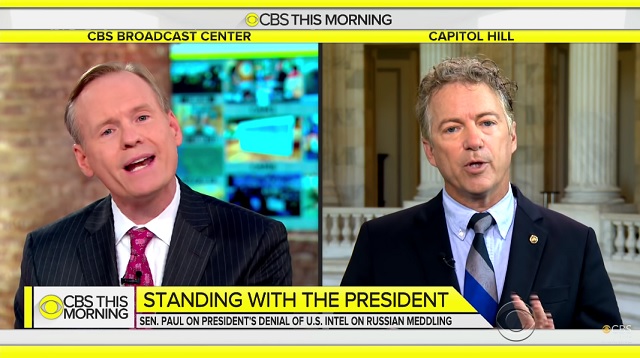 Senator Rand Paul humiliated CBS News’ Gayle King and John Dickerson on their own show Tuesday despite both repeatedly interrupting him to keep him from countering their falsehoods.

Senator Paul stuck to his guns Tuesday morning on CBS. He was asked if he was going to do a “clean-up on aisle three” in the wake of Trump’s “shameful, disgraceful, shocking” meeting with Vladimir Putin.

Paul again argued that it was a good thing for the president to meet with an adversary.

“Senator, I don’t think anybody would object to trying to have a good relationship with Russia,” said This Morning host Gayle King. “The problem is he seemed to throw the intelligence community under the bus while doing that.”

Paul strongly disagreed with her contention that no one would object to having a good relationship with Russia.

It’s hilarious how these news hacks don’t even read the news. (Fortunately, the #MeToo movement cleared out all the establishment shills with actual talent.) The entire neocon/neolib establishment is completely opposed to the US having a good relationship with Russia because they know it would threaten their globalist racket.

“This is an extraordinary thing about President Trump that should be lauded and not belittled, that he’s willing to meet with adversaries to try to prevent us from having World War III.”

“You have to understand that we have to deal with the world as it is, not as we wish it to be,” he added later. “If we’re only going to talk to people who have perfect, constitutional republics, we’re going to have a very small audience and we’re going to have a lot of potential conflict with no outlet for diplomacy. So no, I think the president did a good thing by meeting with Putin and I think it’s a mistake for people to try to turn this into a partisan escapade.”

John Dickerson made similarly idiotic false arguments, claiming that because Reagan called the Soviet Union an “evil empire” at some point he’s totally different than Trump.

Though Dickerson tried to keep Sen. Paul from countering his point by pivoting to another question, Paul interrupted him and said, “I’ll respond to that, Reagan also sat down with Gorbachev and didn’t call it an evil empire in a press conference with Gorbachev.”