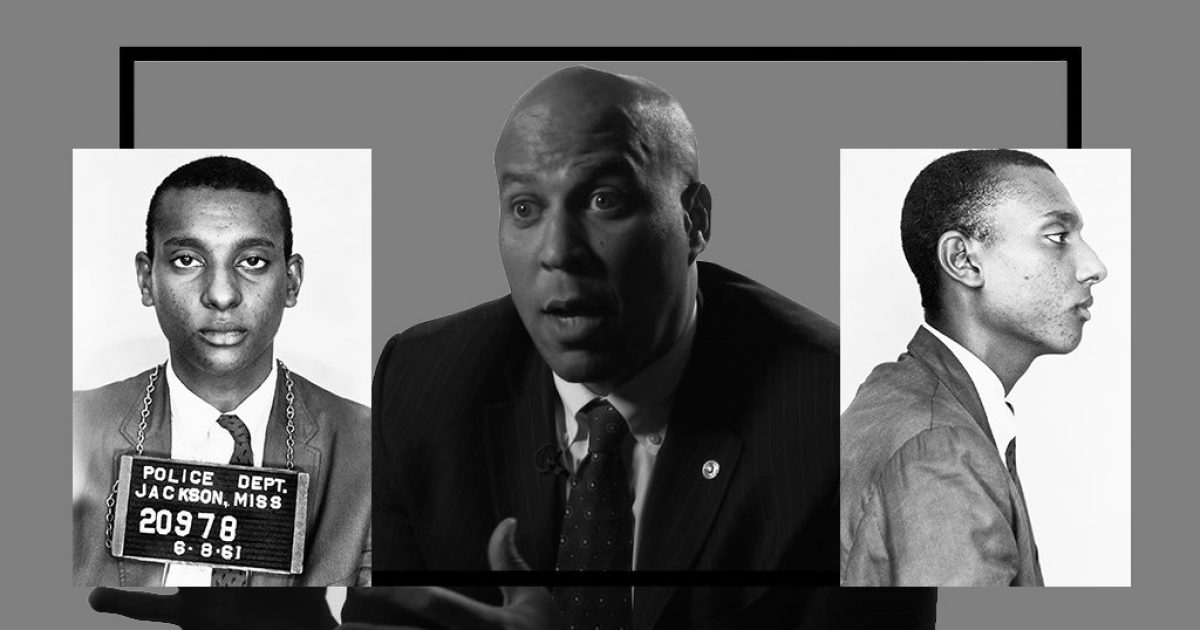 Supreme Court nominee Brett Kavanaugh’s confirmation hearing was the beginning of the Democrat 2020 primaries, and the winner was the Senate Democrat who yelled the worst possible thing.

That was Senator Cory Booker.

Unlike some Senate Dems, Booker didn’t just confine his attack to Brett Kavanaugh, a mild-mannered man widely beloved by both the Democrats and Republicans who worked with him, he went for broke.

The Founding Fathers were racist geniuses, Booker insisted. Their constitution was flawed. Originalism, interpreting the Constitution as it was written, rather than whatever social justice activist the Dems had managed to plant on the bench, is going to be racist and sexist, because its authors were deplorables.

Who is this “civil rights activist”? A violent racist who had called Adolf Hitler “the greatest white man”.

You can see why Booker might have hesitated a bit when using him to bolster his claim that the Founding Fathers of this country were flawed racist sexist men. Even though, unlike Booker’s civil rights hero, they didn’t admire Hitler or call for the mass murder of Jews.

Senator Cory Booker doesn’t yawn without first rehearsing it before three staff members and two consultants to extract the maximum amount of pathos from each fake gesture. He had been regularly delivering the same attack on the Constitution as a stump speech. You can find Senator Cory Booker bleating the same basic remarks last March at SXSW before a much friendlier lefty audience.

“Look, our founding documents are saturated — unfortunately — are scene with replete through them, these examples all those darker strains of human nature,” Booker held forth at SXSW. “Native Americans are referred to as savages, women aren’t referred to at all. Blacks are, you know Stokely Carmichael used to say, constitute constitute I can only say three-fifths of the word.”

Booker appeared to have also quoted Carmichael in June of last year and again in July of this year.

There are examples going back several years, with Booker saying, “Stokely Carmichael said it best: we are the leaders we’ve been looking for.”

In a July interview this year, his Stokelyite attack on the Constitution was even harsher. “Yeah, if you read the Declaration of Independence now, you see the Native Americans referred to as “savages.” And women are clearly, by their omission, a second-class citizenry. Stokely Carmichael — I love how he used to always say, ‘Constitu-, constitu- — I can only say three-fifths of the word.’”

But the sneering line about the Constitution isn’t Stokely’s most famous quote.

Two others are way ahead of it: “The only good Zionist is a dead Zionist we must take a lesson from Hitler” and “The only position for women in SNCC is prone.”

Anti-Semitism has become socially acceptable among Democrats, but the party that sent in activists to scream that Brett Kavanaugh was a horrible sexist and a sexual harasser by association is okay with Stokely’s sexism and Booker’s admiration of him. The left’s standards, like its vision, are all double.

Stokely Carmichael, better known as Kwame Ture, was a leftist bigot who had called for racist violence.

Black Panther Mark Essex burst into a New Orleans hotel, shouting, “I want the whites!” He murdered a young honeymooning couple, hotel guests and staff members, and a number of police officers. Stokely Carmichael praised Essex, saying, “We should study and learn from the actions of Brother Essex. We should understand that Brother Essex carried our struggle to its next quantitative level, the level of science.”

Carmichael had also declared, “I’ve never admired a white man, but the greatest of them, to my mind, was Hitler.”

“Go home and get your guns,” Carmichael had urged after Martin Luther King’s death, “When the white man comes he is coming to kill you. I don’t want any black blood in the street.”

“We are preparing groups of urban guerrillas for our defense in the cities,” he warned in Communist Cuba. “It is going to be a fight to the death.”

Stokely Carmichael burned through the SNCC and moved on the Black Panthers, but his violent hatred of white people proved to be too much even for the black nationalist hate group. But Booker’s hero nurtured a particular hatred of Jews. And his anti-Semitic threats led to actual anti-Semitic attacks.

Nor did Carmichael have any objection to that.

“Zionist pigs have been harassing us everywhere,” he warned at the University of Maryland, “And when this anger rises, will snap our fingers and finish them off.”

Senator Booker has repeatedly quoted a violent racist. At the Kavanaugh hearing, he cited an attack on the legitimacy of our founding documents from an advocate of a socialist black nationalist revolution through mass murder, a supporter of Saddam Hussein, Gaddafi and assorted murderous dictators.

And yet there’s nothing extraordinary about it.

Carmichael’s anti-Semitism had been defended in the past by Rep. Keith Ellison, the number two man at the DNC and Dem nominee for Minnesota Attorney General. He was attended by Rep. Maxine Waters.

Americans are treated to non-stop lectures about racism from top lefties like Cory Booker. But they are the ones who are the most in need of those hectoring lectures about the evils of racism.

It’s a problem of black racism. And until it’s taken seriously, there are no other conversations about racism worth having. When the top figures in the Democrat party are okay with anti-Semitism and racism, then their political faction and its media apparatus has no right to lecture on racism.

In October 2016, Booker tweeted a photo commemorating Farrakhan’s Million Man March. “May the unity and spirit of the march continue to live on,” he wrote, over a photo of a marcher brandishing a poster that included Louis Farrakhan. No complex interpretation of hand gestures is needed here.

Farrakhan, like Stokely Carmichael, is a racist and anti-Semite who admires Hitler. And he’s a pal of presidents and politicians. Including the men who lecture us on how racist the Founding Fathers were.

There is a deep racist and anti-Semitic disease in the leadership of the Democrats. As Senator Cory Booker brings his hatred for the Jewish State to the Senate, he should be asked whether he agrees with his hero, “The only good Zionist is a dead Zionist we must take a lesson from Hitler”.