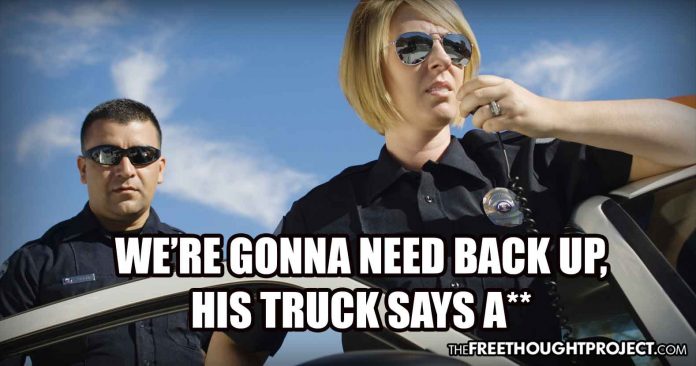 Editor’s Note: Freedom of speech means accepting people’s rights to be tasteless, as this young man certainly seems to be. I have 6 children. When something is inappropriate we talk about it. That is how kids learn. To throw someone in jail for a bumper sticker is one of the silliest things I have ever heard. -Dean

Lake City, FL — Freedom of speech, in the land of the free, is not guaranteed. Despite the wording of the First Amendment, claiming that “Congress shall make no law…abridging the freedom of speech,” there are countless laws across the country designed to do exactly that. However, even when there aren’t archaic anti-speech laws on the books, police will all too often deprive people of their freedom — for practicing their freedom. A Florida man learned this the hard way when he was arrested this week for a sticker on the back of his truck.

Dillon Shane Webb, 23, was pulled over this week by a Columbia County sheriff’s deputy. Webb had broken no traffic laws, was not a threat to anyone, and was not suspected of committing a crime. He did, however, have a sticker with the word “a**” on the back of his truck.

The deputy claimed the sticker on the back of Webb’s truck which said, “I EAT A**,” violated Florida’s obscenity law, so he targeted Webb for extortion and kidnapping.

“They’re just words,” Webb told the deputy after being pulled over.

“I then asked Dillon how a parent of a small child would explain the meaning of the words,” the deputy wrote in his report. Webb then responded rationally, telling the deputy that would be up to the parent.

Indeed, it would be. But this deputy just knew that Webb was a hardened criminal hell bent on destroying all that is good by putting a sticker on his truck saying that he eats things deemed inappropriate, so he issued the 23-year-old a notice to appear in court for the ‘obscenity violation.’

The deputy then told Webb to remove part of the sticker so it wasn’t offensive. “I allowed him to remove one of the letters from the word ‘A**’ so the statement would no longer be derogatory.” But, he said, Webb refused to do so, citing the First Amendment, according to Gainsville.com.

The deputy clearly couldn’t have cared less about the First Amendment.

For refusing to remove the sticker, the deputy then arrested Webb, charging him with resisting an officer without violence, a first-degree misdemeanor. Webb was kidnapped and thrown in a cage and he had harmed no one. His bail was set at $2,500.

The deputy then had Webb’s truck towed and impounded, assuring the community that they wouldn’t have to see the word a**. Problem solved.

Actually, the problem was not solved and this deputy likely created a legal situation for the taxpayers of Lake City in which they will be shelling out thousands to pay for Webb’s unlawful arrest.

When looking at Florida’s obscenity law, it appears that it mostly applies to pornography and displaying it as such. The words “I EAT A**” can hardly be considered pornography and can hardly be considered the display of such. While these words are certainly tasteless, to kidnap and cage someone for having them on their truck is grossly more offensive.

Sadly, in the land of the free, a person can be kidnapped and thrown in a cage for arbitrary sounds made with their mouth or words on a vehicle that cause harm to no one.

Aside from this being clearly asinine, it’s well-established by the Supreme Court to be unconstitutional.

In Cohen v. California, the U.S. Supreme court upheld a citizen’s First Amendment right to wear a jacket to court that read “F**k the Draft,” the court held:

“FOR, WHILE THE PARTICULAR FOUR-LETTER WORD BEING LITIGATED HERE IS PERHAPS MORE DISTASTEFUL THAN MOST OTHERS OF ITS GENRE, IT IS NEVERTHELESS OFTEN TRUE THAT ONE MAN’S VULGARITY IS ANOTHER’S LYRIC. INDEED, WE THINK IT IS LARGELY BECAUSE GOVERNMENTAL OFFICIALS CANNOT MAKE PRINCIPLED DISTINCTIONS IN THIS AREA THAT THE CONSTITUTION LEAVES MATTERS OF TASTE AND STYLE SO LARGELY TO THE INDIVIDUAL.”

Here at the Free Thought Project, we feel there are no such things as ‘bad words’ but, rather, certain words some people don’t like to hear.

The arbitrary nature of government enforcing laws that dictate what vocabulary a person can use is as ridiculous as it is tyrannical. Sadly, it remains a part of society.

Telling people what words they can and can’t say to ‘protect’ others is chilling. Freedom of speech does not come with terms and conditions as words alone, less the obvious yelling “fire” in a movie theater, cannot cause physical harm.

Have we learned nothing from history?