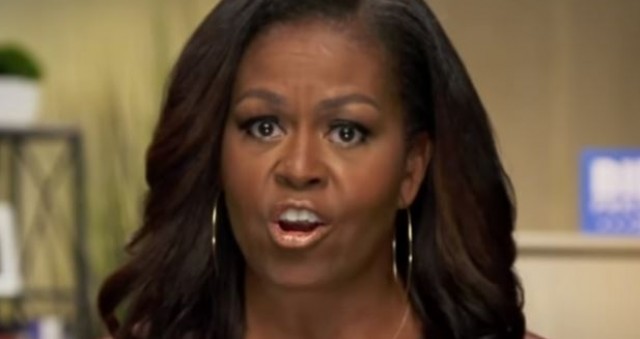 Fox News reports that Obama claimed she and her husband, former President Barack Obama, faced too much pressure from their “community” to be able to replicate unspecified actions of the Trump administration.

In another attempt to slander President Trump Michelle Obama refuses to stay out of the spotlight as she discusses on her podcast how she and Barrack were never able to “get away” with things President Trump is doing.

She must have forgotten the 8 years our nation had to suffer through Obama’s presidency and the close personal ties with the Clinton’s enabled them to flourish while our nation suffered. She must be oblivious to Benghazi and how her husband denied military aid to save lives.

Fox reported, from her podcast:

“When we were in the White House, we could’ve never gotten away with some of the stuff that’s going on now,” she said.

“Not because of the public,” she added, “but our community wouldn’t have accepted that. You worked, you did your best every day. You showed up.”

For my final episode of The #MichelleObamaPodcast, I brought on my wonderful mother and brother @CraigMalRob to talk about everything from our upbringing to our approaches to parenthood. It’s one of my favorite conversations of the season. Listen in: https://t.co/L8FgSZGAkG pic.twitter.com/2XnbKSSJYo

When she discusses her “community” she is not talking about all citizens of The United States that they were supposed to be serving, but rather the black community.

As The Hill reported, Michelle Obama said “almost everybody” she knows has had “some kind of incident where they were just minding their own business but living Black, and got accused of something.”

“When you leave the safety of your home and go out into the street, where being Black is a crime in and of itself, we have all had to learn how to operate outside of our homes with a level of caution and fear, because you never know,” Obama, 56, added.

Michelle Obama is simply adding fuel to an already out of control fire that is going on everyday in our nation. This isn’t about black vs white, though that’s what mainstream media would have everyone believe and it is because of people like Michelle Obama that the chaos continues.

The conversation in her podcast discussed, though briefly, about Black Lives Matter and the Police interaction, The Hill stated the following:

Referring to nationwide protests against systemic racism and police brutality sparked by the May death of George Floyd while in the custody of Minneapolis police, Obama said, “The fact that there are people out there that treat us less than, when we’re working so hard to be better than, that’s where the pain comes from. That’s what these young people are so angry about.”

“The notion that people are out there wondering about these protests,” Obama said, “it’s like, do you know how much it takes, that it takes to get up everyday, and be accused of being less than what you are?”

Instead of using her reach to help end the chaos, she simply justifies what is going on and uses racism and police brutality to further burn the nation into a frenzy.