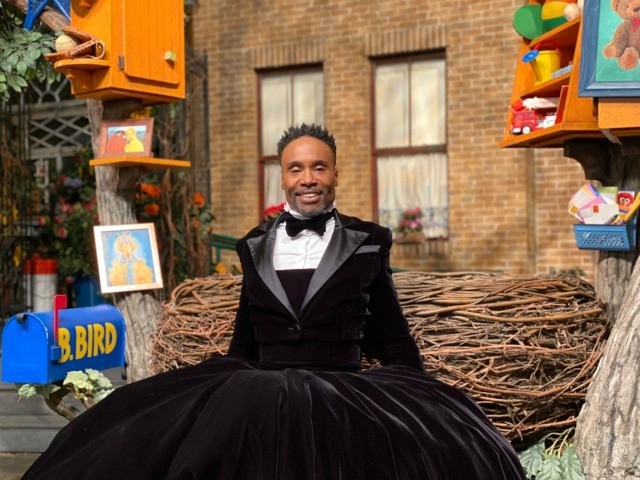 What the hell is wrong with America?

The other characters, minus Bert and Ernie, are liable to be enraged about this.

This is not really funny, sorry.

It is, in contrast, quite frightening.

Sesame Street will soon put a man in a dress in front of your kids.

The PBS children’s show Sesame Street announced that Emmy, Grammy, and Tony Award-winning actor Billy Porter will be featured wearing his Oscars dress when the program returns to TV for its 51st season, set to premiere on HBO Max later this year.

The photos shared by the TV show reveals that Porter visited the set wearing his voluminous velvet tuxedo gown and jacket by designer Christian Siriano that Porter wore to the 2019 Academy Awards show.

The Pose star took to Twitter and called his appearance “iconic” and said he was “tickled to meet Elmo.”

Y’all, talk about iconic… I was tickled to meet @elmo and the gang at @sesamestreet! https://t.co/WuEpjRkRi8

Who out there thinks this is a good idea?

Again, we are poisoning the minds of many to protect the “rights” of a few?

Your “rights” cease to be rights when they infringe upon the rights of others.

No one is stopping anyone from being a drag queen, or whatever you call this.

What we are trying to protect here is young and impressionable minds.

Young people have a right to navigate their own way through life without having a filthy LGBT agenda shoved down their throats.

The agenda is real and they are coming for YOUR kids.

As you might notice in the links above, even when a library system rejects these clowns a liberal mayor is liable to step in and overrule them.

Libraries are one thing, because most of these appearances are being seen by a handful of children.

Stay Vigilant America — They Are Coming for OUR Kids.