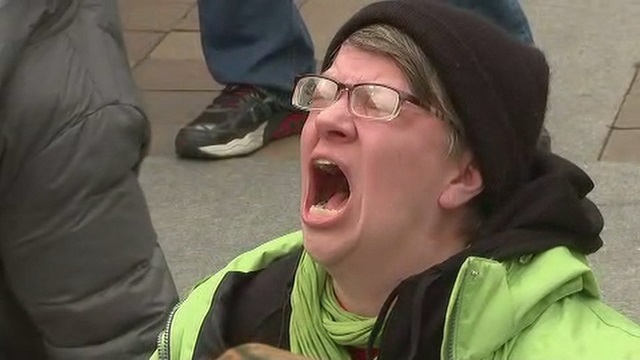 Leftists responded with rage and anger after Cherokee Nation came out on Monday to criticize Elizabeth Warren for “undermining tribal interests with her continued claims of tribal heritage.”

Warren earlier in the day released the results of a DNA test conducted at “a private lab in Georgia” which said she might possibly be anywhere from 1/64th to 1/1,024th Native American (which means she may have less Native American DNA than the average white American).

“Using a DNA test to lay claim to any connection to the Cherokee Nation or any tribal nation, even vaguely, is inappropriate and wrong,” Cherokee Nation Secretary of State Chuck Hoskin Jr. said in a statement. “It makes a mockery out of DNA tests and its legitimate uses while also dishonoring legitimate tribal governments and their citizens, whose ancestors are well documented and whose heritage is proven. Senator Warren is undermining tribal interests with her continued claims of tribal heritage.”

Elizabeth Warren never claimed to be part of your tribe

You're literally on the same side Einsteins – FOCUS!!!!

If facts matter in determining membership, the fact is that she never claimed to be part of your tribe or that she was seeking tribal membership. Not only that, 45 has used racist language to denigrate her heritage, which is the reason for the test.

You don't understand. Please don't do everything but call my brothers and sisters, " dumb Indian's ". It seems so simple to you. You have not seen your culture all but killed over years of " being grateful " for nice people's cast offs. We fight to retain our culture. DNA. squat.

She never claimed tribal citizenship. She simply claimed that she has some native blood in her ancestry and the DNA proves exactly that.
Why is Cherokee Nation backing Trump on this?

She has never attempted to claim tribal membership nor represented herself as a native person of any tribal affiliation for any purpose. She has this story as part of her family lore and believed it. Her political opponent turned it into a dirty trick.

Why are you giving those who want to cast Elizabeth Warren in a bad light, who've enjoyed calling her Pocahontas as a slur, any ammunition like this without cause? Did she EVER say anything about want to gain anything because of what she felt was an endearing family story, hunh?

Somehow every liberal who claims to be a Cherokee managed to post a response.

As a person with Cherokee heritage and tribal citizenship I am curious as to why you took this stance? You’re okay with Trump calling her Pocahontas and referring to Natives as Indians?We have bigger issues than a woman who respects Native Americans & didn’t ask for a blue card.

I'm a tribe member. That stuff in the Judge Parks room in your little museum downtown was donated by me. He was my great grandfather. I'm horrified with your stance on this issue, and you should bow your heads in shame. Did she demand a blue card? No? Who's pulling your strings?

I don’t know if any of those people are actual members of the Cherokee Nation, but I do know libs’ favorite argumentation tactic is to falsely claim they were, or are part of a group before criticizing them.