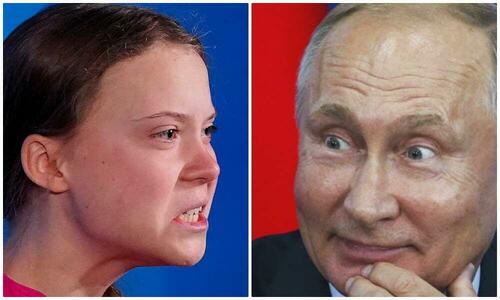 “People think nothing could have been done to prevent Russia from invading Ukraine, but that’s absurd,” bravely writes outspoken realist Michael Shellenberger in a Twitter thread that is bound to get him accused of being ‘treasonous’ or promoting ‘Russian propaganda’, instead of merely opening the forum for discussion of other opinions than the one driven into the West’s citizens by an every-ready establishment media.

As Shellenberger points out (obviously to many), “if Putin thought the costs of invasion outweighed the benefits, he wouldn’t have done it. He’s a rational actor not a madman. And today it’s clear Putin calculated correctly.”

…and the White House said, “Our sanctions are not designed to cause any disruption to the flow of energy from Russia to the world.”

People who believe that nothing could have been done to prevent Russia from invading Ukraine thus imply that Russia’s chokehold over European energy supplies was inevitable, but it wasn’t. Europe could have easily increased, rather than closed, nuclear plants and natural gas.

Britain could have increased fracking for nat gas but didn’t. Why?

Europe could have kept operating and expanded its nuclear power plants but instead, under pressure from climate activists, including Greta Thunberg, shut them down…

Climate activists even forced nuclear-heavy France to throttle its nuclear plants so order to use more industrial wind energy. The result was significant outages over the last few weeks at a time when French nuclear plants were needed most.

Efforts to make Europe less energy independent, and thus more dependent on Russian gas imports, were led by powerful banking interests in coordination with climate activists and center-Left parties around the world.

Not satisfied with their successful efforts to make Europe dependent on Russia, global elites have sought to deny poor African nations abundant energy.

All of this happened in plain sight at Davos, the European Commission, and U.N. conferences

The ideological justification for energy scarcity long predates climate change. In the 1960s, radical Left activists abusing their authority as scientists claimed that the world was running out of energy, despite the fact that nuclear proved that energy supplies are infinite.

The reason pro-scarcity “greens” attacked nuclear was because it debunked the idea that we faced resource scarcity and environmental degradation from overpopulation.

When asked if he had been worried about nuclear accidents, a Sierra Club anti-nuclear activist said, “No, I really didn’t care because there are too many people anyway … I think that playing dirty if you have a noble end is fine”

California saw electricity prices rise 7x more than the rest of the US over the last decade, is experiencing blackouts, and intends to shut down its last nuclear plant

The goal of Western elites is energy scarcity

They are the ones now saying nothing could have prevented invasion

What the US, Canada, Europe, Japan, South Korea, Australia and other Western allies must do is obvious and urgent: we must massively expand nuclear energy and oil and gas production. This will lower energy prices and reduce exposure to Russian use of energy as a weapon of war.

The public needs to understand that Russia could not have taken Ukraine had the West expanded energy production rather than throttled it by closing nuclear plants and reducing oil and gas production.