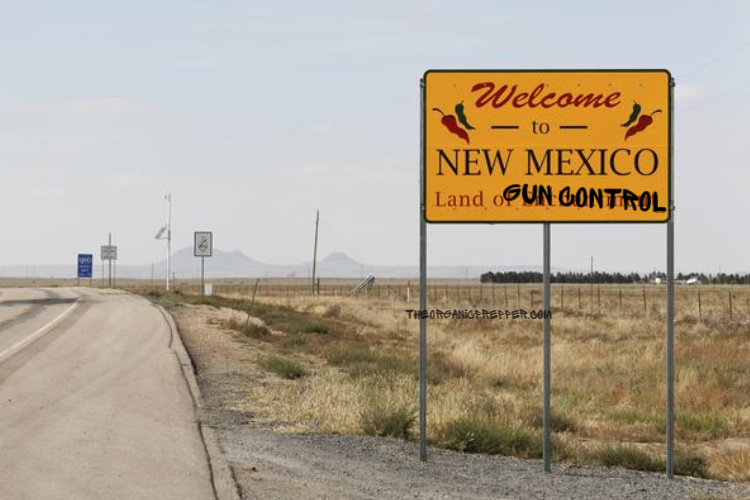 New Mexico has a new governor, and she really doesn’t like guns.

In early December, the National Rifle Association (NRA) warned the citizens of New Mexico to expect “unprecedented attacks” on their Constitutional rights.

While the New Mexico Legislature will not convene for its 60-day Regular Session until January 15, lawmakers can start prefiling bills on December 17. You will see unprecedented attacks on your Second Amendment rights from the word go. Your NRA-ILA will alert you to bill numbers and provide links to the content of legislation as it becomes available. But in the meantime, we want to share with you what we already know is coming.

Expect anti-gun politicians to introduce a slew of so-called “common-sense gun measures” — a misleading phrase that gun control activists use in hopes that the public and the media will avoid questioning the bills’ enforceability, efficacy, intrusiveness or necessity. (source)

Unfortunately, the NRA’s prediction was correct.

As of the time of this writing, six bills have been filed.

Here’s a summary of each of the six bills.

The state House approved HB 8 last week, which aims to make it a misdemeanor crime to sell or transfer a gun in a private transaction without a background check performed by a third party. A Senate committee has passed their own version of the bill, slammed by gun rights groups, in a party-line vote. (source)

House Bill 35: This bill, sponsored by Representative Miguel Garcia, would require gun dealers to pay a $200 fee so that the New Mexico could screen every gun coming into their inventory for “potential theft.”

House Bill 40: Also sponsored by Representative Miguel Garcia, this legislation would require criminal records checks on private firearms sales at gun shows. Gun grabbers tend to see gun shows as a particular threat, even though studies show that they are not a source of guns used by criminals. This bill – and HB 8 – would ban many or all private gun sales, and set the stage for a registry of gun owners.

Perhaps the most disturbing of the six bills is House Bill 83.

Have you heard of “red flag” gun confiscation laws?

Officially called Extreme Risk Protection Orders (ERPO), “red flag” laws permit police, healthcare providers, or family members to petition a state court to order the temporary removal of firearms from a person who may present a danger to others or themselves. To date, fourteen states and the District of Columbia have red flag laws.

Here’s a chilling explanation of what House Bill 83 would allow.

Under section 5, any law enforcement personnel can ask a court to issue an order stripping any New Mexican of his Second, Fourth, Fifth, and Fourteenth Amendment rights. It wouldn’t even take an “ex parte” secret court proceeding; the request could be made by E-MAIL.

Under section 6, an angry ex-girlfriend can convene a “secret court” (ex parte proceeding) to strip a gun owner of his Second, Fourth, Fifth, and Fourteenth Amendment rights — without giving the gun owner the opportunity to tell his side of the story to the “secret court.” (source)

In October 2018, Maryland’s red flag law went into effect. Less than a month later, the law claimed its first victim.

Gary J. Willis, a 61-year-old Maryland resident, was killed by police when they showed up at his home at 5 am to serve him with a court order requiring that he surrender his guns.

Anne Arundel County Police said Willis answered the door with a gun in his hand. He initially put the gun down by the door, but “became irate” when officers began to serve him with the order and picked up the gun again, police said.

Sgt. Jacklyn Davis, a police spokeswoman, said “A fight ensued over the gun.” Police claim that as one of the officers struggled to take the gun from Willis, the gun fired but did not strike anyone. Then, the other officer fatally shot Willis, who died at the scene. Neither officer was injured.

Davis said she did not know who had sought the protective order against Willis.

But Michele Willis, the victim’s niece, said this was a case of “family being family.” (source)

From October 1 to December 31, 302 petitions were filed across the state. A majority of the red flag orders were filed by family members or household members, primarily about mental health concerns, with others being placed by law enforcement officials or health professionals, according to the Associated Press. Less than half reached a final stage in which the accused was not allowed to have a gun for at least a year.

House Bill 87: This legislation would impose a gun ban on persons committing crimes as minor as damage to property. It expands the state’s “prohibited person” firearm law by incorporating federal firearm disqualifications. For example, it would prohibit individuals convicted of certain domestic violence misdemeanor crimes or who are subject to a domestic violence protective order from purchasing or possessing a firearm, with violations being a criminal offense. But, the bill goes beyond the prohibited categories in federal law in significant ways, as the NRA explains:

The state law definition of “household member” – unlike federal law – specifically includes a person who is or has been a continuing personal relationship, which applies to dating or intimate partners who have never lived together. The bill would include, as firearm-prohibiting offenses, nonviolent misdemeanors with no physical contact between the parties (like harassment by telephone or email, or criminal damage to the property or jointly owned property of a “household member”). Unlike federal law, this bill would require anyone subject to a protective order to surrender any firearms they own, possess, or control to law enforcement within 48 hours of the order. Not only does this bill impose a mandatory surrender, it authorizes law enforcement to seize any guns that are in plain sight or are discovered pursuant to a lawful search. Similar legislation had passed the Legislature in 2017 but was vetoed by Gov. Susana Martinez. Significantly, the 2017 legislation contained other options for affected parties to comply with the firearm surrender requirement, including storing their guns with licensed firearm dealers, or transferring the guns to a qualified third party. These key alternatives are not contained in this bill. (source)

House Bill 130: This bill would potentially make criminals of people who keep loaded firearms for self-defense. Sponsored by Representative Linda Trujillo, if signed into law, gun owners would be held criminally and civilly liable if a child gains unsupervised access to an unsecured firearm. But as the NRA points out, “New Mexico already has a first-degree felony child abuse statute on the books to hold adults accountable for putting children’s lives or health at risk in any manner. The tools exist to charge and prosecute parents or guardians in appropriate cases. Education is the key to protecting gun owners and their kids, not a state mandate on how one stores a firearm in his or her home.”

These bills are facing opposition from a powerful force: the Sheriffs.

Thankfully, most of New Mexico’s sheriffs are opposed to these gun control bills. Of the 33 sheriffs in the state, 29 have voiced disapproval of the package of anti-gun legislation by issuing a declaration through the state sheriffs’ association, stating that the “rush to react to the violence by proposing controls on guns is ill-conceived and is truly a distraction to the real problems proliferating violence in our counties and our state.”

CBS 7 spoke with Lea County Sheriff Corey Helton, who explained why he objects to the proposed legislation.

“You’re just taking guns out of law-abiding citizen’s hands. This is not going to affect the criminals out there. They’re going to be able to get guns and they do not follow the law.” Helton added that there are enough effective laws on the books and these new measures are either redundant or unconstitutional.

“I’m proud to say I’m a constitutional sheriff and I’m just not going to enforce an unconstitutional law,” Helton said. “My oath prevents me from doing that.”

Similar gun control measures are going to spread like wildfire across America.

Did you catch what Caleb Califano, the reporter, says at the end of that video? He mentions that Helton said, “these introduced gun control bills are a trend that will continue, not just in New Mexico, but all around the country.”

Speaking of that, in Texas – of all places – red flag gun confiscation legislation may be coming, according to a February 6 alert posted by Gun Owners of America.

Governor Abbott announced his “emergency” agenda items Tuesday and included school safety with an emphasis on “mental health.” While no bills have been specified yet, this could easily include items such as “red flag” type legislation that we have been fighting all across the country that allows for gun confiscation simply because a judge decides that you might misuse them in the future. (source)

Recently, Washington state introduced bills for some of the strictest gun laws in the country, and a few law enforcement officers there publicly vowed not to enforce the new unconstitutional gun laws. In The REAL Resistance: Sheriffs in Washington State REFUSE to Enforce Unconstitutional Gun Laws, Daisy Luther made a powerful point:

Legally speaking, our county sheriffs are the last line of defense in the battle for gun rights.

As we have stated before, unconstitutional gun law ideas seem to spread from one state to another like some kind of insidious virus.

This is just the beginning.