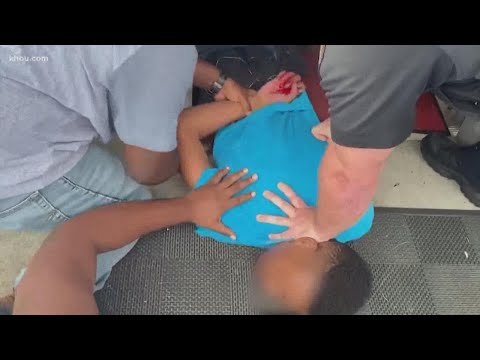 We have a feeling you won’t see this on the evening news.

In another bloody incident of violent crime caught on tape, an assailant armed with a knife slashes at least two terrified men on a subway car in NYC. The incident was filmed by one very steady-handed bystander.

Since the riots that swept NYC and other cities during the George Floyd protests, crime in New York has come soaring back to levels not seen in decades as Mayor de Blasio has taken hundreds of undercover officers off the streets and moved to lay off thousands of NYPD employees as part of a massive budget cut to the country’s biggest policing force.

This isn’t the only stabbing incident we’ve seen lately. In Houston, a group of bystanders were recently filmed helping police subdue an unhinged attacker at a gas station on Fuqua Street in southeast Houston.

At first, it seems the man filming had the audacity to tell the officers who were arresting the attacker “don’t put your hands on his neck now”.

In response, the officer calmly explained his technique, clearly showing how he had his hand on the suspect’s back, before inviting the person filming and other bystanders to help hold the man down while he was being handcuffed.

Field’s video has hundreds of thousands of views. On Thursday, musician Timbaland shared it on his Instagram page with the comment, “they got it right this time‼️”