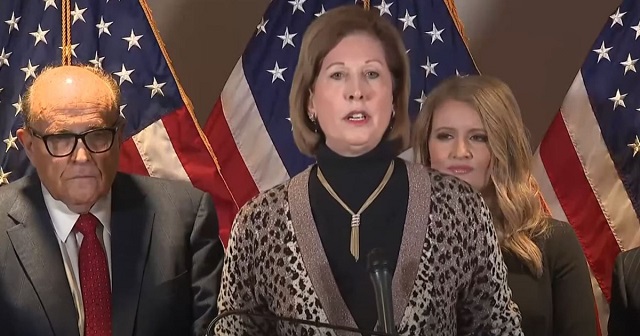 UPDATE: Sidney Powell responded to the Trump legal team’s statement that she was not part of their official team by saying she is going to forge ahead with her lawsuit representing Americans “who had their votes for Trump and other Republicans stolen by massive fraud through Dominion and Smartmatic.”

“I understand today’s press release,” Powell said in a statement to CBS News on Sunday night. “I will continue to represent #WeThePeople who had their votes for Trump and other Republicans stolen by massive fraud through Dominion and Smartmatic, and we will be filing suit soon. The chips will fall where they may, and we will defend the foundations of this great Republic. #KrakenOnSteroids”

Powell: I agree with the campaign's statement that I am not part of the campaign's legal team. I never signed a retainer agreement or sent the President or the campaign a bill for my expenses or fees. My intent has always been to expose all the fraud I could find…

We are proceeding to prepare our lawsuit and plan to file it this week. It will be epic. We will not allow this great Republic to be stolen by communists from without and within or our votes altered or manipulated by foreign actors…

Tucker Carlson calls on Sidney Powell to release evidence of her claim that votes were moved illegitimately by software from Trump to Biden.

He says he would have given her "the whole hour" on his show but she refused to provide evidence and told them to stop contacting her. pic.twitter.com/Lft18ZZbvq

President Trump had previously said Powell was part of his “team.”

Gen. Mike Flynn said Powell was suspended from Twitter but intends to continue making her case

I hope she succeeds.

That said, I started having reservations about Powell after she retweeted someone making the ridiculous claim that Trump won California. While Dominion Voting Systems is very shady and was installed in Georgia entirely by Republicans without a single Democratic vote, Powell was making very far-reaching claims about millions of votes being swapped throughout the country.

Her attempt to spin this as a communist conspiracy sounded rather far-fetched. Even though Smartmatic does have interesting ties to Venezuela, America’s e-voting machines historically were pushed mostly by Neocons

SIDNEY POWELL: "I can hardly wait to put forth all the evidence we have on Dominion. It was created to produce altered voting results in Venezuela for Hugo Chavez, then shipped internationally to manipulate votes, for purchase, in other countries." pic.twitter.com/6atR0RAbtA

Her claims were no doubt causing the GOP to panic that it could cause them to lose the two Senate seats currently up for grabs in Georgia.

Powell said Georgia GOP Gov. Brian Kemp is 'in on the Dominion scam.' Accused Kemp and GA Secretary of State of accepting financial benefits in conspiracy to defeat Trump. Evidence? 'I can't give you any more details.,' she said. From @newsmax 2/2 End. https://t.co/OAzEckDLzV pic.twitter.com/a3XWv4OJf5

Powell had said she was going to provide her evidence over the weekend. She had better get crackin’ on releasing the Kraken!

Personally, I think Rudy Giuliani has been doing a much better job regardless and whatever evidence she’s compiling can likely still help.