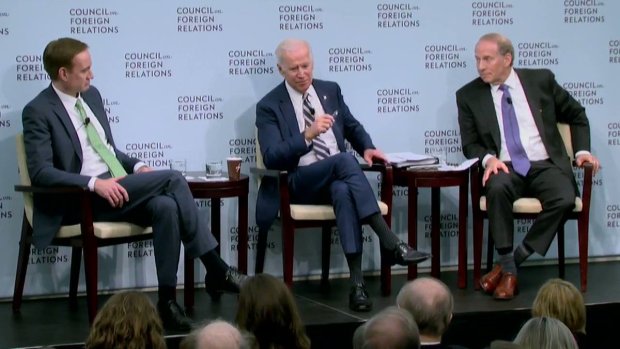 BUSTED: That Time Joe Biden Threatened The Ukrainians Who Were Investigating His Son, Hunter

(NationalSentinel) As the garbage “mainstream” media gins up another fake “scandal” involving allegations from some unknown “intelligence community” staffer that President Donald Trump made ‘inappropriate’ requests to the Ukrainian government, we find out that the real guilty party is…a Democrat.

You may recall that reports this week claimed Trump asked the Ukrainian president to look into allegations that former Vice President Joe Biden’s son, Hunter, engaged in some business deals in that country that daddy may have helped set up.

The ‘stink’ is that Trump allegedly threatened to withhold arms and other aid to Ukraine unless they helped his attorney, Rudy Giuliani, with the probe.

That’s not appropriate for a president to do! the lying media all screeched.

Only…the allegations against the Bidens not only appear to be valid, but that scumbag ex-vice president of ours actually bragged about how he threatened to withhold Obama-era aid from the Ukrainians if they failed to fire a prosecutor looking into son Hunter’s business dealings.

The video below should be Exhibit A in any subsequent prosecution the Justice Department brings.

Biden is a piece of crap, straight up. And his party is one big pimple on America’s a**, enabled by garbage media propagandists pretending to be journalists.