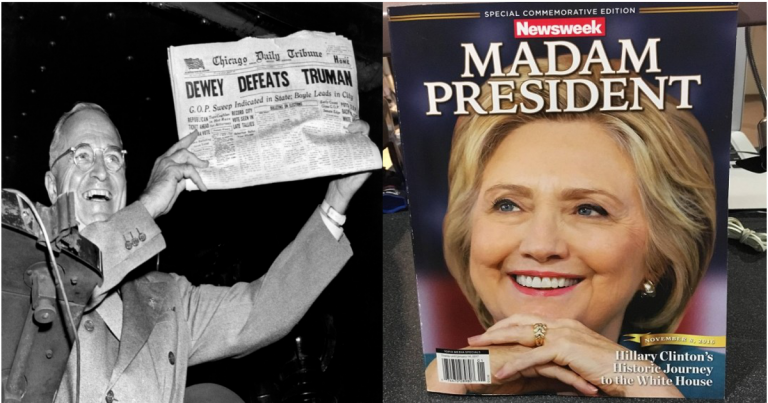 The New York Times‘ statement was not accidental, but pre-planned. We are in the middle of a coup d’etat by election-stealing against both President Trump and our republic, and the “mainstream media” is very much in on the plot.

A first order of business before you read on: the intent of this piece is NOT to imply that it’s over, and that the evildoers will succeed. Rather, it is to reveal the dire fate that will befall our nation (and the world) if they do succeed, and so knowing the stakes, serve to motivate us all to resist the evildoers with every ounce of our strength, and every fiber of our being.

A second order of business: do not fall for the myriad “psyops” to which we are now being subjected. Lies such as:

Moreover, if the evildoers succeed in stealing this election, they’ll just also steal the 2022 mid-terms, and cement their power in Congress. That is, if by then they even need to. They’ve openly admitted to quick mass amnesty for illegal aliens (putting them on a glide path to voting rights), which alone could create a permanent majority of voters whose first loyalty is to the welfare state, rather than to our founding principles and culture.

They fully intend to impose a Socialist “fundamental transformation” of our country. As they pursue their schemes, millions upon millions of Americans will not sheeple-like abide by a stolen election and the imposition of a totalitarian state.

Thus, it may well be that for the second time in our history the Democrat Party will be responsible for starting a civil war in America.

The first time they did it to maintain slavery over a racial subgroup of Americans. This time, it will be to impose equal opportunity slavery upon all Americans – that is, the Satanic evil of Socialism (it will matter little if it is imposed under the banner of “Great Reset” or “Green New Deal” or “Agenda 2030”).

Which brings us to the political realm. Across the globe, government and the politics that shape its course, are perhaps the most powerful forces within our societies.

Therefore, it would be the height of naiveté to believe that Satan, the Great Deceiver, does not target the political realm by working through human beings – both through those who knowingly embrace his evil, and a larger cadre of the unwitting, the useful idiots (e.g., “social justice warriors”).

Thus, Satan’s designs must include controlling and then working through political parties, and here in America we are not exempt: what once was the Democratic Party has morphed into the “Democratic Socialist Party” in all but name.

Accordingly, for the remainder of this article we will employ a more accurate label in order to bear witness to that political party’s root source and true motivations: the “Democrat Satanist Party.”

This writer, and most who will read this, are just regular people – average citizens. Occasionally major historical events intersect with the lives of ordinary people, and tests them. This is such a time.

The dark specter of Satanic Socialism threatens to first envelop our nation, and then consume it. Ronald Reagan warned back in the early 1960’s that if the United States of America succumbs to this evil, there will be no place left to run to. So, the fate of the entire world now rides on the outcome of our current electoral battle.

For some time now the Democrat Satanist Party has been plotting an attempted coup d’etat (see, e.g., the deceptively named “Transition Integrity Project”). The coup now underway. Whether it succeeds or not is up to we, the average citizens of this Divinely-inspired nation – by what we do, or what we fail to do.

What awaits us if they succeed? Likely within a very few years, the geopolitical vacuum left by the “fundamental transformation” of the United States will enable radical Islam to run rampant in the Middle East, northern Africa, and it may well absorb Western Europe into a sphere of influence (part of a caliphate?). The ramifications for Israel’s continued existence are obvious. Meanwhile, Russia may absorb Eastern Europe into its sphere of influence. And Communist China is likely to absorb the rest – the Pacific region first, then India, mid- and southern Africa, maybe even South America.

Here at home, the Democrat Satanists have already (publicly) plotted retribution against those who supported President Trump; and admit to creating lists of targeted people. The newly packed Supreme Court will “hate speech” First Amendment rights into oblivion, and “reinterpret” the Second Amendment into a nullity. And then their Soviet echoing, Maoist “cultural revolution” inspired fun can really begin. Americans will be living under a totalitarian regime.

Whatever the outcome of this Biblical-scale struggle between good and evil, in later years there will be a hindsight – for each of us individually while still alive, and after when we then account to our Maker and receive our eternal judgment. Given the monumental stakes during this historical time, the ultimate fate of our eternal souls may well rest solely upon our decisions, actions and omissions during these coming weeks and months.

Most people, during most periods of history, live their lives in relative normalcy, without being tested in the ways that we now are. There’s nothing wrong with that normal life, when the times are normal.

People living during such “normal” times understandably wonder “what it was like” for their predecessors who lived during critical periods, and perhaps wonder how they would have conducted themselves. Many, perhaps most assume that they would have been strong and noble:

“I would have joined Washington’s forces during our revolutionary war, and stuck it out during that winter Valley Forge!”

“I would have hidden Jews rather than allow them to be captured by the National Socialists’ Gestapo and sent to their deaths in concentration camps.”

But until actually tested, none of us can know for sure just how far we’re willing to go in risking our earthly possessions, much less our earthly existence, in the cause of righteousness and resisting evil.

At the end of this article is a link to a short video compilation – excerpts from three movies – including depictions of average citizens rising to the call, rising to the historical imperative.

Watching such scenes, there is the temptation to reassure ourselves that: “When circumstances dictated, when it mattered, of course I would have stood up to be among the righteous, the warriors.”

So, should we not energize ourselves with the sense of being honored as chosen ones, given the opportunity to make a meaningful stand at a momentous time?

Many will, some won’t. Some already have stood up: President Trump, who ran because he recognized what was happening to this country – and gave up a luxurious and peaceful existence for himself and his family. Lt. General Michael Flynn – the ordeal the evildoers have put him through doesn’t require elaboration here.

But they and the others unnamed who have already answered the Divine call to oppose evil cannot do this alone. Each of us must now decide to stand, or not. You control your own destiny. When hindsight comes, where will you be found to have decided?

At this time, one can make personal decisions – including perhaps out of expedience (or fear) to “accept” that Joe Biden won the election; to make a separate peace with the coup d’etat … and so to acquiesce to the envelopment of the nation by Satanic evil. In other words, at least in a sense, to accept the Mark of the Beast. 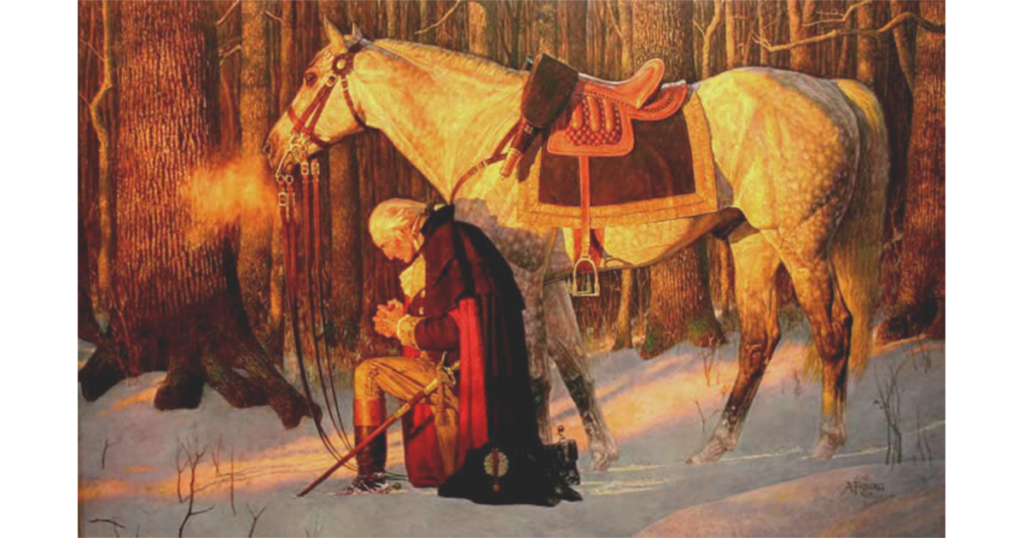 Average citizens joined General Washington in the cause of founding our Divinely-inspired nation. Today, average citizens are needed to help repel a Satanically-inspired threat seeking to end our nation as founded. Choose with whom you will stand.

Or, one can resolve to affirmatively stand with the righteous, even if at great personal risk (at least risk on a secular basis).

It is not an easy decision to make – but what will be said of you to your children and grandchildren and, eventually, to your Maker? What will be the fate of your eternal soul, consigned to its fate by your exercise of free will, for good or ill?

Our cause is righteous, and contrary to what the media would want us to believe, our odds of success great.

We have in our favor the fact that we are the ones pursuing a righteous cause, not a Satanic one.

We have in our favor that the facts on the ground, the legitimate votes, show a landslide win by President Trump.

We have in our favor that in spite of years of “mainstream media” disinformation, millions of our fellow citizens still see reality; and by voting for President Trump have shown more discernment than our misinformed opponents (who will be shocked and disheartened as truth and reality begin puncturing their media-fabricated “reality”).

SO, WHAT MUST WE DO?

Pray. Pray hard. Pray earnestly. We have been blessed to be citizens of a Divinely-inspired nation – an imperfect one, yes – but one worth saving. For our sake, and for the sake of all of humanity.

Then, we must stand behind our President, Donald J. Trump, the duly re-elected President of the United States of America. Not quietly or in our own homes, but publicly and unapologetically.

A good initial step is to donate to President Trump’s legal defense fund (be wary of contributing to fraudulent funds).

We have a symbiotic relationship with our President – with our duly re-elected President – which is as it should be. He is both our representative, and our leader – he draws strength and inspiration from us, and we from him (just look at his pre-election rallies). And together, we draw strength from God – the party of “separation of church and state” can’t say that!

President Trump, with the blows he has taken on our behalf, has more than proved himself to be worthy to be our leader, to receive our admiration and support. Will we now prove to be worthy of him? Stand up now!

Also, we must help communicate truth, especially now that Fox News has shown itself to be allied with the DS’s (Deep State; Democratic Socialists; Democratic Satanists). We can bypass the censorship of social media using face-to-face conversations, and email (consider forming email trees, something like the old phone trees).

Spread news that is not reported by the so-called mainstream media; spread it far and wide. Read, and then “email tree” pertinent stories from “our” alternative media, such as (in alphabetical order): Blaze TV; Breitbart; Epoch Times; Gateway Pundit; Newsmax; One America News; Real America’s Voice and Revolver.