On Wednesday, Salvatore Schachter, the stepfather of Ava Martinez, the adorable 8-year-old girl whose videos mocking Democrat Socialist Alexandria Ocasio-Cortez, earned her the nickname “MiniAOC,” announced that all social media accounts for the youngster have been deleted due to harassment and death threats from unhinged, insane leftists.

“Ava will not being doing any more MINI AOC content,” he said on Twitter.  “The Left’s Harassment and death threats have gone too far for our family. We have been getting calls on our personal phone numbers. For our safety and for our child’s safety, we deleted all Mini AOC accounts.”

Ava will not being doing any more MINI AOC content.

The Left's Harassment and death threats have gone too far for our family. We have been getting calls on our personal phone numbers.
For our safety and for our child's safety, we deleted all Mini AOC accounts.

“We had to delete our accounts because the threats, harassment, negativity and hate directed at Ava and our family grew too much to bear,” Schachter told The Gateway Pundit. “The calls, texts, posts and emails from angry, hate-filled people were quite frankly, disturbing.”

“We started Mini AOC because Ava is a natural performer who loves to entertain and she enjoyed the praise she was getting for her sense of humor and charming personality,” he said. “It’s with some sadness that she will not get to share her talent with the many people who enjoyed her videos because of others who use violence as a means to an end. I do find it odd that people feel the need to protect a congressperson with such hate and disgust.”

This sucks. So sorry is happening. Thanks for brightening our day for the brief time Mini AOC was out there.

Gonna miss the hilarity of #MINIAOC. Sad to see that the "peaceful, loving, tolerant left" are the most violently intolerant people on planet earth, and that any speech they don't like is apparently worthy of doxing and death threats.

Indeed.  As this writer has repeatedly opined since February 2011, liberalism, at its core, is an ideology of insane bloodthirsty rage and hate.  And yes, they have no problem advocating the murder of an eight-year-old girl.

This is the modern left — and they really do hate you.  Let that sink in.

Left-wing arsonists are setting many of the wildfires in Western states… but why? 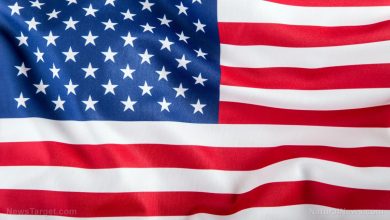 Millions of moral, patriotic Americans are turning off the NFL, NBA, Netflix and Hollywood

I Stand Behind The Heroes The Protect This Line Unisex Mask