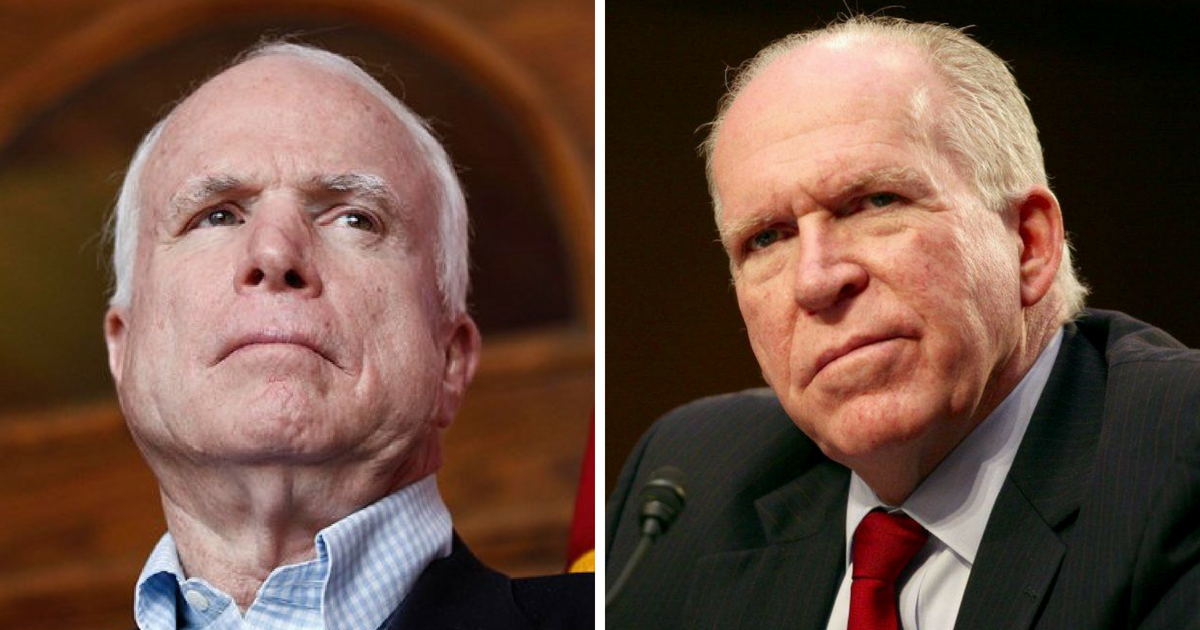 Somehow, these two traitors belong together, if you ask me. Following President Trump’s meeting with Russian President Vladimir Putin, Senator John “Songbird” McCain (R-AZ) released a statement saying that President Trump’s remarks during the press conference as “pathetic,” disgraceful,” and “painful” to observe and “a recent low point in the history of the American Presidency” while former CIA director John Brennan called on “patriot” Republicans to impeach Trump.

Now, anything above the eight years of the usurper, Barack Hussein Obama Soetoro Sobarkah, is actually a high point, but coming from the mouth of McCain, we shouldn’t expect anything less. Every time that man speaks or votes now is pathetic, disgraceful, painful and a low point in the US Senate.

Still, the aging McCain issues a statement after Trump’s comments at a press conference in Helsinki, Finland on Monday with Putin.

“Today’s press conference in Helsinki was one of the most disgraceful performances by an American president in memory. The damage inflicted by President Trump’s naiveté, egotism, false equivalence, and sympathy for autocrats is difficult to calculate. But it is clear that the summit in Helsinki was a tragic mistake,” McCain wrote. “President Trump proved not only unable, but unwilling to stand up to Putin. He and Putin seemed to be speaking from the same script as the president made a conscious choice to defend a tyrant against the fair questions of a free press, and to grant Putin an uncontested platform to spew propaganda and lies to the world.”

“It is tempting to describe the press conference as a pathetic rout – as an illustration of the perils of under-preparation and inexperience. But these were not the errant tweets of a novice politician,” he added. “These were the deliberate choices of a president who seems determined to realize his delusions of a warm relationship with Putin’s regime without any regard for the true nature of his rule, his violent disregard for the sovereignty of his neighbors, his complicity in the slaughter of the Syrian people, his violation of international treaties, and his assault on democratic institutions throughout the world.”

While McCain blasted Trump for not standing up to Putin and defending a tyrant, allowing him to “spew propaganda and lies to the world” after having ripped into NATO countries for doing business with Russia, he failed to see the irony of his own efforts in creating the Islamic State and partnering with Islamic jihadis that murdered thousands of people in the Middle East.

“Coming close on the heels of President Trump’s bombastic and erratic conduct towards our closest friends and allies in Brussels and Britain, today’s press conference marks a recent low point in the history of the American Presidency,” McCain’s statement continued. “That the president was attended in Helsinki by a team of competent and patriotic advisors makes his blunders and capitulations all the more painful and inexplicable.”

Sen. John McCain: "Today’s press conference in Helsinki was one of the most disgraceful performances by an American president in memory." https://t.co/GaBU70wMyX pic.twitter.com/4p3EKSvMaD

McCain then jumped the shark by blasting Trump for not upholding American values abroad, almost seemingly ignorant of the usurper’s eight years in office, which he praised for the most part.

“No prior president has ever abased himself more abjectly before a tyrant,” McCain concluded. “Not only did President Trump fail to speak the truth about an adversary; but speaking for America to the world, our president failed to defend all that makes us who we are—a republic of free people dedicated to the cause of liberty at home and abroad. American presidents must be the champions of that cause if it is to succeed. Americans are waiting and hoping for President Trump to embrace that sacred responsibility. One can only hope they are not waiting totally in vain.”

No prior president, Songbird? What about this guy?

Was the Marxist-in-chief presenting your version of “American values,” Senator McCain?

I think he was, but nevermind that.

McCain was one of many who were upset over the press conference. Another was Obama’s former CIA director, John Brennan.

He doesn’t demonstrate exactly how Trumps’ “performance” exceeded the threshold of high crimes and misdemeanors. He just expects that people will latch onto it, but he didn’t stop there.

“It was nothing short of treasonous,” added Brennan, who worked for what could be argued was the most treasonous person to sit in the Oval Office. “Not only were Trump’s comments imbecilic, he is wholly in the pocket of Putin. Republican Patriots: Where are you???”

Trump is in the pocket of Putin? Whose pocket was this guy in?

Remember, Putin and Trump both questioned the FBI’s handling of the investigation into Hillary Clinton’s illegal email server. I think Brennan was just trying to get the spotlight off of Clinton because inevitably it would come back on him.

Brennan then appeared on MSNBC and called for Trump officials to resign.

“I cannot understand how the national security team can continue to abide by this and how Pompeo and Bolton and Kelly can continue in their jobs,” he said. “This, I think, rises to the point of good American patriots resigning in objection to that performance by Donald Trump.”

Brennan wouldn’t know a patriot if one walked up to him and pinned the Constitution on him and planted a Bible in his hand. He’s as unconstitutional as they come and a stooge for Islam.