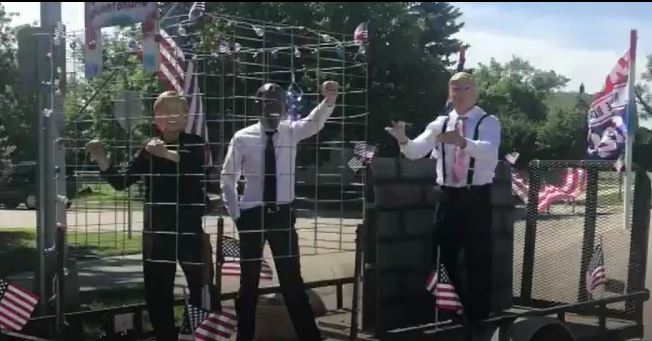 Some folks in South Dakota, have their panties all twisted in a wad because of a parade float featuring two people wearing Obama and Hillary masks inside a cage, and the word “Guantanamo” spray-painted on a sign above.

Another man wearing a President Trump mask stood outside the cage next to a makeshift wall with the words “Build the Wall.” The trailer was ringed with numerous American flags, and featured Trump Make America Great Again flags flying from the rear gate.

Jeff Damer, the creator of the float, said that although “I had to think about it with the mask of Obama, coming out as racist, I just wanted to put it out there, it was just my view that I feel that they should be charged, Barack Obama and Hillary Clinton.”

Not surprisingly, float has stirred up a lot of talk on social media.

South Dakota blogger Kevin Woster finds the float very offensive and “objectionable”. He and Damer spoke about the float and its intended message, and are pleased they have been able to find some common ground.

Damer said Woster “was civil the whole time, he tried to moderate his page, cussing, insults, this and that, he deleted a bunch of some really hateful things.” For his part, Woster said the two men have “stayed in contact, and I think we got to talking pretty good, and I think we’re making some progress.”

Highmore Mayor Vikki Day says city officials have received a lot of messages from people who think she shouldn’t have allowed the float, but “My stance, and the city’s stance is that every person has a right to the first amendment, to express his or her speech, and the expressions of it, we do not regulate that.”

Jeff Damer told KSFY that his biggest regret is shedding a bad light on the town that he loves.

Victor Skinner of The American Mirror points out this isn’t the first time that “liberal” politicians are lampooned in hometown parades. In 2016, for example: