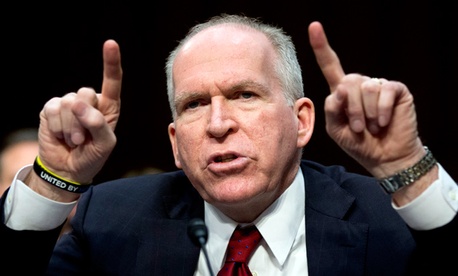 Opinion| It appears that special prosecutor John Durham is now circling his target.

As you read on, keep in mind that the ICA is prepared for the president’s eyes only. In its purest form the ICA is a measured assessment of the total intelligence gathered by 17 different agencies. No one except those preparing it and the president are to see it.

According to a report in the New York Times, Durham has turned his attention to the December 29th, 2016, Joint Analysis Report (JAR) on Russia Cyber Activity and the January 7th, 2017, Intelligence Community Assessment(ICA) that was derived from the JAR:

(New York Times) […] Mr. Barr wants to know more about the C.I.A. sources who helped inform its understanding of the details of the Russian interference campaign, an official has said. He also wants to better understand the intelligence that flowed from the C.I.A. to the F.B.I. in the summer of 2016.

During the final weeks of the Obama administration, the intelligence community released a declassified assessmentthat concluded that Mr. Putin ordered an influence campaign that “aspired to help” Mr. Trump’s electoral chances by damaging Mrs. Clinton’s. The C.I.A. and the F.B.I. reported they had high confidence in the conclusion. The National Security Agency, which conducts electronic surveillance, had a moderate degree of confidence. (more)

It was all based on the false premise that Russia hacked the DNC server. Without that foundational piece, the entire collusion narrative collapses. Follow the bouncing ball:

Very early on, the DOJ admitted that the FBI never conducted a forensic analysis of the hacked DNC server. It was always hard to fathom why unless it was because they didn’t want the answer.

The fact that every investigative effort flowed from the premise of Russian involvement, and that no effort was ever made by the FBI to independently prove (or disprove) that important justification, and that it was then used to target the POTUS, makes that dereliction by the FBI unfathomable.

This week, because of a defensive court filing by Roger Stone, we just became aware that the FBI was never even given access to the completed report of the private contractor (Crowdstrike) that claimed to perform the forensic evaluation.

Crowdstrike was hired by the DNC.

Crowdstrike’s co-founder is Dmitri Alperovitch with ties to the Clinton Foundation.

More than fishy? Where was the investigation into that? This is why Attorney General William Barr said, the more he uncovers the more questions he has.

According to the ICA, Brennan and former Director of National Intelligence James Clapper’s concluded, with ‘a high-degree of confidence’, that Russia was attempting to help Donald Trump and were damaging Hillary Clinton to accomplish that.

For anyone with knowledge of geopolitical history, that conclusion always defied logic.

If the report in the Times is accurate, Durham is about to uncover evidence that the Dec. 29, 2016 JAR on Russia Cyber Activity was a political hit job that conflated unassociated Russian cyber activities, that might’ve been occurring at the time, with the hacking of the DNC server.

The ICA that was written 9 days later, that relied on the conflated conclusions in the JAR, was written with deliberate intent to justify the future intelligence community assault on Donald Trump.

Consider that every investigative action from that point forward was targeted to prove that Donald Trump was tied to Russia, to such an extent that all evidence that was uncovered against Hillary Clinton, or her associates, was ignored.

The investigations – the FBI, DOJ, and the special counsel – that followed were so narrow in scope that their myopic intent to prove the ICA (as well as the steele dossier) to be true, raises questions by itself.

All of this suggests that Durham is now honing in on the critical evidence that would prove former CIA Director John Brennan, former FBI Director James Comey, and former Director of National Intelligence James Clapper conspired to create a false construct that Donald Trump colluded with Russia.

It’s expected that Durham will soon discover that the ICA served as a conduit to update then-President Obama about corrupt actions the intelligence community was engaged in while keeping that information hidden from oversight by other governmental entities.

And, that Obama knew everything.

Read the ICA of December 29, 2016 and then decide for yourself if it’s even worthy of being labeled nonsense:

Unclassified version of int… by on Scribd