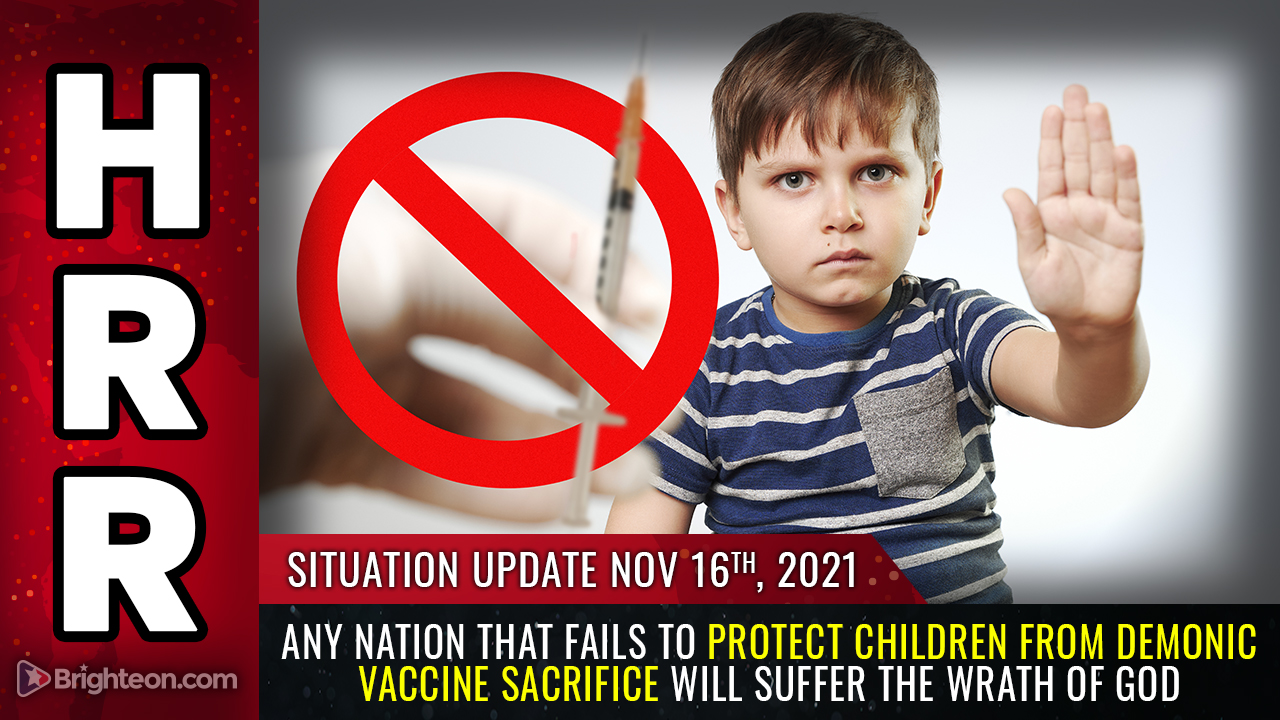 (Natural News) In today’s Situation Update podcast (below), I share passages from the Old Testament that are highly relevant today when it comes to protecting children against being sacrificed to Satan.

In Leviticus, God explains (through Moses) that not only is child sacrifice sinful and evil, but that communities have an obligation to stop parents who are sacrificing their children to Moloch (“Molek”).

Societies that fail to stop the practice of child sacrifice face the wrath of God. Here’s Leviticus 20:2-5 (emphasis added)

As you can see, God calls for harsh punishment for parents who sacrifice their own children. In Exodus, God also shows that he is willing to unleash plagues upon entire nations that fail to follow his teachings. His plagues become increasingly severe as his warnings are ignored. In Exodus, God commanded the Pharaoh to set free the Israelites, and the Pharaoh refused until the tenth plague finally changed his mind.

Notably, at least two of these plagues are biological weapons attacks (livestock disease and the plague of the boils). Other plagues unleashed by God against Egypt include locusts, flies, gnats, frogs and finally, the mass death of all first-born sons.

Covid vaccines contain instructions for the body to manufacture spike protein nanoparticles. Those toxic nanoparticles attack the body from the inside and even damage the DNA repair mechanism found in the nuclei of human cells. Accordingly, covid vaccines are a biological weapon being used to destroy human lives.

When they are injected into children with the permission of their parents, those parents are sacrificing their children and condemning them to death. God has already chimed in on his disdain for those parents who sacrifice their own children, and if the modern world does not stop this medical violence being committed against children, it’s quite clear that God will unleash his wrath against the nations of our world.

What will that wrath look like? The Bible is filled with numerous examples: Plagues, earthquakes, pestilence, economic collapse, war and mass human suffering. Nations that turn away from God are heading directly down the path of total destruction, and the only solution that spares those nation is a return to God’s teachings and for adults to start protecting children. (America is currently lead by a fake president who is a child-sniffing pervert. Ponder the spiritual implications of that…)

The mass vaccination of children with spike protein injections has no scientific or medical justification whatsoever and seems engineered to enrich Big Pharma while mass murdering young human beings. As the children of the world die from myocarditis, heart attacks, immunological disorders and even cancers over the next few years, it’s going to become apparent that humanity was engaged in a planetary scale mass child sacrifice ritual to Moloch, spurred on by demon-infested anti-humanists like Fauci.

Any parent sacrificing their child to Moloch is rejecting God and securing their position in Hell for eternity. It’s not going to be a pretty experience for them.

Those of us who understand the fundamentals of God’s teachings must now peacefully work to stop the mass sacrifice of our children and prove to God that we are defending the innocent by halting child sacrifice via “vaccines.”

If we fail to stop this spiritual atrocity, we will all be judged (harshly) by God himself.