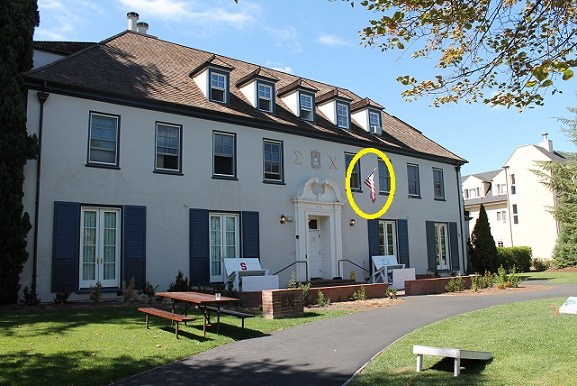 The next time we find ourselves despairing about the future of America, remember the young people of Sigma Chi and the Stanford Review.

The Stanford Review is an independent newspaper staffed completely by Stanford University undergraduates. It describes itself as “a political magazine that promotes independent thought at Stanford. We aim to promote debate about campus and national issues that are otherwise not represented by traditional publications.”

Stanford Review‘s executive director Antigone Xenopoulos reports on Nov. 28, 2018, that the Sigma Chi fraternity was on probation last year. So the fraternity tried to improve its image with the university so that the probation would be lifted and the fraternity be allowed to continue.

According to senior Pablo Lozano, class of 2018, as well as other students who asked not to be named, a Stanford University administrator “encouraged” Sigma Chi to take down the American flag flown in front of its house in order to improve its image on campus.

The administrative – let’s call him Mr. Z – was assigned to serve as a liaison between Residential Education and Sigma Chi. At first, Mr. Z was supportive and helpful, explaining to the fraternity often obscure bureaucratic processes.

But his demeanor changed one night in Autumn 2017.

The fraternity had invited Mr. Z to dinner, during which he “offhandedly suggested” that the American flag flown in front of the Sigma Chi house be removed.

Mr. Z urged Sigma Chi to consider the image being presented to the rest of campus by flying the flag out front. Lozano understood the administrator to imply that the American flag was intimidating, aggressive or alienating, and made others uncomfortable, and that Mr. Z found the mere sight of the American flag to be offensive.

Lozano recounted that the more the house talked about Mr. Z’s suggestion, the more it bothered them. Many found his proposal to take down the flag “weird”. The remark was out of the blue and incongruent with the rapport the fraternity had shared with Mr. Z. Furthermore, the fraternity wondered since when is an American flag flown at an institution in the United States offensive?

In fact, American flags adorned buildings near Sigma Chi and on campus, including:

Furthermore, Lozano noted that Mr. Z raised no objections to the Dominican flag flown by a student from his bedroom window in Sigma Chi or to the Palestinian flag hung across the street at Columbae.

To Sigma Chi’s credit, the fraternity not only declined to remove the American flag from its house, they replaced it with an even bigger one — from a 3×5 ft. flag to a 4×6 ft. flag. The former flag was then framed and placed on display inside the house. In Lozano’s words, Sigma Chi’s decision was a “silent but visible protest” against the classification of the American flag as a potentially stigmatizing symbol by a member of the Stanford administration.

Sigma Chi is gone. The fraternity was shut down last May and no longer exists at Stanford University. (Breitbart)

This series of events, known to few, is concerning on multiple levels. One can imagine a justification for opposing a foreign flag being flown on one’s own soil, though I believe that such a condemnation would be ultra-nationalist and antagonistic. One could also reasonably consider the display of an authoritarian regime’s flag to be insulting and hostile – be it a flag representing Nazi Germany, The Confederacy, or Apartheid South Africa. One can likewise anticipate the classification of a sectarian flag as illegal – be it that of Catalonian or Chechen separatists. However, there is no reason why hoisting the American flag, on American soil, at an American institution, is offensive.

Every individual – American or not – has a right to take issue with any and all policies and actions that the U.S. government takes. I am not discouraging criticism of, protest against, or opposition to U.S. government policies. In fact, I encourage such scrutiny. To classify the American flag on American soil as offensive or jingoistic, however, is an entirely separate phenomenon which implies the condemnation of the United States at large.

There is an evident aversion amongst private institutions in the Bay Area to affiliate or partner with the American government. Be it Google employees protesting collaboration with the military on AI development, the absence of the national anthem at Stanford’s 2018 graduation ceremony, the elimination of the American flag from student organization logos, or Stanford’s framing itself as a global rather than American institution, the pattern is clear. Affiliation or partnership with the U.S. government is neither popular nor sexy. Patriotism in the Bay [San Francisco Bay Area] is not praised; indeed, at this rate of pariah-hood, it may soon perish.