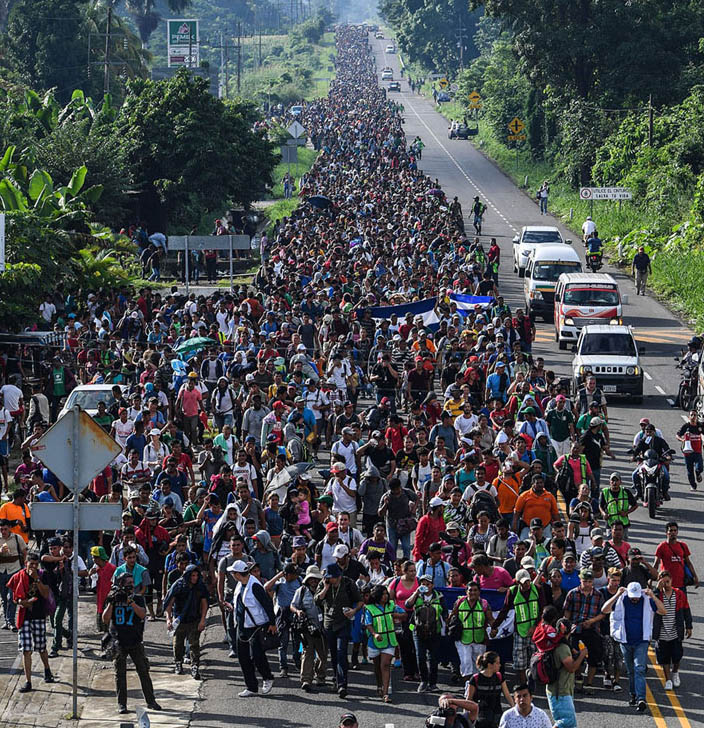 There—I said it. Call me a heartless fear-mongering racist. I don’t care any longer! It’s beyond time to state the obvious. Starve them out–ALL of them!

This wall embroglio has been nothing but kabuki theater; it has become an empty symbol for what should be going on to solve our immigration crisis.

As we celebrate a few more miles of wall, cheap-labor lobbyists and politicians of both stripes are laughing at us. Where will this project be in six years–in ten? If we don’t remove the incentives, the invaders will still find a way in.

Either we are a sovereign nation, or we aren’t

There is no middle-ground on national sovereignty any more than there’s a middle ground on rape or murder, yet we see these criminal invaders sheltered by cities and states as if “their” crimes fall into a special category. Why should we let ANYONE stay after they have proven themselves to be criminals or irresponsible members of society. Let’s have ZERO TOLERANCE where immigrants are concerned. You want to stay here–then EARN the right.

“Open-borders” is an oxymoron

Current candidates seeking the Democrat nomination for president pander to the open-borders crowd. Either you have a border, or you don’t. If the goal is to keep the border open, then you no longer have one. Simple, right, but they don’t like the way “NO BORDERS’ might sound to the electorate.

If you follow the logic of the cheap labor proponents (both Dems and Repubs), NO American wants to work doing anything, therefore we need to sideline the hometown folks and bring in more invaders to do those jobs.

I remember visiting Washington state in 2006 and marveling at the fact that Anglos were operating machinery on road construction crews. In Texas it was rare to see anyone, not Latino, employed in those upper wage highway jobs. Democrat Washington Governor Christine Gregoire had taken office the previous year (2005) and publicly lamented the fact that her state didn’t have very many Mexican “immigrants” available to work. This was a time when the tree huggers in Olympia had put thousands of loggers out of work.

Take a look around now and see who is working in construction and the building trades, and how much Washington taxpayers are spending on this population, subsidizing business owners who are benefitting from cheaper labor.

President Trump says the US loses 200 billion dollars on illegal immigrants each year–I say it is a LOT more.

Although this number seems to jump around depending on which government entity estimates it, the American taxpayer is spending billions to support people who are here to take their jobs. Add to this number the 138 billion annually that immigrants are sending back to their own countries in the form of remittances, and you see the true economic impact on the US. How do remittances help other US businesses or our economy? Immigrants can squirrel away this money because the citizen taxpayer is subsidizing their individual and family living expenses.

What to do—what to do?

STARVE them out by levying confiscatory fines on businesses that hire them. Take away ALL welfare benefits. Reverse the automatic citizenship of “anchor babies” born to foreign parents. Stop family-based immigration chains for those who are here legally.

Even if President Trump manages to get a wall constructed, the next time a Democrat is in office it will either be torn down, or they will refuse to provide the border staff to monitor it. A wall won’t get rid of these invaders or the billions we spend supporting them, it only works in one direction, if at all.

Tear it down and they will leave

In a reverse twist on “Field of dreams,” take down the system which has become a magnet for illegal immigration. Keep pressure on any businesses that might be tempted to hire illegals. Impose strict limits on work visas, including the caveat that any money sent out of the country will be taxed at 20 percent. They will deport themselves.

I support President Trump, but many have come to realize that the wall is just a distraction from the real solutions right in front of Congress, government enforcement agencies, and the President. Demand REAL action on our immigration system.

Have your own ideas? Put them in the comment section and don’t forget to visit our home page for more articles: DCDirtylaundry