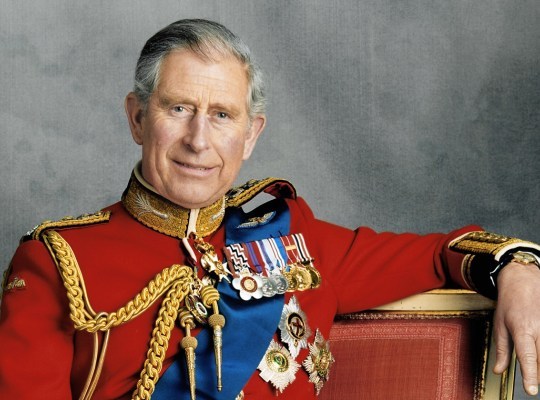 The term “stolen valor” refers to military imposters — individuals who lie about their military service.

In the United States, the Stolen Valor Act of 2013 makes it a crime for a person to fraudulently claim military service or military awards and medals specified in the Act, with the intention of obtaining money, property, or other tangible benefit. The awards include the Medal of Honor, Distinguished Service Cross, Silver Star, Purple Heart, Combat Action Ribbon or Medal, and more.

If Prince Charles, 69, were an American, he would be arrested for stolen valor — pretending to military service, ranks and awards that he had not earned.

According to Wikipedia, this is Prince Charles’ military service:

Altogether, Prince Charles served in two branches of the UK military: the Royal Air Force and Royal Navy. His entire military service lasted just five years, from 1971 to 1976. The highest rank he attained was Captain of the coastal mine-sweeper HMS Bronington. He never saw war and never served in combat.

And yet, as you can see in his pic above, the future king of the United Kingdom and the Commonwealth realms (including Canada, Australia and New Zealand), sports a chestful of distinguished and combat medals on his military uniform, including:

In a blistering article on October 15, 2018, the National Enquirer quotes an unnamed “insider”:

“Charles is making a mockery of every soldier, sailor and airman who did go into battle for their country, many of whom paid the ultimate price with their lives. His own father, Prince Philip, served in World War II and his brother, Prince Andrew, saw combat in the Falklands War. But Charles is a joke. He’s nothing but a clown prince. He should be ashamed of himself chatting to real veterans while he steals their valor with fake medals.

But the truth is he was promoted to those [five-star] ranks by his mother, Queen Elizabeth, in 2012. She previously elevated to four-star ranks for his 58th birthday in 2006. Clearly, Mommy had to give him lots of medals because he never won any. He’s a pathetic imposter.”