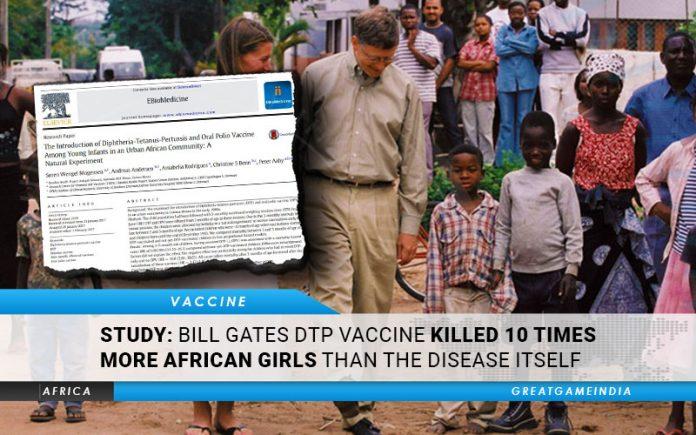 Once again, Bill Gates and his devilish ideas are being exposed for the havoc he has brought about in Africa. The latest is a study that discovers his DTP vaccine killed 10 times more African girls than the disease itself! Yet, he wants to vaccinate you? You gotta be a special kind of stupid to take any vaccine, but especially one that has Bill Gates tied to it.

Great Game India has the story on the study.

According to a peer reviewed study published in a respected journal by the world’s most authoritative vaccine scientists, Bill Gates DTP vaccine killed 10 times more African girls than the disease itself. The vaccine apparently compromised their immune systems. Although, such study was never performed before 2017, Bill Gates and the Vaccine Alliance GAVI and WHO pushed the vaccines on unsuspecting African babies.

The study (read below) titled, The Introduction of Diphtheria-Tetanus-Pertussis and Oral Polio Vaccine Among Young Infants in an Urban African Community: A Natural Experiment was commissioned by the Danish government and Novo Nordisk Foundation and was conducted by a team of the world’s leading experts on African vaccination led by two most prominent names, Drs. Søren Wengel Mogensen and Peter Aaby.

The DTP vaccine is a class of combination vaccines against three infectious diseases in humans: diphtheria, pertussis (whooping cough), and tetanus.

Until the study was published in 2017, the WHO (World Health Organisation) never conducted the kind of vaccinated/unvaccinated (or placebo) study necessary to ascertain if the DTP vaccine actually yields beneficial health outcomes.

Yet, Bill Gates and his Vaccine Alliance GAVI and WHO pushed the untested vaccines on African babies.

The scientists conducting the study were shocked when they found that 50% of children in the African nation of Guinea Bissau die before the age of five.

While the vaccinated children were protected from Diphtheria, Tetanus and Pertussis, they were far more susceptible to other deadly diseases than unvaccinated peers. The vaccine apparently compromised their immune systems.

DTP was associated with 5-fold higher mortality than being unvaccinated. No prospective study has shown beneficial survival effects of DTP. Unfortunately, DTP is the most widely used vaccine, and the proportion who receives DTP3 is used globally as an indicator of the performance of national vaccination programs.

It should be of concern that the effect of routine vaccinations on allcause mortality was not tested in randomized trials. All currently available evidence suggests that DTP vaccine may kill more children from other causes than it saves from diphtheria, tetanus or pertussis. Though a vaccine protects children against the target disease it may simultaneously increase susceptibility to unrelated infections.

Bill Gates funded and British led GAVI (Global Alliance for Vaccines and Immunisation) has created a system called “Performance based funding” whereby they financially punish nations based on their compliance or non-compliance to vaccination programs.

On the other hand we learned last year based on an intercepted human intelligence report that Bill Gates offered $10 million bribe for a forced vaccination program for Coronavirus to the Nigerian House of Representatives.

Indians should beware that the British led GAVI has managed to infiltrate India’s healthcare policy-making thereby gaining a strategic position to dictate India’s response to coronavirus.

While the UK is GAVI’s largest funder, its implementation follows what is known as the” Gates approach”. Known as the Vaccine Cartel or Pharma Cartel by critics, its vaccines have been accused of causing atleast 38 million premature deaths worldwide.

Even the so called “Swadeshi” Indian COVID-19 vaccine COVAXIN maker Bharat Biotech was backed since its inception by Bill Gates and the international pharma lobby.

Bill Gates agenda in India and his “obsession with vaccines” was exposed last year in a lengthy piece by Robert F. Kennedy Jr., the nephew of former American President John F. Kennedy.

Tim Brown is an author and Editor at FreedomOutpost.com, SonsOfLibertyMedia.com, GunsInTheNews.com and TheWashingtonStandard.com. He is husband to his “more precious than rubies” wife, father of 10 “mighty arrows”, jack of all trades, Christian and lover of liberty. He resides in the U.S. occupied Great State of South Carolina. . Follow Tim on Twitter. Also check him out on Gab, Minds, MeWe, Spreely, Mumbl It and Steemit
(Visited 25 times, 1 visits today)
Share
Tweet
Share
Pin