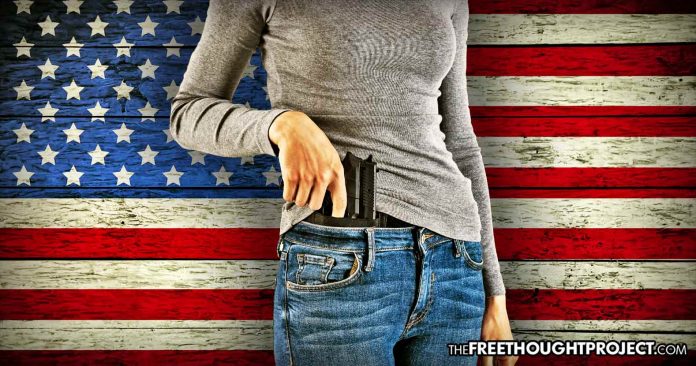 Despite massive gun restrictions rolling out across the country, for the past two years, the number of concealed carry permit holders has continued to soar. A study conducted at the end of last year showed that the number of Americans licensed to carry a concealed weapon is now over 17 million—a whopping 273 percent increase since 2007.

If we were to believe the rhetoric that more people carrying guns would lead to more crime, there would be a correlation showing an increase in crime among concealed carry holders. However, a study conducted by the Crime Prevention and Research Center, which examined these numbers, found the opposite.

What’s more, not only are concealed carry permits not committing the crimes the anti-gun crowd would like us to believe, but the study found cops are far more likely to commit crimes than permit holders.

According to the study, “permit holders are convicted of misdemeanors and felonies at less than a sixth of the rate for police officers.”

“With about 685,464 full-time police officers in the U.S. from 2005 to 2007, we find that there were about 103 crimes per hundred thousand officers,” CPRC President John R. Lott Jr. calculates, which he noted is admittedly low due to under-reporting. “For the U.S. population as a whole, the crime rate was 37 times higher—3,813 crimes per hundred thousand people,” he noted.

However, these “crimes” for average citizens are things that police officers will not arrest each other over and often times can get away with. Moreover, as we have shown, police officers have a far greater rate of domestic violence and sexual misconduct than the average population.

But looking at the sample of concealed permit carriers, their crime rate dwarfs that of police. “Between October 1, 1987 and June 30 2017, Florida revoked 11,189 concealed handgun permits for misdemeanors or felonies,” according to the report. “This is an annual revocation rate of 10.4 permits per 100,000.”

Another stereotype-shattering number the study found was that these concealed carry holders aren’t just white conservative males “clinging to their guns.” In fact, the numbers show that women and minorities lead the pack when obtaining permits, by a long shot.

Sadly, these innocent, law-abiding concealed carry holders who have dark skin are not safe from police who fear guns. As TFTP reported at length, Philando Castile lost his life for legally conceal carrying a gun. He is joined in his death by Jemel Roberson and EJ Bradford who both stopped mass shootings with their legal guns late last year only to be gunned down by police who showed up after.

It is also important to remember that there are now 14 states who do not require citizens to acquire concealed carry permits to carry. Because of these constitutional carry states, the number of those carrying concealed is likely higher. By contrast, when we observe areas with stricter gun laws, like Chicago, their crime rates move in the other direction.

Given these numbers, the idea that stricter gun laws will prevent crime becomes sheer insanity. Yet still, politicians from across the country are creating and passing legislation on a massive scale.

Unless you’ve been under a rock lately, then you’ve likely seen the unprecedented push by all levels of government to separate law abiding Americans from their guns. No, this is not some conspiracy theory either, as TFTP reported this week that there have been thousands of guns confiscated from law abiding citizens under these new red flag laws in just the last year.

The president himself ushered in a new level of gun control last year doing what his liberal predecessor even refused to do by banning bump stocks.

However, the good news is that as states across the country seek to limit the ability of innocent people to defend themselves, people are disobeying. Indeed, as we’ve noted time and again, rights are preserved and gained when good people make a stand and refuse to obey bad laws.