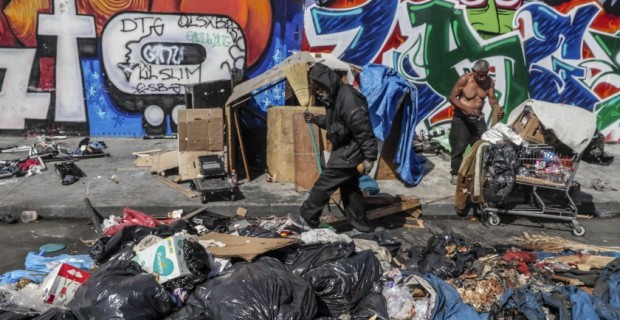 With typhoid fever and even the return of the bubonic plague already big concerns, increasing homelessness in Los Angeles could also spark an increase in leprosy.

According to a new study, more leprosy cases are starting to emerge in Los Angeles County, with Dr. Maria Teresa Ochoa of the University of Southern California urging the public to “fight the stigma.”

Leprosy, which is spread through the air but must involve close contact, can cause permanent blindness, severe damage to the body’s skin, nerves, and mucous membranes, as well as deformities.

Although victims can make full recoveries if they receive early diagnoses, most of Los Angeles’ homeless population who are at risk will not get swift treatment.

“As leprosy has been a neglected disease with a high potential to cause deformities, especially when it is not treated properly, I would like to reinforce the need for early identification of cases in the community with the adoption of active case search and screening of household and social contacts from all index cases,” Dr. Victor S. Santos told Reuters.

“We have a complete breakdown of the basic needs of civilization in Los Angeles right now,” said Pinsky.

1.5 per cent of rats in L.A. now carry bubonic plague. If that figures hits 2 per cent, the medieval disease will start jumping to humans.

In other words, if LA doesn’t sort out its trash problem and its homeless problem, the return of bubonic plague is virtually guaranteed.

As we document in the video below, L.A.’s 60,000 homeless population, vast amounts of uncollected trash and 12 million rats have all combined to make the city increasingly resemble a third world hellscape.