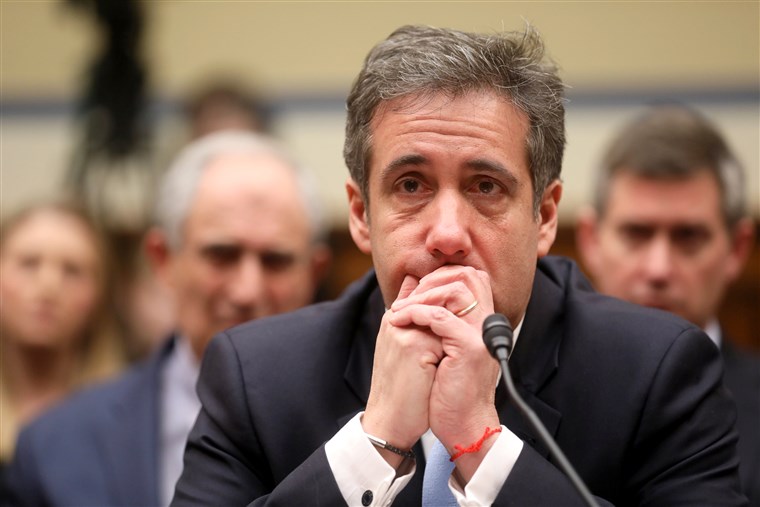 Michael Cohen, 52, is President Trump’s former lawyer (2006 to May 2018), a former vice-president of the Trump Organization, and a former deputy finance chairman of the Republican National Committee (2017-2018).

Cohen is a convicted criminal: On August 21, 2018, he pleaded guilty to eight counts of campaign finance violations, tax fraud, and bank fraud. Cohen was disbarred, sentenced to three years in prison and ordered to pay a $50,000 fine. He is scheduled to report to prison on May 6, 2019.

Cohen is greatly enriched from his association with Trump. He purchased several homes in Trump’s buildings, and is described by the New York Times as known for having “a penchant for luxury” — he was married at the luxury hotel, The Pierre, drove a Porsche while attending college, and once owned a Bentley.

Yesterday, testifying before the House Oversight Committee, Cohen threw his former patron under the bus, calling President Trump a racist, con man, and cheat. (Read his prepared statement to the committee here.)

The New York Post reports that during a contentious exchange with Rep. Virginia Foxx (R-NC), Cohen admitted to having received multiple offers for TV, movie and book deals, and refused to pledge he wouldn’t seek to exploit his infamy.

Rep. Foxx asked Cohen: “​​So you don’t commit to changing your ways, basically, because you want to continue to use your background as a liar, a cheater, a convicted liar, to make money. That’s what you want to do?”

Cohen replied: “And that’s going to get me a book deal and a movie deal and a spot on television? I don’t think so.”

When asked point-blank by Rep. Carol Miller (R-WVa) whether he would “pursue another book deal about your experiences,” Cohen answered, “Yes.”

Cohen also said that “I have been contacted by many, including for television, a movie,” and sarcastically suggested he could make casting suggestions. He said to Rep. Mark Green (R-TN): “If you want to tell me who you would like to play you, I’m more than happy to write the name down.”

“They started with a fake dossier to get an FBI investigation going and now they’re starting with a fake witness to get the impeachment going…. The real story is what he [Michael Cohen] didn’t say today. This is the best they got. This is their star witness. A guy who lied on his bank loans, a guy who lied five times to the IRS, lied to Congress.”