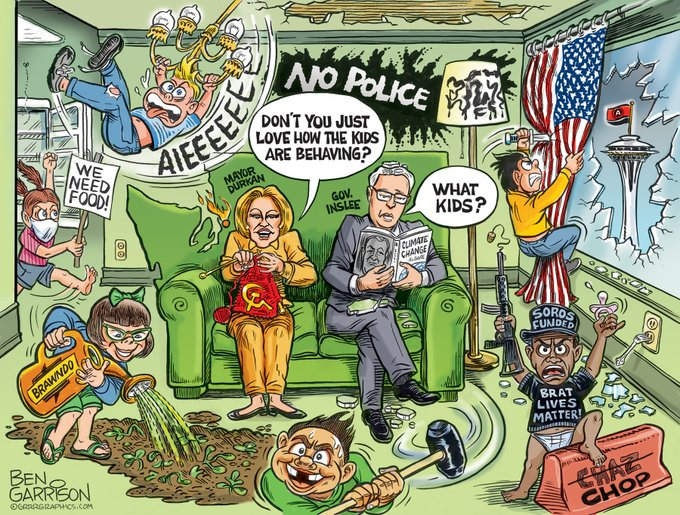 This article first appeared at Fellowship of the Minds

In response to the shootings at CHAZ/CHOP, Washington state Gov. Jay Inslee tweeted the following:

“We are going to take a hard look at how we manage independent investigations of police use of force in WA. Our new task force will recommend actions we can take to create a more just WA. It includes community leaders, impacted family members and law enforcement representatives.”

In this Twitter thread he lists all the members of the task force. This includes Livio De La Cruz – board member, Black Lives Matter SEA-KC.

Yes, Livio is going to study law. Which should make you very nervous considering this tweet by he/him on June 22:

There’s A LOT of presumptive and unproven statements in this tweet. You’d think a JD candidate would be able to back up all of he/him assertions with some facts, right? Here’s he/him following tweet:

“Do you know what it’s like to have people in power call for your death, to have them shout their bloodlust so loudly that the entire country hears it, only to have everyone blame YOU for the death that results from this?”

I’m no JD candidate yet I did take debate class in high school and learned how to prove my case. Here ‘ya go, Livio:

Yes, police do kill people. They kill in self defense, a criminal committing a crime, protecting a victim from a criminal, and in some cases of police brutality. They also kill people who are unarmed.

Police have contact with MILLIONS of people throughout the US every year. Last year, according to the Washington Post’s database of police-involved shootings, nine unarmed black people were shot and killed by the police, compared to 19 unarmed white people.

My point is that police kill less unarmed black people than white. What is your point, exactly?

Yes they do. Seattle protests that police kill people while they also loot, riot and burn down businesses. Because nothing says protestors are against police brutality by creating violence throughout your city.

I would also put forth that your definition of “protests” has been arbitrarily expanded to include the illegal occupation of public/private property and terrorization of fellow tax-paying citizens.

3. “Republicans say, repeatedly, these protestors deserve to be shot and killed”

Please provide evidence where republicans state that PEACEFUL protestors deserve to be shot and killed. We all know that the First Amendment, with qualifiers, applies to protests. Why leave out that one important word? I’ll wait.

For all those “protestors” who riot, loot and burn businesses, yes, they do deserve to be shot. That’s called self defense or affirmative defense, and one has a reasonable right to defend real or personal property. As a JD candidate, do you believe that law-abiding taxpayers and property owners should forfeit their legal rights to protestors?