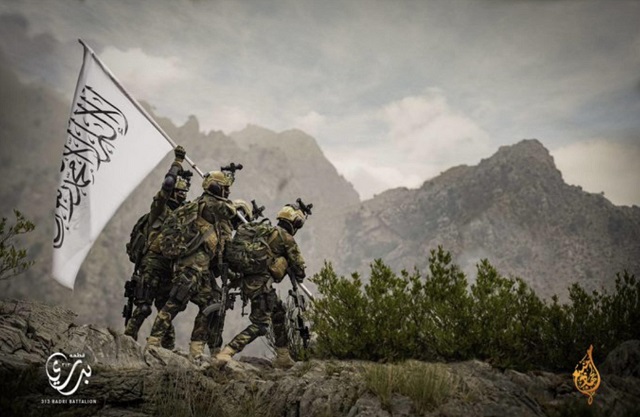 I guess you don’t need “F-15s and nuclear weapons” to take on the US government after all!

The below text reads, “The Taliban also seized Nimroz airfield.”

Our hostile elites got rich off the war contracts and bought themselves lavish palaces but the American people just got stuck with the bill and had their kids sent home in body bags.

On Sunday (August 8), the Islamic terror outfit Taliban captured three provincial capitals including the strategic city of Kunduz in Afghanistan. The terrorists have intensified their offensive in the northern part of the country after the US announced to withdraw its troops by August end.

It must be mentioned that dozens of border crossings and districts have fallen into the hands of the Taliban in the past months. Kunduz, a city with 2.7 lac residents, is located at the gateway to the mineral-rich provinces in Northern Afghanistan and South Asia. Kunduz is also connected via highways to Kabul, the capital of Afghanistan. Moreover, controlling Kundz implied that the Taliban now is in charge of the opium cartel that is smuggled through the region.

On Sunday, the Taliban lay siege on all government buildings in the city, except the Afghan army base and the airport (which is still controlled by the Afghan security forces). The development was confirmed by legislator Amruddin Wali and Taliban spokesman Zabihullah Mujahid. During the forceful capture of Kunduz by the Taliban, about 14 dead bodies and 30 injured people were rushed to the hospital. Meanwhile, a spokesperson of the Afghan security force informed that the government would launch a counteroffensive to recapture lost territory.

Besides Kunduz, the Taliban also took over governmental buildings in Sar-e-Pul. The state officials were thus forced to vacate the city and take refuge in a nearby military base. Later in the evening, a Parliament representative Ashraf Ayni informed that the Taloqan city in Takhar province had fallen into the hands of Taliban, who had freed all prisoners from jail. A day earlier on Saturday (August 7), the Taliban took control of most of Sheberghan, including the provincial government buildings. Although the terror outfit had claimed to have captured the whole city, an Afghan security forces spokesman denied the claims. The spokesman added that they were trying to regain the city from the Taliban without causing civilian casualties.

On Friday, the Taliban captures the city of Zaranj in the Nimroz province, thus extending their stronghold from southern provinces to the Northern provinces. In total, the Taliban has captured 5 province capitals since Friday (August 6), as per reports. Ever since the US forces withdrew from Afghanistan, the Taliban has been making rapid advances in the country. Supported by the Pakistani military, the group had captured many border posts and several provincial cities.

The only reason this war is ending is because the “War on Terror” is turning inward.

The war in Afghanistan was just a giant money sink and the regime needs to regroup to take on Iran and the American people they’ve deemed “domestic enemies” and “white extremists.”