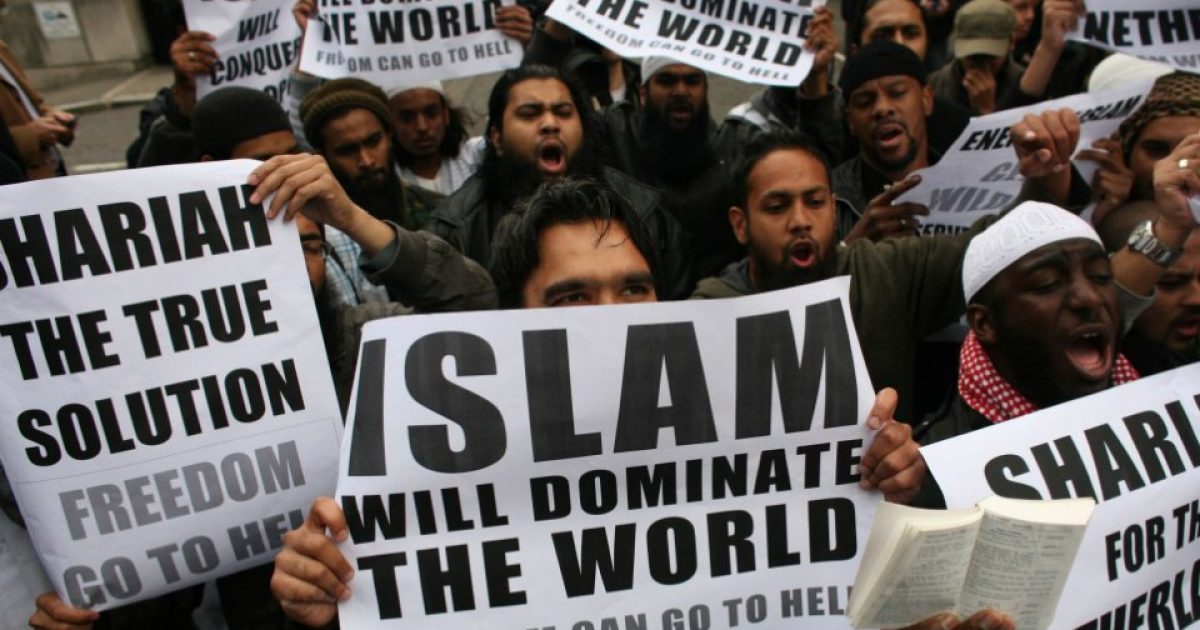 This information is vitally important for those who see what is going on in other Western nations with the influx of Muslim invaders into their countries. We are seeing it also in the united States and there are telltale signs of how far along they are moving in the culture, even with small numbers. The following information is taken from a PDF document titled Liberty vs Sharia. Read and warn others to resist the movement to Islamize America

Muslims begin moving to non-Muslim countries in increasing numbers and the beginning of cultural conflicts are visible, though often subtle.

How many nations are suffering from Islamic infiltration? One? A handful? Nearly every nation? The Islamic ‘leadership” of the Muslim Brotherhood and others wish to dissolve each nation’s sovereignty and replace it with the global imposition of Islamic sharia law. Sharia law, based on the Koran, sira and hadith, condemns liberty and forbids equality and is inconsistent with the laws of all Western nations. As the author and historian Serge Trifkovic states:

“The refusal of the Western elite class to protect their nations from jihadist infiltration is the biggest betrayal in history.”

Is there a pattern here? Theo van Gogh is murdered in the Netherlands for ‘insulting’ Islam; the Organization of the Islamic Conference demands ‘anti-blasphemy’ laws through the United Nations; France is set afire regularly by ‘youths’ (read Muslims); the rise of (dis-) honor killings…holocaust denial…anti-Semitism…deception re the tenets of Islam; hatred toward Christians and Jews and Hindus and Buddhists. The pattern for all to see is the rise of Islamic intolerance and the covert/cultural jihad to remake host societies into sharia-compliant worlds – to remove host sovereignty and replace it with Islamic sharia law. Sharia law that condemns earthly liberty and individual freedom, that forbids equality among faiths and between the sexes, that rejects the concept of nations outside the global house of Islam, that of dar al-Islam.

Open violence to impose Sharia law and associated cultural restrictions; rejection of host government, subjugation of other religions and customs.

The website www.thereligionofpeace.com keeps track of the number of violent jihad attacks as best it can. The site lists more than 14,000 attacks since September 2001. It is worth a visit. What is occurring, however, that is likely inestimable are events where Muslims are bullied by other Muslims for not being “Muslim enough,” where non-Muslims are intimidated into doing or not doing what they desire, where remnant populations are in a death spiral simply for being non-muslim in a predominantly Muslim area. Christians, Jews, Hindus, Buddhists Animists and Atheists meet with death, property destruction or confiscation, forced conversion, rape, excessive taxation (the jizya), enslavement, riotous mobs and various other forms of Islam (in-) justice at the hands of Muslims in Sudan, Philippines, Kenya, Malaysia, India, etc. And let us not forget ‘death to Apostates’ the world over.

Islam becomes the only religious-political-judicial-cultural ideology.

The House of Islam (“peace”), dar al-Islam, includes those nations that have submitted to Islamic rule, to the soul crushing, liberty-condemning, discriminatory law of Sharia. The rest of the world is in the House of War, dar al-harb, because it does not submit to Sharia, and exists in a state of rebellion or war with the will of ‘Allah.’ No non-Muslim state or its citizens are “innocent,” and remain viable targets of war for not believing in ‘Allah.’ The Christian, Jewish, Coptic, Hindu and Zoroastrian peoples of world have suffered under subjugation for centuries. The Dhimmi-esque are forbidden to construct houses of worship or repair existing ones, economically crippled by the heavy jizya (tax), socially humiliated, legally discriminated against, criminally targeted and generally kept in a permanent state of weakness, fear and vulnerability by Islamic governments.

It should be noted that forced conversions (Egypt) and slavery (Sudan) are still reported. Homosexuals have been hung in the public square in Iran. Young girls are married to old men. Apostates are threatened with death. “Honor” killings are routine. Women are legally second-class citizens, though Muslim males insist they are “treated better” than in the West. These more obvious manifestations may distract from some less obvious ones such as the lack of intellectual inquiry in science, narrow scope of writing, all but non-existent art and music, sexual use and abuse of youth and women, and the disregard for personal fulfillment, joy and wonder. Look into the eyes of a recently married 12-year-old girl to see the consequence of the moral deprivation spawned by Islam.