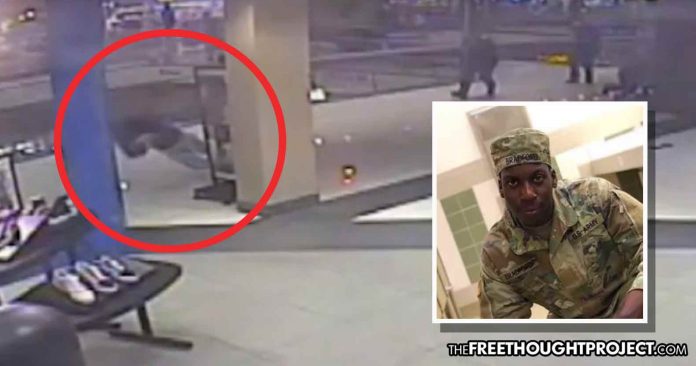 Hoover, AL — On Thanksgiving night, 2018, an armed assailant opened fire inside an Alabama shopping mall, shooting an 18-year-old male and a 12-year-old girl. Shortly after the shots rang out, a Hoover police officer engaged a man with a gun, opened fire, shot him in the back multiple times and killed him. Police then released a statement championing their officer and patting themselves on the back for stopping a potential mass shooting. But the man they shot was not the shooter—he was the hero trying to stop him.

Earlier this year, authorities in Alabama announced that they will not be charging the officer who killed this innocent man so the family is seeking justice through civil means. The family of the victim, Emantic Fitzgerald Bradford Jr., is suing the yet-to-be-named cop who was seen on video shooting Bradford in the back as he pursued the shooter.

As FOX 43 reports this week, Bradford’s mother, April Pipkins, filed the lawsuit against the unnamed policeman and the city of Hoover Friday, alleging that the officer did not follow his training, violated department policy by not turning on his body-worn camera, failed to issue verbal commands before opening fire and did not verify whether Bradford posed a threat before killing him.

As TFTP reported, in February, Alabama Attorney General Steve Marshall released a 26-page report concluding that the officer was “justified and not criminal” in fatally shooting Bradford, “who was running toward the initial shooter and victim with a firearm visibly in hand,” NPR reported.

“A reasonable person could have assumed that the only person with a gun who was running toward the victim of a shooting that occurred just three seconds earlier fired the shots,” the report concludes.

While this may be true in most circumstances, Bradford was not shooting, was not pointing the gun, and he was shot in the back as he ran after the real shooter.

Holding no punches, Bradford’s father let the court have it after they came to this decision.

“My son was murdered. And you think I’m going to let it go?” said Emantic Bradford Sr. as quoted by AL.com. “That was a homicide … you killed my son. You are a coward. You’re a coward too, Steve Marshall.”

As TFTP reported at the time, this case was swarmed in controversy as police originally claimed to have killed the shooter. But they actually killed the hero and let the shooter go.

The slain 21-year-old’s family says he was at Riverchase Galleria in the Birmingham suburb with his cousin and friends the night of Thanksgiving 2018 when, police allege, Erron Martez Dequan Brown began shooting. Possessing a permit to carry a weapon, Bradford pulled out his gun and was helping people escape when the unnamed Hoover police officer working as mall security shot him, they say.

“…two males engaged in a physical altercation on the second floor concourse area of the Riverchase Galleria, near the entrance to the Footaction. During the fight, one of the males produced a handgun and shot the other male twice in the torso. Two uniformed Hover Police officers providing security at the mall were in close proximity and heard the gunshots. While moving toward the shooting scene, one of the officers encountered a suspect brandishing a pistol and shot him. That individual, a 21-year-old male from Hueytown, was pronounced dead at the scene.”

After this original statement, however, police were forced to retract it and quickly issued an update. Authorities initially said Bradford, known as E.J., was the shooter—but he was not.

Late that night, after they already assassinated his character, police changed their story, saying that while Bradford was involved in “some aspect of the altercation” and was armed with a handgun, he likely did not fire the rounds that injured the two others.

“We regret that our initial media release was not totally accurate, but new evidence indicates that it was not,” Hoover police spokesman Capt. Gregg Rector said.

The police were forced to issue the retraction so quickly, not in the name of transparency, but for the public’s safety because the real gunman was still at large.

“Not only did they assassinate his person but they truly assassinated his character,” high profile attorney Benjamin Crump said at a news conference. “[The officer] saw a black man with a gun and he made his determination that he must be a criminal.”

The suit, which also alleges Fourth and 14th Amendment violations, excessive force among them, seeks a jury trial and unspecified compensatory and punitive damages and attorneys’ fees.

This case was similar to a story from the same month in which a “good guy with a gun” was killed by police. The tragedy unfolded in November after a hero security guard stopped what was quickly becoming a deadly mass shooting, only to be shot by police moments later police. Jemel Roberson, 26, was working security at a local night club when his heroism got him killed.

In both cases, the NRA has remained entirely silent. Shameful indeed.