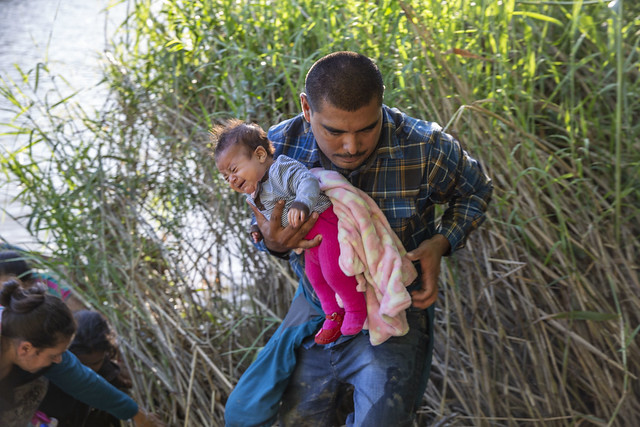 Roughly half of the adult men crossing our southern border are carrying a child to use as a “get out of jail free card,” Senator Ted Cruz reported during a press conference at the US-Mexico border on Monday.

In 2014, roughly 1% of adult men crossing into this country had a child with them.

Today roughly 50% of men crossing have a child with them.

We have told traffickers children are a “get out of jail free card.” It is an incentive from Congress to risk that child’s life. @tedcruz pic.twitter.com/7CV4qxZHvs

Earlier today I visited the Central Processing Center here in the valley, visited the McAllen headquarters.

One of the more disturbing figures that I heard from the chief is in 2014, not too many years ago, of the adult men crossing illegally into this country roughly one percent had a child with them.

Today roughly fifty percent of the adult men crossing into the Rio Grande sector have a child with them.

The reason for that, the fault of that is the U.S. Congress because we have told the traffickers, the human traffickers, we’ve told the drug traffickers, if you bring a child, that child is essentially a get outta jail free card.

It is an incentive from the United States Congress: Go and find a small child and take that arduous journey, risk that child’s life.

Cruz went on to note how DNA tests showed “roughly 30 percent of those family units were fraudulent, in other words, the adults weren’t related to the kids.”

This incentive structure was created by the horrendous, bipartisan open borders/government-funding bill passed in February and signed into law by President Trump. To his credit, Ted Cruz was one of only 16 senators who voted against it.

Here’s some images from just the past few weeks shared by US Customs and Border Protection: Breitbart’s John Binder reported last month that a new analysis projects “nearly 740,000 border crossers and illegal aliens are expected to be released into the interior of the United States this calendar year.”

Princeton Policy Advisors analyst Steve Kopits expects about 309,000 foreign minors and 226,000 adult border crossers to be released into the interior of the U.S. by Department of Homeland Security (DHS) officials by the end of the year. Additionally, about 202,000 adult illegal aliens are expected to enter the U.S. interior, undetected, according to Kopits’ forecast.

This projection indicates that far more than half a million foreign minors, adult border crossers, those claiming asylum, and illegal aliens are set to be released into the interior of the country — about 356,000 of which are a direct result of the February spending package approved by Republicans and Democrats and signed by President Trump.

As Binder reported in May, “100 percent” of adult border crossers with children are being released in the interior of the US and most are swiftly handed work permits.