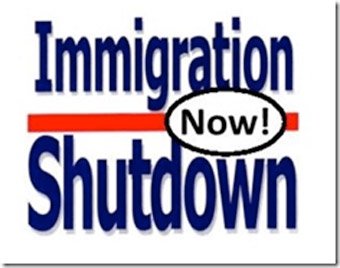 Why exactly do we need to import 1.0 to 1.2 million legal immigrants annually onto our shores? Why does our U.S. Congress allow 500,000 illegals to jump our borders, annually? Why do we endure 22 to 25 million illegal alien migrants within our borders? (Source: Yale Illegal Immigration Study, October 2018.)

Why do we need another 140 million more people added to the United States by 2050? Do you possess a reasonable answer to that question? Will 140 million people improve anything in our country? Can you name one single benefit?

If you wander across Social Media these days, you find a lot of angry, thoughtful and reasonable people speaking their minds.

One of my friends, Gary Gobel said, “I support a moratorium on all immigration until we get the current situation sorted out. Today, we have some 22 million of foreign nationals in our country, exact number is disputed and a poorly managed and thus broken visa program.

“Until we get our enforcement back up and running, deportations made and a competent visa program, all based on current legislated law—stop all immigration. This is a nation and not a charity; we owe no one immigration. Just like you no longer drink your mother’s breast milk, the days of a young growing infant nation are behind us. We have 330 million citizens and plenty of talent in this nation and the days of needing immigration to develop instead of border control are gone.

“We are a mature nation of expensive social programs, supported by our tax paying, law abiding citizens. Get control of the situation and then maybe we can talk very limited legal immigration again based on merit and full assimilation and no……that’s no, ethnic quotas.”

Gobel said, “This is the true hope of the world and not uncontrolled migrations, the answer is making your home better. Doing what our forefathers and patriots did for us….work hard, be involved, fight for justice and freedoms, and form a government worth keeping.

“In the beginning of this country, it was a time for immigration but, that time has passed. We have a right to our life style, standard of living, our freedoms and our sovereignty…….an earned right. We don’t need to tolerate foreign nationals protesting to make us feel bad that we don’t want illegal immigration……or, any immigration for that matter. We require them to respect our nation as a sovereign nation of laws and accomplishments that should be imitated as a template for success. Build that wall.”

Or, place our best technology on the border to intercept and repel all illegal migrants. Put our soldiers on the border at ¼ mile outposts, so they protect us from this invasion, instead of 450,000 military people fiddling their thumbs on 700 bases in 80 countries around the world. Does that make sense?

Article IV, Section 4 of the U.S. Constitution reads, “The United States shall guarantee to every State in this Union a Republican form of Government; and on Application of the legislature, or of the Executive against domestic violence.”

That’s the responsibility of our president and Congress. Both fail us miserably and have been for the past 40 years. Both houses remain corrupt, a pack of liars and betray their oaths of office. Proof: the invasion has continued since 1986 without pause.

Gobel said, “I was in a discussion with a liberal friend of mine about illegal immigration and she proclaimed there should be open borders! Oh, I said, why’s that? She said people should be free to go as they please and come to this country as they please. Really, I said, well tell me…. why do so many Mexicans want to come to the United States?

“She said for a better economic future and a better place to live. I said, ‘You mean it’s better here than Mexico…. she said, ‘Duh, of course it is.’ OK, I said…. now tell me…. why is that? She was a little surprised for a second then she said well, they have a bad economy, no jobs, violence……’It’s full of slums.’ I see, I mulled that for a second or two then asked her…. ‘Why is that?’ She said, ‘I don’t know.’ I said……when you do, come and talk to me about open borders.”

Mexico’s slums derive from an illiterate population and endemic corruption from the ruling class. That won’t change, so we see no end of the Mexicans jumping our borders. When you import people from the slums, you create more slums in your own country.

“Mexico is the neighbor of one of the most affluent countries in the world in a rich region,” said Gobel. “It has two great oceans on either side, ports, natural resources, considerable population and tons of culture and history……yet, it’s a shit hole. Why? How come there is no automobile industry, no airliners produced there, no vibrant maritime shipping industry, a stable government, a history of law and order…. why? Well, look at the US, we have all that and while we have violence, criminal activity, corruption and a government that is involved all over the world in political adventurism with our military…. we still are a better place to live.

“Mexico uses illegal immigration as an economic and social relief valve. By allowing the teaming masses of unemployed, disgruntled or whatever Mexicans to migrate north they relieve themselves of some of the political pressure to change. How much more successful would stopping illegal immigration be if our trading partner to the south helped to enforce the border from their side? What if those deported for violating immigration laws were incarcerated upon their return to Mexico for a short stay in jail rather than being immediately free to find another coyote to take them across the Rio Grande?

“Simple answer is, Mexico likes illegal immigration……a tribute and admission of their failed state and indictment of their leadership. Why is that?

“Now let’s assume that through mass immigration and the power of the vote, Mexicans succeed through invasion immigration in making the southern US into Norte Mexico? Do you think it would be the same successful region it is now??…. look at the history of Latin countries. Do you see any of them being on a par with the United States? Answer is a resounding “NO.” So, while Mexico remains the romantic homeland for many, it is in fact a failed state, racked by violence, organized crime and a dismal economy for most of its people. So, open borders? Tell me why we would want it here.”

What makes sense to you? What are you doing about it? Would a ten year shutdown of all immigration be reasonable? Answer: you betcha!