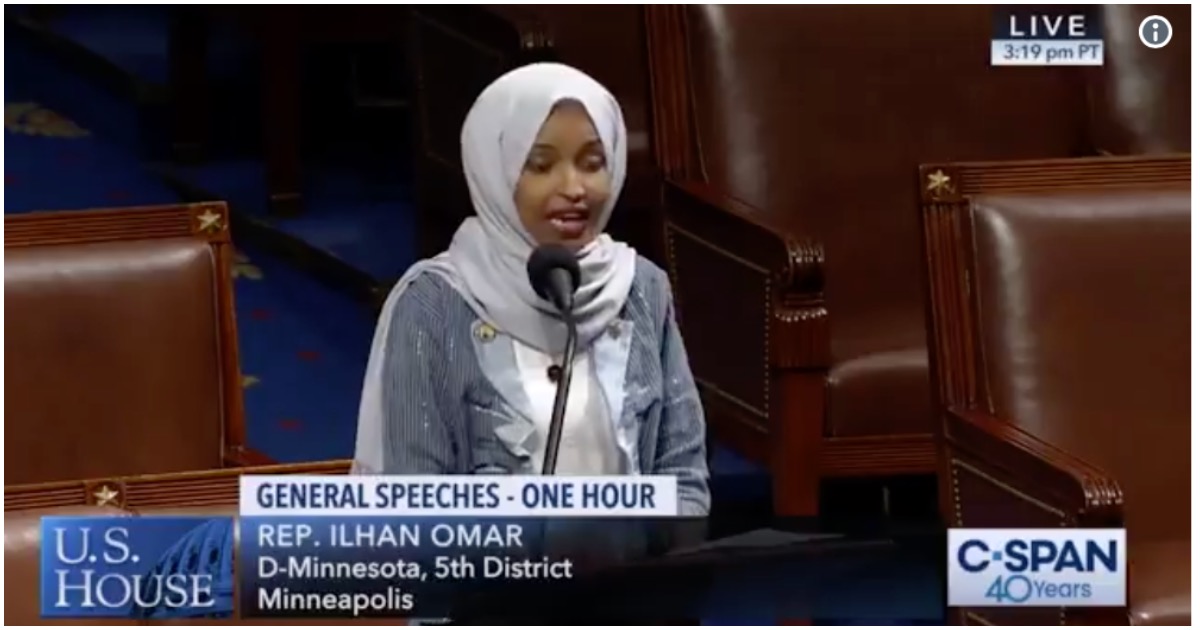 Just like her colleague Rep. Rashida Tlaib (D-MI), Rep. Ilhan Omar (D-MN) not only tries to play the victim, but immediate goes on the attack when she gets the opportunity. This week, Omar attacked and mocked those of the Christian faith who would dare to call for the abolition of abortion and the criminalization of those that engage in the murder of the unborn.

On Wednesday, Omar took to the floor of the House of Representatives to not only voice her anti-life vitriol but her anti-Christian and anti-American views in an attempt to play the victim as a woman but mocking and attacking the very faith that was what our country was founded upon.

“I rise today to defy the horrifying attacks happening against women’s reproductive rights all across this country,” Omar said. “Religious fundamentalists are currently trying to manipulate state laws in order to impose their beliefs on an entire society, all with complete disregard for voices and the rights of American women.”

And what of the horrifying acts occurring to the innocent unborn Americans, Ms. Omar? Will you not raise your voice against those being beheaded, dismembered, burned alive… oh wait, that is how Islam does things. My bad.

Rep. Ilhan Omar (D-MN) attacks conservative people of faith on the House floor, suggests that their concern for unborn babies is not genuine and they are hypocrites pic.twitter.com/XGiWwB51GV

No, she isn’t talking about Islamists such as herself or the subversive members of designated terror organizations like that Muslim Brotherhood front group Council on American-Islamic Relations (CAIR), she’s specifically talking about conservative Christians here.

“I am frustrated every single time I hear people speaking about their faith and pushing that on to other people because we know those so-called religious politicians, when it comes to their life, their choices, they want to talk about freedom,” she added. “But when it comes to other people’s lives and other people’s choices, they want to talk about religion. This should outrage every single person. It certainly outrages me and we can no longer stand for it.”

Well, we’re sick of hearing about your stupid hijab and you pushing that on the US Congress, and your Ramadan celebrations and your Iftar dinners that are an affront to the God to whom this nation was built. And yes, our first forefathers were clear that they didn’t come here for religious diversity and they weren’t here to establish Muhammadism. They came for the advancement of the Christian faith.

IN THE NAME OF GOD, AMEN. We, whose names are underwritten, the Loyal Subjects of our dread Sovereign Lord King James, by the Grace of God, of Great Britain, France, and Ireland, King, Defender of the Faith, &c. Having undertaken for the Glory of God, and Advancement of the Christian Faith, and the Honour of our King and Country, a Voyage to plant the first Colony in the northern Parts of Virginia; Do by these Presents, solemnly and mutually, in the Presence of God and one another, covenant and combine ourselves together into a civil Body Politick, for our better Ordering and Preservation, and Furtherance of the Ends aforesaid: And by Virtue hereof do enact, constitute, and frame, such just and equal Laws, Ordinances, Acts, Constitutions, and Officers, from time to time, as shall be thought most meet and convenient for the general Good of the Colony; unto which we promise all due Submission and Obedience. IN WITNESS whereof we have hereunto subscribed our names at Cape-Cod the eleventh of November, in the Reign of our Sovereign Lord King James, of England, France, and Ireland, the eighteenth, and of Scotland the fifty-fourth, Anno Domini; 1620. (emphasis mine) –Mayflower Compact

Why do I present this? Well, that was the first covenant in North America from our forefathers.

That would later be followed by another founding document hundreds of years later, the Declaration of Independence, in which Thomas Jefferson

The unanimous Declaration of the thirteen united States of America, When in the Course of human events, it becomes necessary for one people to dissolve the political bands which have connected them with another, and to assume among the powers of the earth, the separate and equal station to which the Laws of Nature and of Nature’s God entitle them, a decent respect to the opinions of mankind requires that they should declare the causes which impel them to the separation.

We hold these truths to be self-evident, that all men are created equal, that they are endowed by their Creator with certain unalienable Rights, that among these are Life, Liberty and the pursuit of Happiness.–That to secure these rights, Governments are instituted among Men, deriving their just powers from the consent of the governed, –That whenever any Form of Government becomes destructive of these ends, it is the Right of the People to alter or to abolish it, and to institute new Government, laying its foundation on such principles and organizing its powers in such form, as to them shall seem most likely to effect their Safety and Happiness… (emphasis mine) –Declaration of Independence

Of course, Thomas Jefferson knew how to deal with Islamists in his day because he didn’t view them as “radical Muslims,” but as devout because he read what their book, the Koran,

actually said and knew they were a lawless, corrupt, murderous and thieving people who followed a false god and they could only be dealt with in a certain manner… and he dealt with them in that manner.

But it is worth noting that Omar is completely against our forefathers and against the biblical foundations of America. She has enjoyed the freedom that America provides, but she has been an ungrateful woman over it. In fact, it is now being argued that she may have violated the law during her naturalization process.

Omar, like Tlaib, should be criminally investigated, not only for the apparent fraud in her naturalization process, but also for marrying her own brother to commit immigration fraud.

In conclusion, Omar is right about one thing: every single person should be outraged, but not by those that seek to protect life, but by an antichrist, anti-American immigrant standing in the place of a representative who mocks and attacks the Christian faith, the law of God and our forefathers who pledged their lives, fortunes and sacred honor to preserve our freedom and that pledge was brought about through faithful preachers of the time.