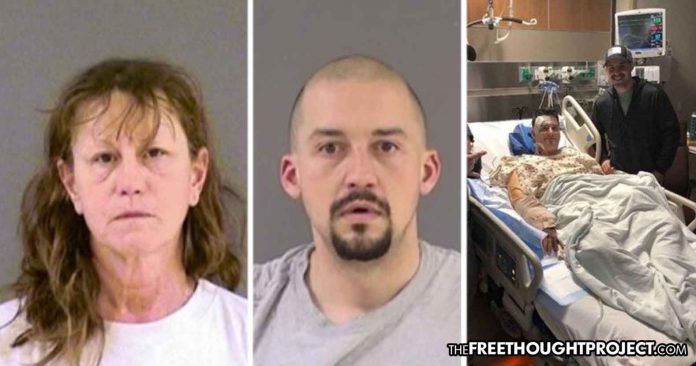 Caldwell County, TX — The Free Thought Project has reported on multiple instances in which police officers invade a home and are shot in the process. Thousands of these no-knock raids take place across the country every single year, most of which are over alleged possession of substances deemed illegal by the state. But what happens when people defend their homes against these home invasions? Well, as the following case illustrates, sometimes justice can be served.

Last February, Kimberly Moore, 54, and Eduardo Padilla, 33, defended their home, Moore’s daughter and two grandchildren from an armed invader who entered their property in the middle of the night. However, because that armed invader was a police officer, Caldwell County Sheriff’s Deputy Jay Johnson, Moore and Padilla were both charged with aggravated assault with a deadly weapon and deadly conduct discharge of firearm.

According to the Caldwell County sheriff, deputies were responding to a call on Hidden Oak Road in Dale at around midnight. Deputies “took fire,” the sheriff said, and a deputy received gunshot wounds before being taken to a hospital in Austin.

Officials claim the deputy was responding to a theft call, but an attorney for Moore and Padilla said they had no idea the man entering their house was a cop and they never made a call. Moore and Padilla pleaded not guilty to all charges, claiming they fired on the deputy in self-defense.

In May of last year, Padilla and Moore were indicted on a charge of deadly conduct with a firearm while the jury refused to indict them on the more serious charge of aggravated assault with a deadly weapon.

Now, after having this charge hang over them for a year, the District Attorney has finally dropped all charges.

“I was expecting to go to trial, basically tell my story there and then see what the jury had to say about this,” Johnson said in a recent interview. But that will no longer happen.

District Attorney Fred Weber said in a statement last month that the charges have been dropped “in the best interest of justice.” He said the couple has said that they thought they were shooting at someone who had been making threats at them – not a law enforcement officer, according to KVUE.

“This decision is based on a set of facts unique to this case and does not diminish my support of our local law enforcement personnel nor discount the dangers they encounter on a daily basis,” Weber said.

Weber upheld the couple’s right to self-defense, saying they had the legal right to protect their property from whom they thought was an intruder.

Naturally, the police union is furious and released a statement with their opinion on the decision.

The Caldwell Sheriff’s officer is likely furious as well, but they noted that they support the decision of the DA.

“While the circumstances surrounding this event are unfortunate, Caldwell County Sheriff Daniel Law supports the decision made by Caldwell County District Attorney Fred Weber to drop the charges against Kimberly Moore and Eduardo Padilla,” the Cadwell County Sheriff’s Office said Wednesday. “Sheriff Law does not have any more information to provide comment on in this case.”

Weber said that the deputy would’ve been just fine had he “displayed some common sense” when he went to the house that night.

“Had he displayed some common sense about how he dealt with this, I have no doubt this would not have happened,” Weber said.

As KVUE reports, he said Johnson never activated his emergency lights to signal that a deputy was in the area. He also went onto Moore’s property, past a gate marked with a “no trespassing” sign, even though there was no emergency.

Johnson disagrees and claims his lack of lights, his sneaking onto the property, and not announcing himself, was to handle the situation with the lowest level of law enforcement.

“I was just hoping for justice. I work in the justice system, and that is what you expect to happen,” Johnson said. But what about the hundreds of other innocent people who are shot every year by police who never see justice?

While it is certainly tragic that Johnson was shot, this family didn’t go onto his property and shoot him. He trespassed on their property. His negligence led to his own injuries and justice has most assuredly been served as this innocent couple was not thrown in a cage or killed because of a cop’s lack of common sense.