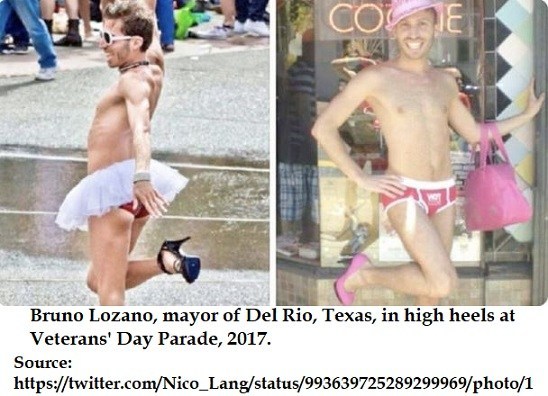 THIS IS NOT A JOKE.

Del Rio is a small (20.2 sq. miles) border town of 40,549 in southern Texas, home to the Laughlin Air Force Base, the busiest U.S. Air Force pilot-training complex in the world.

Small city elections in Texas are nonpartisan. Lozano said: “I don’t even think people during the primary – Democrats or Republicans — even knew who I was until I won.”

Lozano is a homosexual man who wore a tutu and 4″ high heels in Del Rio’s Veterans Day parade the year before he was elected mayor.

Prompted by the military’s “Don’t Ask, Don’t Tell” (DADT) policy, Lozano joined the Air Force in 2004 on a 15-month special needs contract — whatever that means.

While the DADT policy was the sole reason why Lozano was able to join the forces, it is also the reason why he decided to step down. He recounts his time in uniform: “It’s an awkward position to be in when you’re in security forces, you’re abiding by the policy, but others are not.”

There was once a time when a friend of his brought his boyfriend onto the base. The friend, who was highly discreet when in uniform, was busted, and it was Lozano who had to give him the bad news. Immediately after, he said to himself, “I just can’t do this,” and put in his papers.

Lozano says politics is addictive: “Realizing that you’re the guy who has the potential to make or break the city, and then continue moving forward. If I make it, great and then I can do the district. I can go to the Senate. From there, who knows?”

Does that mean we should brace ourselves for a transvestite U.S. senator or even president?