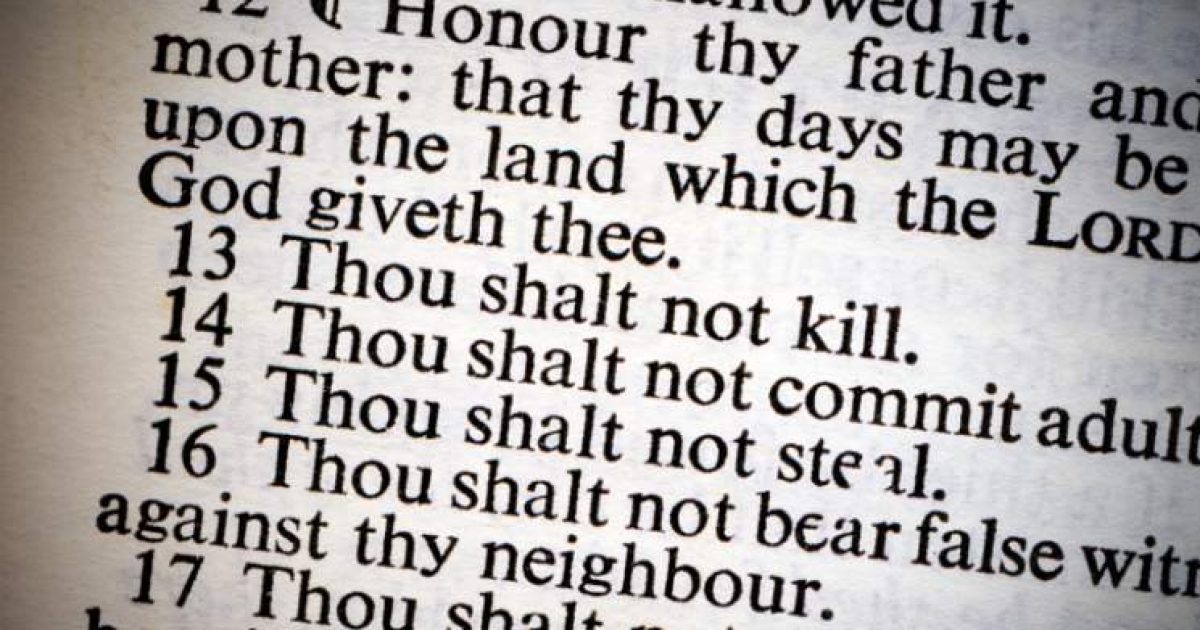 Texas State Representative Dan Flynn of Van has filed a bill (HB 307) in the state legislature stating: “The board of trustees of an independent school district may not prohibit the posting of a copy of the Ten Commandments in a prominent location in a district classroom.”

In speaking to the Star-Telegram, Flynn said, “I think it’s a good idea. If a teacher wants to put it in her classroom, she should be able to do it just as if she wanted to put up Halloween, Thanksgiving or any other decorations.

“I think it’s a good list of disciplines that young people would find very meaningful to them,” he added.

I agree. Who can argue with you shouldn’t covet, commit adultery, steal, murder or bear false witness against your neighbor? And yes, what’s wrong with honoring one day in seven to rest? What’s wrong with not making idols and claiming they are gods and serving them as though they are your creator? What’s wrong with not having other gods before the true Creator, the God of our founding? Nothing, not one thing.

In fact, the Bible was used all in our education systems, both in public and private and in the homes. Some have even attributed America’s early literacy rate to the Bible being read each day in homes.

Of course, there are anti-Americans who don’t know their history who claim it’s unconstitutional.

“It’s unconstitutional,” said Bob Tuttle, a professor of law and religion at the George Washington University Law School. “The government is limited in its ability to display religious messages.

“You couldn’t have a banner hanging across the entrance to City Hall that says ‘Jesus saves.’ That would be the government invoking religion,” he said. “That’s what really is going on here with the Ten Commandments. Schoolchildren are subject to being a captive audience for particular government messages.”

“It’s a statement of what it’s like to live your life in the company of God,” he said. “It’s appropriate for congregations. … But I do not believe that it’s something I want the state trying to explain.”

Well, I don’t think that simply posting the Ten Commandments means the state has to explain it.

For the word of God is living and active, sharper than any two-edged sword, piercing to the division of soul and of spirit, of joints and of marrow, and discerning the thoughts and intentions of the heart. And no creature is hidden from his sight, but all are naked and exposed to the eyes of him to whom we must give account. -Hebrews 4:12-13

put a few things that our founders did under our Constitution regarding the Bible, even in schools.

Samuel Adams, who helped draft the Articles of Confederation, once wrote, “If we continue to be a happy people, that happiness must be assured by the enacting and executing of the reasonable and wise laws expressed in the plainest language and by establishing such modes of education as tend to inculcate in the minds of youth the feelings and habits of piety, religion and morality.”

Benjamin Rush, a signer of the Declaration of Independence, stated, “The only foundation for a useful education in a republic is to be laid in religion. Without this there can be no virtue, and without virtue there can be no liberty, and liberty, is the object and life of all republican governments. Without religion, I believe that learning does real mischief to the morals and principles of mankind.”

Fisher Ames, a Massachusetts representative to the First, Second, and Third Congresses and a Federalist to the Fourth Congress, made a case for the Bible as a textbook in schools: “Its morals are pure; its examples captivation and noble. The reverence for the sacred book that is thus early impressed lasts long, and, probably if not impressed in infancy, never takes firm hold of the mind.”

George Washington once addressed Delaware chiefs among the Lenape Indians who desired to train their young people in American schools, saying, “You do well to wish to learn our arts and ways of life, and above all, the religion of Jesus Christ. These will make you a greater and happier people than you are. Congress will do everything they can to assist you in this wise intention.”

In 1789, during the same time when the First Amendment was written, then President Washington signed into law the Northwest Ordinance, which states, “Religion, morality, and knowledge, being necessary to good government and the happiness of mankind, schools and the means of education shall forever be encouraged.”

Gouverneur Morris, who represented Pennsylvania at the convention in Philadelphia in 1787 and subsequently signed the U.S. Constitution, said, “Religion is the only solid basis of good morals; therefore education should teach the precepts of religion and the duties of man towards God.”

John Adams, who served as America’s first vice president and second president, stated, “Suppose a nation in some distant region should take the Bible for their only law book and every member should regulate his conduct by the precepts there exhibited. … What a Utopia. What a Paradise would this region be. I have examined all (religions)… and the result is that the Bible is the best book in the world. It contains more of my little philosophy than all the libraries I have seen.”

Noah Webster, the “father of American scholarship and education,” stated, “In my view, the Christian religion is the most important and one of the first things in which all children, under a free government, ought to be instructed. … No truth is more evident to my mind than that the Christian religion must be the basis of any government intended to secure the rights and privileges of a free people.”

Joseph Story, associate justice of the U. S. Supreme Court and the “father of American jurisprudence,” asked, “Why may not the Bible, and especially the New Testament, without note or comment, be read and taught as divine revelation in the college (school) – its general precepts expounded, its evidences explained and its glorious principles of morality inculcated? … Where can the purest principles of morality be learned so clearly or so perfectly as from the New Testament?”

Lastly, dispelling the myth that Thomas Jefferson never intermixed Christianity and government, in 1805 he was elected the first president of the Washington, D.C., public school board, under which schools used the Bible as a text for learning. Just three years after Jefferson left the school board and Washington, D.C., for retirement at Monticello, one principal reported to the board of trustees the progress his students made in reading and spelling, using the Bible as a text:

In fact, the first hundred colleges in America were founded upon Judeo-Christian tradition, belief and practice, including Yale, Princeton and Harvard, the last of which had the official motto, “For Christ and the Church.”

This is Flynn’s second attempt at proposing the measure due to the fact that teachers have a desire to put them in their classrooms.

“They want to put up a list of good, healthy guidelines for a good life,” he said.

“We live in a day where everyone wants to question everything you do,” Flynn said. “A teacher’s classroom is her office, where she should be able to put things she wants to. I want to not let school boards prohibit them from doing it if they want to.”

Flynn is hopeful that it will pass this time around.

Honestly, while I’m glad Flynn wants to push for this and it is honorable, I wish more and more parents would take a stand and exodus the public indoctrination centers, let them wither on the vine and educate their children themselves as the Lord commanded us (Deuteronomy 6). This is one area you don’t need Washington or the state to advance liberty now and for future generations and you can start for free by clicking here.