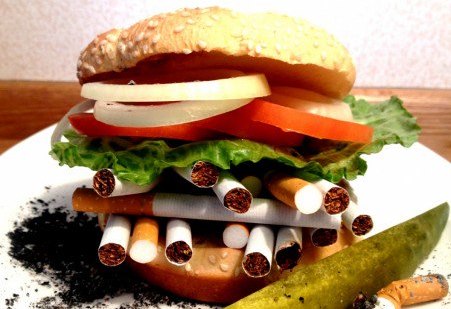 (Natural News) People are quick to judge smokers as folks who have completely given up on their health and wellness, knowing all the chemicals in their “stogies” are robbing their body of nutrients and filling their lungs and blood with carcinogens. The irony of that judgment comes when people who don’t smoke find out the hard way that most of the chemicals in cigarettes are also found in common foods, over-the-counter medications, and yes, in vaccines.

That bad news sometimes arrives when the oncologist informs them that they have cancer, but nobody can seem to figure out how they got it. Medical doctors usually blame genetics, only because they never took a single class on nutrition in medical college, and even if they did, they still have no clue how much it matters. Let’s take a close look at the chemicals in cigarettes that invade common foods, water, prescription medications, and immunizations.

Most cigarettes are white because they’re rolled in paper, but paper comes from trees, and trees are brown. The paper is bleached. Smokers are smoking a little bit of bleach with every inhale. It adds up over time. Bleach burns your soft epithelial tissue inside your throat, lungs, stomach, and your cleansing organs, leading to cancer of the pancreas, bladder, and prostate.

Most white foods are bleached too. Think about white bread, white flour, white pasta, white sugar, white salt, and white rice (except for basmati). Even white coffee filters are bleached. Quit judging smokers for sucking down chemicals all day when you’re probably doing the same. Make that change immediately.

Formaldehyde is embalming fluid used to preserve corpses for open casket viewings. You can find this deadly ingredient in cigarettes, carpeting, new clothing, and in most vaccines. Pro-vaxxers swear up and down there’s not enough in vaccines to cause damage to the humans that are injected with it, but then again, the vaccine industry has shelled out over $4 billion, yes billion, in vaccine injury damages in the past few decades, mostly for the deadly multi-dose influenza vaccines that are also loaded with mercury.

Never ever let a doctor or nurse stick a needle in your muscle tissue and inject formaldehyde or mercury (a.k.a. thimerosal), because there is NO safe level for humans, no matter what they say in those “peer review” journals.

Tobacco harvesters use deadly chemical insecticides to rid their farms of hornworms and budworms. These same chemicals remain on and inside the tobacco leaves, then get smoked and serve as the “fuel for the fire” that breeds lung cancer cells.

Genetically modified corn, soy, and canola are crops that are modified by scientists in laboratories to contain insecticides that kill rootworm beetles that eat corn, bean leaf beetles and stink bugs that eat soy, and army worms and cutworms that eat canola. These DNA-embedded chemicals dissolve the digestive tract of the insects and destroy their reproductive abilities.

What do you think those same genetically-infused chemicals do to humans? The science is settled – GMOs cause liver and kidney damage in animals, and humans are animals, in case you forgot.

Tobacco farmers use boatloads of chemical herbicides to fight off “superweeds” that strangulate tobacco plants and decrease yield. The most popular herbicide in the world is Roundup, manufactured and sold by Monsanto. Roundup is comprised of about 50 percent glyphosate, an acid molecule implicated in dire health consequences for humans around the globe. Smokers smoke it. Consumers eat it. You’ll find glyphosate in most conventional bread and children’s cereals. It’s in tap water, sugarcane, and most grain products that aren’t organic.

Nearly 200 million pounds of glyphosate gets dumped on American soil annually. Currently, the FDA and EPA have put zero regulations on glyphosate in order to protect humans, animals, or the environment. Go figure. Hundreds of tests and reliable studies have been conducted that expose the dangers of glyphosate consumption. The term “Roundup Ready” means crops also contain it in their DNA, so there’s no washing that off. Scientific correlations have also been made between glyphosate and non-Hodgkin lymphoma (NHL).

Cigarette manufacturers use ammonia to freebase tobacco so the nicotine is exponentially more potent as a vapor and reaches the heart and brain within 3 seconds. Smokers are smoking ammonia with every puff. Mix that with bleach and you have a deadly gas. Most conventional meat is bleached and ammonia-treated to kill E. coli and salmonella, then it’s dyed back pink or red to look attractive in the butcher’s window (think of steak, hamburger, salmon and tuna). Still going to make fun of smokers for knowingly ruining their health? Check your conventional meats for the same chemicals.

Lead is a highly toxic metal found in tobacco smoke and contributes significantly to cancer risk by accumulating in tissues, causing serious effects on the nervous system, brain, and red blood cells. Lead can cause behavioral problems and lowered IQ. There is no safe level of lead in the blood.

The Environmental Defense Fund (EDF) analyzed 11 years of FDA data and found lead in 20 percent of baby foods and at least 14 percent of other foods. More than a million children consume more lead than the FDA’s set limit. Parents would be wise to watch out for those lead-loaded fruit juices and cookies, and not just those cancer sticks.

High levels of aluminum can be found in cigarette smoke (699 – 1200 ?g/g). The human body does NOT need aluminum, and consuming it over time can lead to cancer and dementia. Aluminum is easily found in antacids, baking powder, processed cheeses, pickles, wine, tap water, food additives, pharmaceuticals, and many vaccines.

Tune into FoodScience.news for updates on other cigarette chemicals you can easily find in your food, water, and medicine. Be careful and read all those labels.