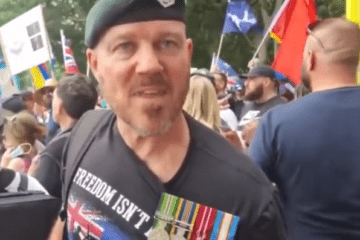 A video from Australia brings on of the best impromptu liberty speeches you will ever hear and it wasn’t long and drawn out, but straight to the point.

An Aussie who served his people was asked why he was out in protest against the current tyranny in Australia.

He then reminded the interviewer that the East Timorese were deprived of freedom but desired to have it and fought for it and won it.

The gentleman said that after serving, he though he would take it easy and relax and retire, but what is taking place in the country can no longer be ignored.

“It’s garbage,” he said, referring to the medical tyranny being imposed upon Australia.

He went on to speak about being at the very first march for freedom there in Australia, along with the second one. While he admits that some were afraid, he went on to say that fear was OK, but courage triumphs over fear.

The man said that a World War II veteran taught him that fear was: False Evidence Appearing Real -or- Face Everything And Recover.

The gentleman continued by saying that “courage is just having fear, but still doing what you know the right thing to do is even when you’re afraid.”

“Even when I’m shaking and scared, I’ll still stand up for freedom,” he exhorted. “We all need to do that.”

Speaking of the medals pinned on his shirt, he said, “These medals mean nothing without these Australians, us, as a team. We’re a brotherhood, a sisterhood. I have a wife, I have children. I’m a human.”

Then he went on to slap the woke crowd.

He then brought it to the crescendo: “If you’re a human and you want freedom and you don’t want to be caged, come with us!”

Now, watch and listen to it for yourself. You’ll be encouraged, even if you aren’t in Australia.