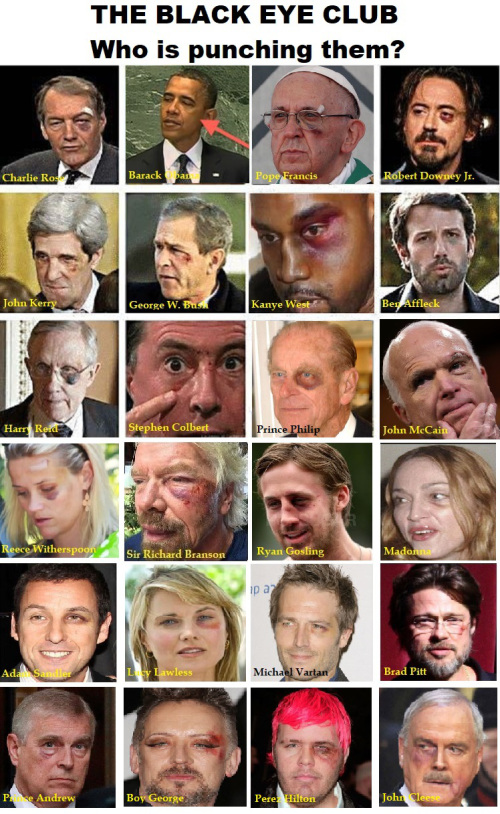 A ”black eye” (aka shiner or periorbital hematoma) is a bruise to the eyelid skin caused by blunt trauma to the eye region. Like many bruises, a “black eye” is usually nothing to worry about and will disappear in 1-2 weeks.

Do you remember the “black eyes” that former Senator Harry Reid (D-NV) sustained in 2011 and again on New Year’s Day 2015, which he attributed, respectively, to falling while jogging and an elastic exercise band that had snapped?

I’ve never had a black eye, nor do I know anyone in my circle of family, friends, colleagues and acquaintances who has had one.

So it’s most curious that so many public figures and “celebrities” have had a black eye.

Nor can their black eye be explained by cosmetic surgery because I doubt if people get plastic surgery on their eyelid one eye at a time.

More curious still is why these public figures chose not to conceal their black-eye bruises with makeup.

On July 20, 2018, Ent Lawyer of Crazy Days and Nights published this blind item that an actress “delayed” getting a black eye, which implies that the black eye is a conscious choice on her part:

This A+ list mostly movie actress who is also doing all kinds of television now and is an Academy Award winner/nominee and has multiple side gigs delayed by over a year her black eye just because she was so scared of what the pain was going to be like. Now, she is the one who others turn to for advice on how best to deal with the fear and pain.

On the same day, the UK Daily Mail published an article on a “bizarre conspiracy theory” that celebrities, including the Pope and even British royals, who have been photographed with black left eyes are in the secret Illuminati society. The eye bruises are attributed to a high-level “initiation ritual,” during which the pledger is forced to “eat pain” in a quest to become more powerful. The bruised left eye has also been referred to as the ‘Illuminati shiner’, a mark given to those who have scaled their way to the top of the elite pyramid.

Author and internet radio show host Sherry Shriner — who wrote the book Interview With The Devil, in which she claimed to converse with Lucifer — maintained government leaders, people on TV with their own shows and hundreds of popular entertainers have sold their souls to Satan.

Shriner, who died earlier this year, claimed that all the powerful people in the world have been soul scalped: “You cannot be on TV now, without signing on the dotted line. The bizarre recurrence of facial bruises on Illuminati politicians and entertainers has resulted in speculation that their souls have been replaced in a satanic ritual called ‘soul scalping’.” Shriner said “soul scalping” can be done in a number of ritualistic ways, all of which result in a demonic “possession”, whereby the human soul is removed and the body taken over by the demonic entity.

The politicians and celebrities who have sported a black eye all gave various explanations for their bruises. As examples (source: Daily Mail):

Some researchers link the bearers of black eyes to the worship of the Egyptian sun god Horus, whose left eye was black, representing the moon, and whose right eye was white, representing the sun. The story goes that Horus lost his left eye in a fight with his brother Set.

In an article on AmericaFirstPatriots, Noah Christopher questioned why so many politicians have black eyes:

Sure, it’s possible that a bunch of politicians just randomly started running into things and getting black eyes all around the same time. And sure, some like McCain have very rational explanations like medical treatment, but I find it fairly odd….

Kinda weird right? All in the same spot. All happening about the same time. Same kind of look, right below the left eye….

A lot of really careless people, losing balance and running into things?

The skeptic would say these are all secret society people and this reeks of some sort of ritual.

Corey Daniel of The Phoenix Enigma calls the elites with black eyes the Black Eye Club:

Although not officially an organization at all, the “Black Eye” club refers to a growing number of politicians, celebrities, business elites, and heads of State who have suddenly and mysteriously wound up with black eyes. Although a few of them have sustained injuries to their right eye, the majority occur on the left. Among those who have succumbed to this affliction are George Bush, Kanye West, and the Pope.

But why this current and periodic rash of Black Eyes? And why has this phenomenon disproportionately afflicted people of considerable power and influence? Even allowing for our modern 24-hour news cycle and tabloid cellphone camera culture, up until the year 2000 I can’t recall any publically recognizable figures having black eyes….

What about all the other hands covering one eye found all over entertainment and media?….